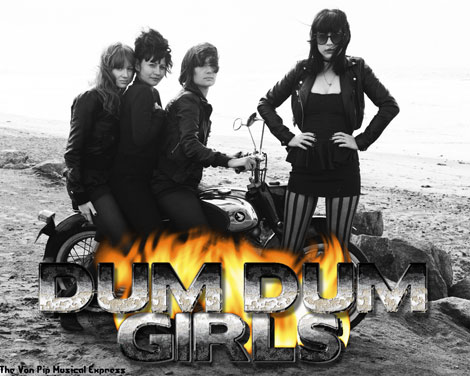 If you’re a sucker for scuzzy guitars, Spector-esque drum beats and the head down, insouciance of the Ramones, then chances are you will adore Brooklyn’s latest buzz band, Dum Dum Girls.

Their début album for the legendary Sub-Pop label, “I Will Be” is a raw, adrenaline fuelled white knuckle ride through heartbreak and B-movie cool which employs Ronettes style vocal harmonies allied to discordant Mary Chain guitars and old school garage punk. Clocking in at just under half an hour and containing only two songs that last longer than three minutes “I Will Be” could never be considered a concept album, in fact you get the feeling that Dum Dum Girls would consider any song that lingered over the four minute mark to be an exercise in pomposity and self indulgence. Prog rock they certainly ain’t ! However the collection of tunes on offer here are short, sharp blasts of sheer melodic joy combining carefully constructed pop hooks with a definite D.I.Y. garage band vibe. It’s a testament to the quality of songs on “I Will Be” that literally every track could be a single and suggests that Dum Dum Girls head honcho Dee-Dee is song-writing talent to be to be reckoned with.

If you’re looking for self important, overproduced stadium rock then this may not be album for you, on the other hand if you’re in the market for a fizzing slice of  blissed out indie pop punk  perfection then you need look no further than Dum-Dum Girls. A quite wonderful début.

It’s a busy time for the band but we grabbed a quick work with Dee-Dee who most certainly isn’t Dum Dum.

VP: Dum Dum Girls apparently started out as a ‘one girl garage project’. What was your initial aim and how did the band evolve?

Dee-Dee:  It was just a way to pass a lot of lonely and frustrated time.  I never expected it to land me here.  I wrote and recorded enough songs for a few releases, and once I signed to Sub Pop and finished the album, I wanted to take it out of the bedroom.

VP: Your debut album ‘I Will Be’ has just been released, it’s managed to retain a really raw honest indie vibe. Was it your intention to produce something that was a true representation of your sound rather then something that sounded overproduced thereby losing its energy and power?

Dee-Dee:  I wanted to retain the general sound of earlier releases, but also show some progress.  What Richard Gottehrer did for it can be summed up as “gentle finessing” — improving the fidelity and helping showcase the vocals.

VP:  A Ramones/Blondie/Phil Spector early punk type vibe definitely comes across (to me at least) on your album, would you say these sort of bands are ones who have primarily influenced you?

Dee-Dee:  Ramones and Phil Spector more so than Blondie, but there all are sorts of things that have gone into my head and shaped the kind of sound I want my songs to have.

Dee-Dee:  Surreal.  He is so personable, though, that it was a really easy and natural partnership.

VP:  You started our as a drummer? What made you switch to guitar?

Dee-Dee: Have you tried writing songs on drums? ;)

VP:  You’ve said in the past that you’re obsessed with big chorus’s, so was it important to you to make every album track sound like it could be a potential single?

Dee-Dee:  Not in such a contrived manner, but yes, I definitely want every song I write and record to be memorable like a single.

Dee-Dee:   Hit the road with my ladies.

VP: When you’re not immersing yourself in music how do you relax?

Dee-Dee:  I’m always immersed in some manner, but I do spend a lot of time with my family, friends, and cat.

VP: Five words which could sum up your album for us Brits ;)

0 thoughts on “Shooting From The Hip – Dum Dum Girls Interview”