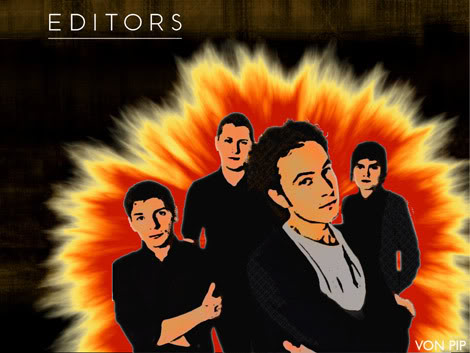 From the moment Tom Smith’s dark brooding vocals echo through the darkness and launch into “An End Has A Start” you just know this is going to be a special night. This is my first experience of an Editors gig and I wondered if they would live up to their reputation of being one of the best live acts around. Smith doesn’t really indulge in a lot of banter between songs other then the perfunctory “thanks” “how are you?”, polite and to the point… but what he lacks in repartee he makes up for in terms of his performance. He gives absolutely everything , heart and soul, sounding at times like the long lost son of Andrew Eldritch, and lets face it we’ve come here for the music not witty banter. When he isn’t prowling the stage like a caged tiger guitar in hand, full of nervous energy, he’s clambering onto drum kits and piano’s like a rangy mountain goat with ADHD ! At one point I thought he might actually attempt to clamber up the industrial structure which was used as the stage backdrop, a difficult task given that its in 2D.

The band mix melancholy with hope, joy with despair and the show crackled a long at a blistering pace, the live sound being one of the best I’ve ever heard. Tom’s growing his hair these days , and, well, to be honest- the gel ain’t working- the more energy he expends the more unkempt his hair becomes, it appeared to be expanding at such an alarming rate that at one point he started to resemble Side Show Bob crossed with Art Garfunkel. This is a band who certainly give it their all, the energy levels never once dropping as Smith span around the stage playing the guitar on his head or hurtling around like a demented marionette, switching between fast paced classics like “Blood” to their slower, more reflective numbers with consummate ease. By the time “Munich” is played the crowd are eating out of the palm of his hand as a huge great burly shaven headed scouser next to me, sings with genuine emotion, about people being “fragile things.” Editors proved that they truly are one of the best live acts you’re likely to see , and this was a gig that will live long in the memory. To quote them “I’m so glad I’ve found this, I’m so glad I did.”