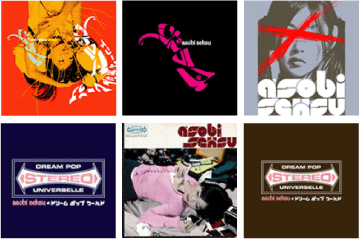 Bursting out of the New York scene in 2004, Asobi Seksu’s self titled debut album received huge critical acclaim, with rave reviews in the New York Times, MTV playlist exposure, and playing to packed houses  throughout the city. The band had fans of Lush and My Bloody Valentine dancing with delight with their sonic white noise wall of sound, layered guitars, effect pedals and dreamy vocals ….. now they are back with their second album “Citrus” in which they raise their game to an even higher standard. Juxtaposing James’ swirling crashing guitars which soar like waves before crashing around Yuki’s sweet angelic vocals, the band have kept the spirit of the debut album and whilst they have developed their sound they have produced an album awash with great songs and hooks. It’s a sound that possibly reveals more of their pop sensibilities than the previous album and  of band growing and developing into something very, very special. Switching between Japanese and English narratives Asobi Seksu produce the sort dreamy textured furious beauty that we haven’t heard since the time bands from the famous 4ad record label once ruled the indie scene in the 90’s, (“hardcore Cocteau Twins ” anyone ?) Currently touring Europe and the UK Yuki took some time out to discuss the Asobi Seksu story…..

VP: Tell us the story of how you all met and what prompted you to form a band?

YUKI :I met James in college (university!) in Manhattan. It was actually a music school. I was playing classical piano at the time and when James asked me to be in his band, I was very unsure and self-conscious about it. I went from that to fronting it….Very weird turn of events for me! But I couldn’t be happier that it turned out this way.

VP: Your name ” Asobi Seksu ” what does it mean ,how did you come to choose it ?

YUKI : It means playful sex in Japanese slang. James liked how it sounded phonetically and didn’t seem to mind the meaning either! I was embarrassed at first. I know my parents aren’t crazy about it!

VP : Your second album “Citrus ” Has just been released in the UK on One Little Indian …How different was the recording process from that of your debut album

VP: Who are your musical heroes/ sources of inspiration ?

YUKI : There are so many….I love The Shangri-Las, The Ramones, The Velvet Underground, Spiritualized, Nas, Wu Tang, Wilson Pickett, all the Stax stuff, Kahimi Karie, Bach played by Glenn Gould, Chopin played by Rubenstein, Mozart. Hearing Mozart as a 4 year old was made me want to make music. I wanted to be able to make sounds “like that.” I did play classical piano for years, so yes that makes me a nerd. But no one’s voice moves me the way Aretha Franklin’s does. Sometimes I dream that I can express myself the way she does….Funny thing is that supposedly James has a recurring nightmare that Aretha is really mean and talks trash to him!

VP: You’re based in NYC Which always seems to have an interesting scene. Apart form yourselves who would you say are the current buzz bands ?

VP: Its been said that the Pop single is dead in the U.S, do bands over there still release them ? How do you see the future in terms of music, does this make gigging more important than ever in this digital age?

VP: You were initially compared to UK bands such as My Bloody Valentine And Lush , did you take this as a compliment or do constant comparisons to the past as points of reference become tiresome?

YUKI : Yeah, I understand why those comparisons exist and I don’t disagree with them. We are obviously fans of those bands and we are glad that they spear headed that sound/texture for us to play with, but but I think calling us “shoegaze” is a 1 dimensional way to describe what we do.

VP: What’s have been your highlights of your time together thus far ?

YUKI : Taking Will, our sometimes Farfisa player and making him into a toilet paper mummy at 3am in some hotel in Atlanta, Georgia.

VP: Use Five (possibly in Japanese?) to sum up your sound