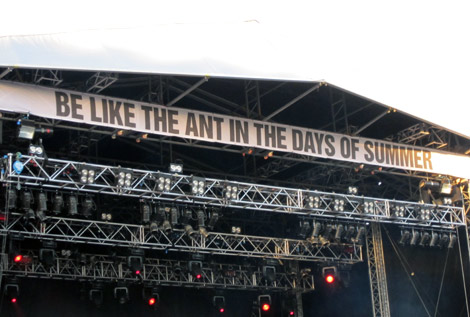 So when is a festival really a festival and when is it  just a bunch of bands in a field?  Harriet Pittard investigates for the VPME.

Why would anyone want to be an ant in summer? Perhaps the organisers (Eat Your Own Ears) thought that if they brainwashed lots of drunk people into believing they were ants then they wouldn’t mind the fact that there were far too many of them on one patch of park?
Here is a picture of some “ants” queuing…

There was lots of queuing to be done, particularly at the entrance.

Another criticism, before any live music can even be mentioned, is that it was nearly impossible for anyone to find out what the heck was going on. Not even the artists on the bill had a clue…

According to the rumours, the stage and set time information was withheld in an attempt to lure you into buying the over-priced programme on site. Fortunately some people had made their own programmes…

After lots of queuing and confused attempts to find out what was happening and who was playing where, muddled minds were temporarily distracted by The Fall plodding on to the Eat Your Own Ears stage.  Mark E Smith may as well have had “I am only doing this for the money” tattooed on his forehead, which in turn left him having to deal with a disillusioned, arms-folded kind of crowd .

A little later into the afternoon, the wispy Bradford Cox (Atlas Sound) cast a spell on his adoring fans in the Adventures in the Beetroot Field tent. With his one-man dream machine of pedals he took us on an intricate and intimate journey through his most recent album Logos. He looked a little uncomfortable and even shaky when it came to the harmonica blowing, but his fragility only made the fans even more attentive.
A particular highlight was his song ‘Walkabout’ which was originally written and recorded as a duet with Noah Lennox AKA Panda Bear. Bradford’s voice aches with nostalgic pining for the past and it was hard not to be moved when he sang out to the crowd “what did you want to be, what did you want to see, when you grew up?”

As the hoards kept heading to the park the tiny Blogger’s Delight tent became a Blogger’s Nightmare. Being in there for Hudson Mohawke meant getting way too close and personal with drunken boys getting their grind on. However, the cramped conditions and sleazy vibes became worth the while (perhaps even complimentary) once his epic track ‘Fuse’ soared through the sweaty dozens.

After splashing about and watching people watch people (which is all that seems to go on in VIP areas) it was time to catch Caribou.

As they hit the stage people began to ease up. Phones were dead, ciders had settled in stomachs and strangers were swapping sun-glasses. The hazy sunset and Caribou’s disco dance delights including ‘Odessa’ and ‘Sun’ from their latest album ‘Swim’ almost made it feel like a real festival – not an over-crowded one-dayer in an urban, dusty, grassless park.