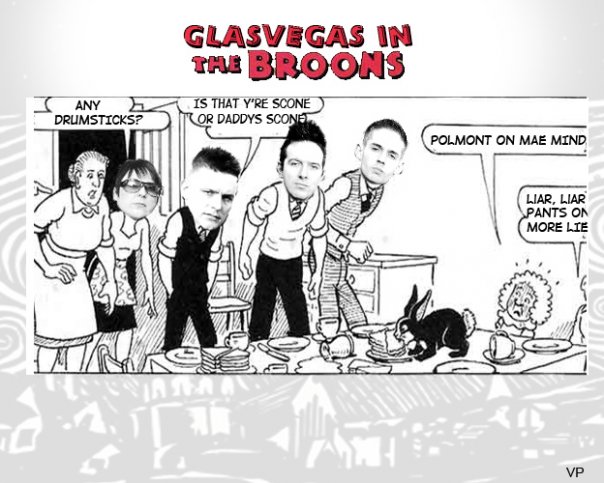 Glasvegas have had their critics, in the past, over hyped , dreary, Mary Chain wanna-bes etc, etc,  but having  previously defended  them this performance left me with no small amount of egg on my face , I was actually looking forward to seeing them headlining their  biggest  ever  tour …But oh dear ,oh dear ,  tonight  at Liverpool Uni, maybe, just maybe,  I too,  caught  a glimpse of the emperors’ new clothes,  and I must confess,  I have  started to re-evaluate my fledgeling relationship with the band. For example, have we all thrust greatness upon Glasvegas  at far too early a stage in their career? Is it fair to do so ?   Do the band  believe the  hype already ? Have I been conned ?  Is James Allan Bono in waiting, or worse …?? Sadly, the  Liverpool show  was an extremely unpleasant experience from start to finish, from the badly organised venue,(as per  usual for  Liverpool Uni, which really  is one  the WORST venues in the area, Manchesters Uni is far more agreeable) to the aggressive drunken , under age White Lies fans, all pouts, shouts and stylised misery.  And all crushingly, dreary little turds to boot.

Upon entering the venue, there was a palpable sense of expectation and a tension in the air which later, sadly erupted into pockets of violence on a number of occasions. Kick offs and fist fights were developing left, right and centre, which certainly soured the occasion somewhat. Of course being threatened by a group of White Lies fans is about as intimidating as being reprimanded by John Inman armed with a feather duster, but was still, I must confess,  an irritant.

Having seen Glasvegas on a number of occasions during 2008, in smaller and better venues, I had thought there was potential  but this show just didn’t cut the mustard. It seemed to lack the sparkle and pizazz of last year’s shows. The sound mix was as  weak as freshly strained  cabbage water and all the qualities normally associated with the band , the passion,  the heart, and the  excitement seemed strangely lacking in what  could be described as, at best,  a subdued performance. Maybe being the first night of a long tour,  the band hadn’t  quite  settled into the touring  groove, or maybe we spied the first signs that a Bono-complex  is starting to manifest itself within Mr Allan, (hopefully not, but only time will tell .) None of this mattered to the crowd, who seemed to treat Mr Allan’s mere presence on stage with the sort of reverence the Santalese reserve for their Sun God. It also appears that the “band of the people” tag that’s been thrust upon Glasvegas is now attracting the Oasis/football fan type of sub-Neanderthal, who perhaps might not quite appreciate some of the subtleties within Allan’s song writing.  It was noticeable that the line which seemed to resonate and echo around the capacious vacuum between the ears of  these drooling oak-headed oafs  was in fact,  ” liar liar liar liar liar, pants on fire.”  A line which they heartily embraced,  as if  they had discovered one  of the most insightful and deeply  meaningful lyrics  ever to be  set to popular music.

And oh dear, that cover version?  The sentiment I’m sure was entirely  genuine, a tribute to Ian McCulloch, who was apparently in the audience tonight, wearing James Allen style sunglasses no doubt, ( when they meet up it must be like an accident waiting to happen, like the time Ray Charles met Stevie Wonder ) although a cynic may think  it could also be interpreted as a  little bit of  a “indie luvvie-in”, but  if there has been a worse  cover of “The Killing Moon” I’ve yet to hear it ….  So where does it leave me and my relationship with Glasvegas?   I think it may well be  a case of “F**k You, it’s Over” as this sounded like somebody yodelling over the Mary Chains “Upside Down”, played backwards, down a well relayed via an ear trumpet. Horrid!

As for White Lies, I must confess, I did have a surreptitious love affair with the overblown  gloom-fest  that was  “Death” but  any band that cites the Killers as a massive influence should be treated with extreme caution, if not avoided altogether…Let us not forget that White Lies where not so long ago, a lighter, cuddlier, indie pop collective called Fear Of Flying a band who made a huge impression on ,erm  ….well, nobody really , and happily stated they were  influenced by  the likes of Paul Simon, The Talking Heads and (probably) Alan Sugar   …But how times have changed ….in what appears to be a cynical  cash in on the popularity of gloomy post punk angst they’ve changed their name,  started to dress in black, and produced studied, heavily stylised songs that veered towards the maudlin side of pop. You know the sort,  all about fear, dying, death, fear of dying, fear of dying a death .  Dying a death somehow seemed apt as their rather unconvincing performance left much to be desired , but hang on… whats going on??   The crowd reaction verged on  orgasmic, a  baffling response and one which can only be explained   by cheap cider, hormones a go-go  and fake ID’s. Regrettably the overall impression that just couldn’t  be dislodged , was that I had just been watching Scouting for Girls enjoying an Editors themed Karaoke night, or maybe  Keane, having a hissy fit  or if you prefer, a Matalan Joy Division for the X box generation. I suppose there are worse ways to spend a Thursday night –I just couldn’t think of any !

The whole evening left me confused, bruised and deeply disappointed.  I make no apologies for sounding negative as a night which promised so much, delivered so little.  But maybe the last word should go to my friend,  a veteran gig goer , who simply said “ Well that made  me yearn for a F*cking Phil Collins come back” He and Alan McGee may have some common ground after all (http://www.guardian.co.uk/music/musicblog/2009/jan/13/phil-collins-non-ironic-revival). Me ? I’ll wait for the non ironic Alan McGee revival thanks.

“Death” by White Lies Live . Does it look fun ?