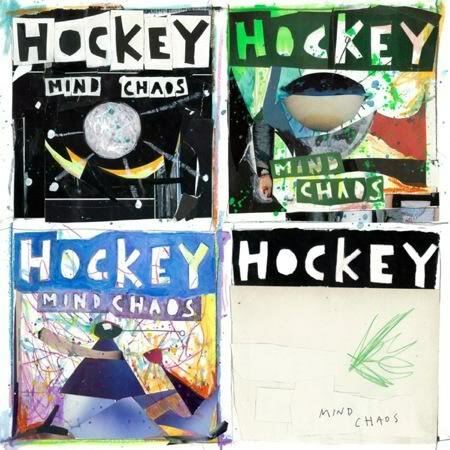 Hockey’s debut album “Mind Chaos” has been a long time coming, there have been a few false starts along the way but ultimately it’s been well worth the wait. Described by the band as “new wave soul” “Mind Chaos” is an album that draws on a myriad of musical styles and melds them together to produce an album that is danceable, exciting and coherent. Any concerns that such an eclectic variety of influences could produce an uneven album lacking in direction and focus are quickly allayed as “Mind Chaos” serves to reinforce the view that bands diversity and ability to surprise is in fact their strength.

The album kicks off with their recent debut single, the soaring “Too Fake ”, a rip roaring anthem that seems to be fuelled by anger and regret, yet conversely still manges to sound upbeat and euphoric. It’s exactly this kind of  juxtaposition of conflicting emotions coupled with their innovative collision of styles and themes that is rapidly becoming Hockey’s trademark. “3Am Spanish” is full on funk attack and sounds like The Beastie Boys hanging with MGMT down at Studio 54 , whilst “Wanna Be Black” could be Bob Dylan  jamming with LCD  Soundsystem as Isaac Hayes asks that age old metaphysical question “Can you dig it?” (Quite clearly they can!) Elsewhere the ludicrously infectious Spingsteen-esque“Song Away” is a festival anthem in waiting with a vocal delivery reminiscent of how Lou Reed may have sounded if he’d stepped into the light and dropped a few “Es!”  As if the album isn’t varied enough Hockey even throw in a few a country infused numbers,  a particular highlight being “Four Holy Photos”  which recalls the ghost of a less dissolute Tom Waits minus the throaty atmospheric croak. Throughout the album the guitars veer from Nile Rodgers “get on down” influenced disco funk to 70’s infused Paul Kossoff guitar riffs all underpinned by the funkiest bass lines since Grandmaster Flash and Funkadelic got their funk on at the worldwide festival of funk on National Funk Day .

“Mind Chaos” is a  debut that announces just what Hockey have to offer, it’s full of smart  lyrics, gritty vocals and phat 80’s grooves and it deftly manages to pay homage to a variety of styles and eras but isn’t restricted by them. Who said bike riding vegans can’t be hip ? If  Huggy Bear had opened an ice cream parlour in Antarctica it wouldn’t be half as cool as “Mind Chaos”. To paraphrase the cult Inspiral Carpets T-shirt of the late 80s,“Mind Chaos” proves Hockey are  “As Cool As Puck”, success it would seem is just a “Song Away” 8/10