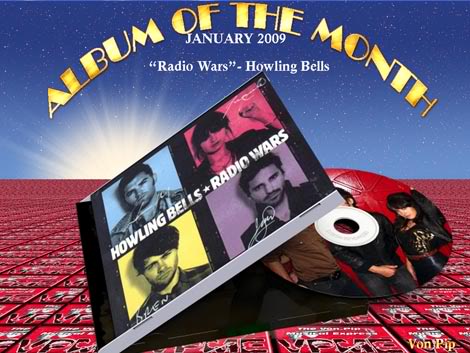 “Into The Chaos” By Howling Bells

All hail the first great album of 2009 ! Howling Bells are back with a follow up to their stunning 2006 debut. Their latest album “Radio Wars” sees the band expanding their sound and moving forwards, yet still managing to retain the key elements that made their first album so hypnotic and exciting.

Listening to a Howling Bells album often feels like you’re being bewitched and slowly, subtly seduced, as they draw you into a world where beauty and nightmares are never far from the surface. Their songs are invariably haunting, menacing and unique, unique in the sense that you really couldn’t imagine anybody other than Juanita Stein singing them. She breaths life into each song, giving them depth, meaning and beauty, whilst the band provide the perfect stage upon which Juanita’s vocals can weave their subtle magic.

The bands next single “Cities Burning Down”  has a mesmerizing, futuristic, post apocalyptic vibe; one imagines if The Sunday’s Harriet Wheeler had fronted Joy Division, it would sound something like this. “Radio Wars” is without doubt the sound of a band on top form, fully focused, who know exactly where they want to go. Yes, maybe the production has been ratcheted up a notch ; it is not however, a band radically changing direction, as some feared. The album is a natural progression from the  eponymous debut, and as such should delight old fans, whilst reaching out to a new audience, which will hopefully lead to them adding to their already dedicated fan base.

Of the many highlights notable tracks are “ It Ain’t You” ( a future single surely) “Nightingale” which is thing of shimmering gorgeousness, a beautiful sultry Gothic lullaby, that is both moody and beguiling, whilst lead single “Into The Chaos” is an insistent, driving slice of cinematic pop. Not every track hits its mark, “Mrs. Bells Song (Theme from Radio Wars) ” has a rather unconventional outro, as the band inform us “Radio Wars are coming/ they’re here” but it fits perfectly with the sweeping, futuristic feel of the album. Then again, Howling Bells songs can often take a number of listens before you “get them”. “Golden Web” is a great song, but  was  having Juanita’s sentences being finished by one of the chaps in the chorus, strictly necessary?  However these are but minor quibbles, and the albums penultimate track “Digital Hearts” provides a glorious final flurry of moody magnificence ahead of the sensational closer,the  country infused “How Long.” Juanita’s sublime voice invokes memories of the velvety siren tones of Hope Sandoval at her sultry, seductive best as she laments “How long before I let you go/ how long before I let it show.” It’s quite magnificent and a  fitting climax to a fabulous album.This is an  album that takes the listener on a journey through  a myriad of differing emotions, and leaves them exhausted, but ultimately satisfied. Howling Bells truly have the ability to illuminate the darkness and paint the sky with stars.

“Cities Burning Down” By Howling Bells