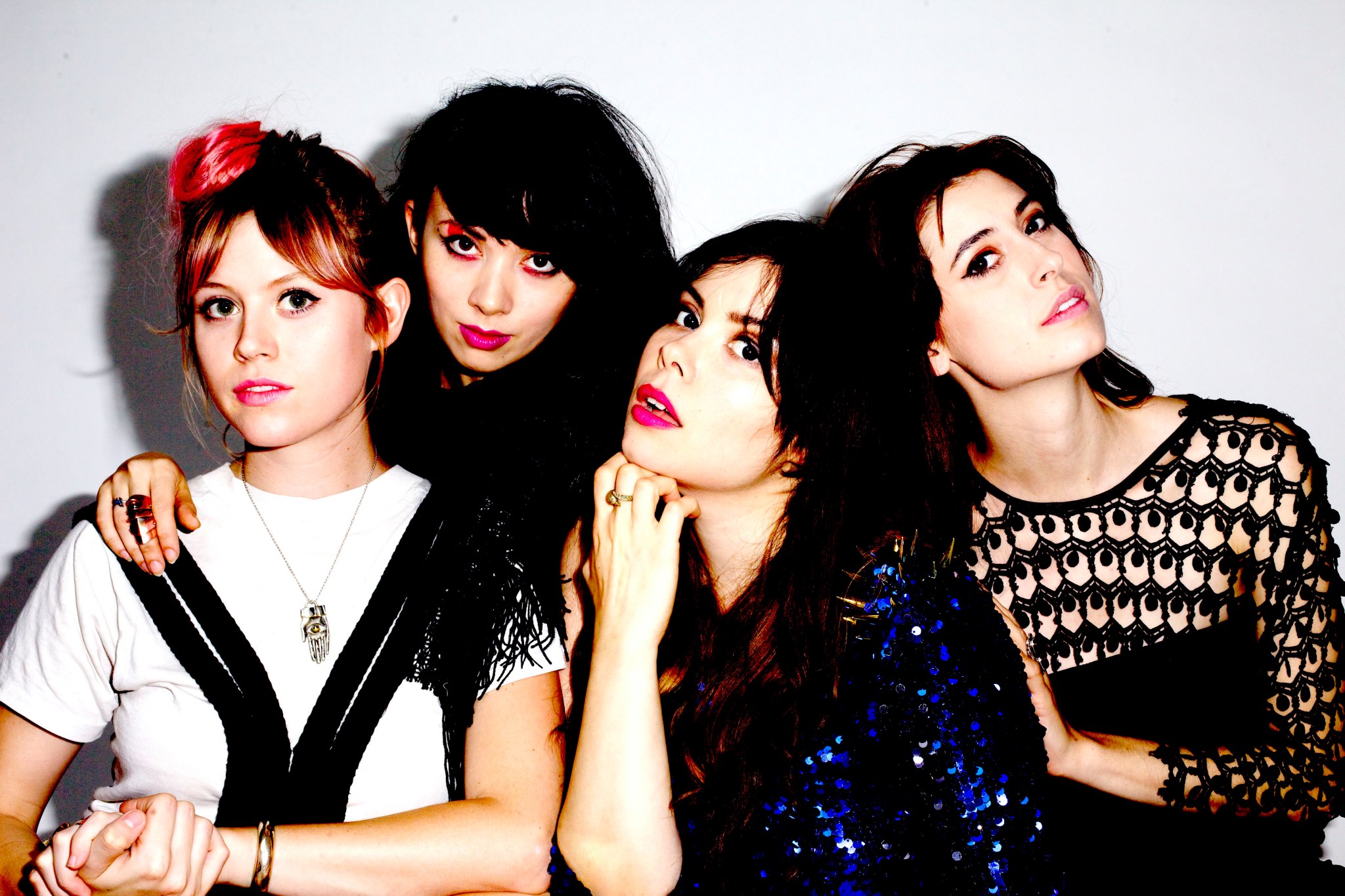 FEATHERS, one of our top tips for 2013 are set to release their début album “If All Now Here” on April 15th. Happily we can report that it’s a genuinely fabulous début from a collective who look set for great things this year.  The driving creative force behind this musical tour de force is former Cruel Black Dove singer-songwriter Anastasia Dimou who hasn’t so much reinvented herself; she’s found herself with the creation of the dark swirling synthgaze female collective that is FEATHERS.  With a live line up that  varies from a 4 to a 5-piece, including Galexy Gehring (Ringo Deathstarr), Destiny Montague (Shock Cinema/Midnight Masses),  Courtney Voss (The Vomettes) and Kathleen Carmichael, Feathers have already generated substantial buzz at this years SXSW having performed with the legendary Dépêche Mode.

The remarkable aspect of Feathers stunning début is that it arrives so fully formed, so gloriously realised.  There are no fillers, each song is beautifully crafted and constructed, furnished with just the right amount of polish to create a wonderfully immersive dark electro pop soundscape.  Dimou creates an enticing atmosphere of elegiac foreboding, combining sensual celestial vocals with killer pop hooks to produce a collection of songs that manage to sound innovative and edgy but should also have a broad appeal.

‘Fire in the Night’ is an object lesson in intelligent dark pop, ‘Land of the Innocent’ is the sort of driving electronic symphony that Depeche Mode would kill to have in their repertoire, whilst the laconic swagger of ‘Dream Song’ sounds a little like a Mazzy Star/Jesus and Mary Chain collaboration.  If like us you like dark, intelligent pop music with an undercurrent of mystical eastern allure performed by, let’s face it , a band who would give Cleopatra a run for her money, then Feathers are the band for you.  Definitely an early album of the year contender!

We met up with the Anastasia and had a chat about the evolution of Feathers from solo project to one of the most exciting new musical collectives around !

VP: Feathers seemed to be initially termed, as ‘the song writing project of Anastasia Dimou’ is that how it all began.  How did you evolve into a band?

ANASTASIA : I wrote the songs, some were works in progress before I moved to Austin, and I recorded them myself but I knew I needed to assemble people to play live with me.  I could do it myself like a lot of people do, but I didn’t want that.  I wanted a real bass and the movement of drums, and I didn’t really want a revolving cast of members, which ends up being a lot more work. Creating music by yourself is one thing, but putting it out there is another, and I really love the gang mentality of being in a band.  It feels amazing to have formidable co-conspirators.  We travel and hunt as a pack.

VP: Your last band did have a dark almost gothy Curve kind of vibe, as a songwriter and performer did you feel somewhat constrained by a particular scene or genre that Cruel Black Dove may have been linked to?

ANASTASIA : I did.  I am still very close to those bandmates, but I needed to break out.  We wrote as a pair, Alan and I, and he had a very specific sound he wanted to stick to.  I felt like I wanted to try all kinds of things and really have more say in the production.  Also, I feel like the people around us were pushing us in an aesthetic direction I didn’t at all see myself in.  We were moving farther and father away from what I originally envisioned for the band.

VP: You certainly sound freer with Feathers – would it be fair to say that Feathers is more the real you?  Killer tunes with a hint of dark menacing seduction bubbling under ?

ANASTASIA : Yes  :-) I think so.  I think that is the journey all songwriters are on…  that never ending quest to create that song that resonates inside.

VP: And moving from NYC to Austin, did that have a massive effect on your song writing? For example Cruel Black Dove’s music had a kind of intense claustrophobic vibe where as Feathers sound is imbued with a much more spacious,  expansive, sweeping cinematic atmosphere.

ANASTASIA : You are good. I think that vibe in CBD was definitely aided by the difficulties of living in NY as an artist. In addition to the logistical issues, I was having a hard time finding inspiration given the sound mandate handed to me by my band and the scene I found myself ensconced in.  In NY, people want to have you figured out and are quick to decide on what you are all about based on who you are hanging out with.  So we were kind of measuring ourselves against the sounds of our environment, which is natural when you’re surrounded by projects, but not an entirely free place to be creatively. Being there at the beginning of the witch house scene, for example, I was over it before it happened everywhere else.  And inside it did not feel true to my core, I really wanted to be more than that. Feathers and the move made everything feel like the world was all of a sudden opening up.

VP: Along with the swirling melodies, pulsing beats there’s a hint of eastern mysticism running through some of the songs. Would you possibly put this down to influences growing up as a kid ( your Dads from Greece right?) informing your artistic vision

ANASTASIA : I think it definitely informs me in all kinds of ways and has seeped into this record.  That entire side of the family still resides in Greece and I spent much of my childhood there.  And there is definitely a mysticism imbued in the culture, whether or not religious, that comes from being an ancient civilization, and living alongside the ruins of mythology.

VP: Where you encouraged musically as a kid?  Or was it something you came to as a teenager?

ANASTASIA : I was encouraged to play music, especially violin, which my father saw as a link to our heritage.  My parents did not ever expect for me to pursue music as a career though…  but in fairness, if you would have told me at 11 that I would, I’d probably not believe you.

VP: So your début single, a kind of beautifully elegiac space age love song,  ‘Land Of The Innocents’ was recently released ahead of the full album. What kind of things inspire you to write songs, are you somebody who writes based on your own real experiences or do you tend to imagine certain scenarios ?

ANASTASIA : Many of the songs on the record come from fragments of dreams/day dreams, but I also write pulling from real experiences.  ‘Soft’ and ‘Believe’ are anchored in real life for example.  ‘Soft’ is kind of declaration of independence in some ways and ‘Believe’ is kind of all energy from experiencing love and lust.

VP: And your début album ‘ If All Now Here’ is due out in April – How long did it take to record and what are your stand out memories of the process?

ANASTASIA : It took a little over a year all together… The recording process takes longer when you are doing it yourself.  Then the mixing, and then sitting back and listening to it and committing… and reworking a few things.

VP: You’ve already played in The UK before at ATP in 2012 ?  How did you come to get involved in that line up ?

ANASTASIA : Our manager sent a few songs to Barry, and he came back a couple months later and said he liked it a lot, that he had been listening to it several times, and he offered us a slot to get us over to the UK.  It was really great.  Definitely a highlight of the last year.

VP: What’s the plan for 2013 – you are playing SXSW at the moment – I’ve never actually been but am told it’s amazing, how would you describe the event?

ANASTASIA :   Last year was interesting, because I was a new local.  This year, I am truly local.  I love it because all of my friends from NY and other cities come to town, and it really feels like a big party and in the weeks before you can almost feel the energy build.  And then after it, you’re exhausted and feel like you’ve earned a vacation.

VP: We’re currently experiencing a severe global recession and the arts and music grants/ funding/ investment are usually pretty low on the authorities spending priorities.  We firmly believe the arts are of massive importance, but how would you convince a non-believer of the importance of music and its transformative power?

ANASTASIA : I would say that there are many things to focus spending money on to make life possible and keep the world running, but it’s music and the arts that make life actually worth living.  Also, not offering creative outlets to young people limits them to a lifetime of mediocrity or worse if they aren’t given the chance to discover where their talents lay, especially if they aren’t academically inclined.

If All Now Here is released on  April 15th

1 thought on “If All Now Here – FEATHERS – Interview/ Album Review”