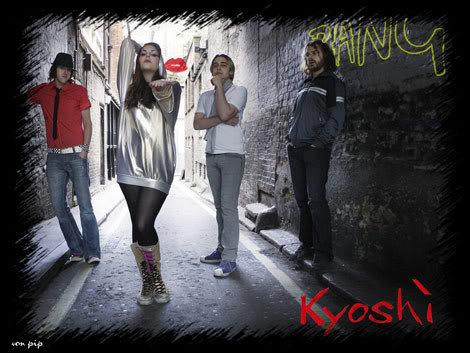 ” Your Own Beat” By Kyoshi

Leanne King, fronts Kyoshi, a band who originally formed in Leicester and have since upped sticks to do the ‘being in a band in London thing”. Now I don’t want to go all Tim Westwood on you, but Kyosi are “banging” and this girl’s got the attitude and the rhymes to enable them to make a make a huge impact in 2009.

Personally I’ve always had an ambivalent attitude towards Hip-Hop, and after hearing Grandmaster Flash’s sleep inducing comeback single, I was left with the impression that they had exhumed the corpse of hip-hop in a futile attempt to force one last breath from its decaying carrion. Indeed its stereotypical blandness merely served to confirm that the genres influence has waned to a point somewhere below “total insignificance”.  However Kyoshi appear to have extracted the best from Hip Hop,  given it a musical kiss of life and ripped up that  tired old template of yore for something much more dynamic and exciting.  They’ve mixed it up, ripped it up and flipped it inside out, fusing their own influences such as ska, Indie and pop, and have produced a sound that is fresh, imaginative, relevant and contemporary.

Kyoshi’s debut single “Bang!” on the surface, appears to  be the tale of an ex-boyfriend  who has all the physical dexterity of Norman Wisdom and it’s a tune that is  impossible to shift from your head from the moment you  first hear it. All three tracks on the debut clearly demonstrate the bands ability to produce tight beats and sing a long chorus’s whilst leaving an overriding impression of a band imbued with boundless energy, flair and vitality. In singer Leanne they have unearthed a genuinely talented, exciting  singer/ songwriter, who half sings, half raps and is blessed with both wit and wisdom.

We had a chat with Leanne to discover more about the world of Kyoshi.

VP: Initially things started off with Ben, Dan and Chris, did  you have to do much arm twisting to join?

LEANNE: Me and Dan would always sit around the house singing and playing songs when we were growing up so it was just a matter of my age really. I think I was 15 when we first got a band together. It happened really naturally.

VP: When you started out making music together did you have a definite idea of what sort of sound you wanted to make? Any disagreements about direction?

LEANNE: Our sound has developed organically. We always liked hip-hop and some dance music like Faithless but we love live instruments and guitar bands so I suppose we wanted to bring it all together in a new way. No disagreements really, we all play our own part in the way we sound.

VP:  Your debut single “Bang!” is due out on what’s it about?

LEANNE: ‘Bang‘ is a spiky sounding word. And the lyric ‘That sound follows you around’ sounds soft and rounded. When you listen to Kyoshi you’ll notice a lot of contrast, light and shade, tension and release. That’s what I initially focused on when I was writing “Bang!” The story itself is about a clumsy ex boyfriend but it’s also about the times we all have when things in life just keep recurring and incidents feel like they’re linked.

LEANNE: We’ve got some wicked new songs we’re just finishing off, a great track called ‘I Can’t Help Myself’ which people are really getting into at our gigs. We’ll be going in the studio some time soon and we’re gonna be playing out a lot around the UK in the summer too and maybe in Europe towards the end of the year.

VP: Who are your biggest musical influences?

LEANNE: I’m less influenced by other artists nowadays but when I was young, I loved Lauryn Hill’s ‘Miseducation Of’. She’s been a big influence on me musically. We grew up as a band listening to the Chilli Peppers, Fugees, Hendrix, Stone Roses. We’re all influenced by a lot of stuff: Chris like’s Led Zeppelin and Jamiroquai and Ben’s in to his reggae.

VP:  Where did the name Kyoshi come from? And does it have a special relevance for the band?

LEANNE: It’s a Zen word. Or it comes from a Zen word- Hyoshi. Dan saw the word and read it wrong! Kyoshi, to us, means ‘we are one’ and it stands for our togetherness as a band.

VP: Who writes the songs? Is it a collective thing or is there a main songwriter?

LEANNE: The only consistent thing about the way our songs come about is that I write the lyrics and melodies; any one of us could come up with an initial idea and we develop it together. It’s a collective thing.

VP:  There are a few strange things going on via the internet lately, some of the major labels have limited songs on myspace to 30 second clips, You tube has pulled all “Premium content” music videos. What do young, up and coming bands make of the way the industry is reacting to the “digital age”?

LEANNE: Well you can hear all our tracks on myspace so if people are missing full length songs, come and listen to ours! Ha ha! I just wanna make great music for people to listen to and feel something for 3 minutes. I don’t care how the industry react, if it’s good music people will like it and people will pay for it. Whether that’s pay to see it live or pay to own the track.

LEANNE: They’ve all got their merits but I’ll go for download coz it’s quick. I can get a song when I want it.

VP: If Kyoshi had a catchphrase, what would it be?

LEANNE: Good question. I just read a review of “Bang!” and it said we were cooler than Mike Skinner! We’ll have that as a catchphrase for now!

0 thoughts on “In With A Bang- Kyoshi Interview”