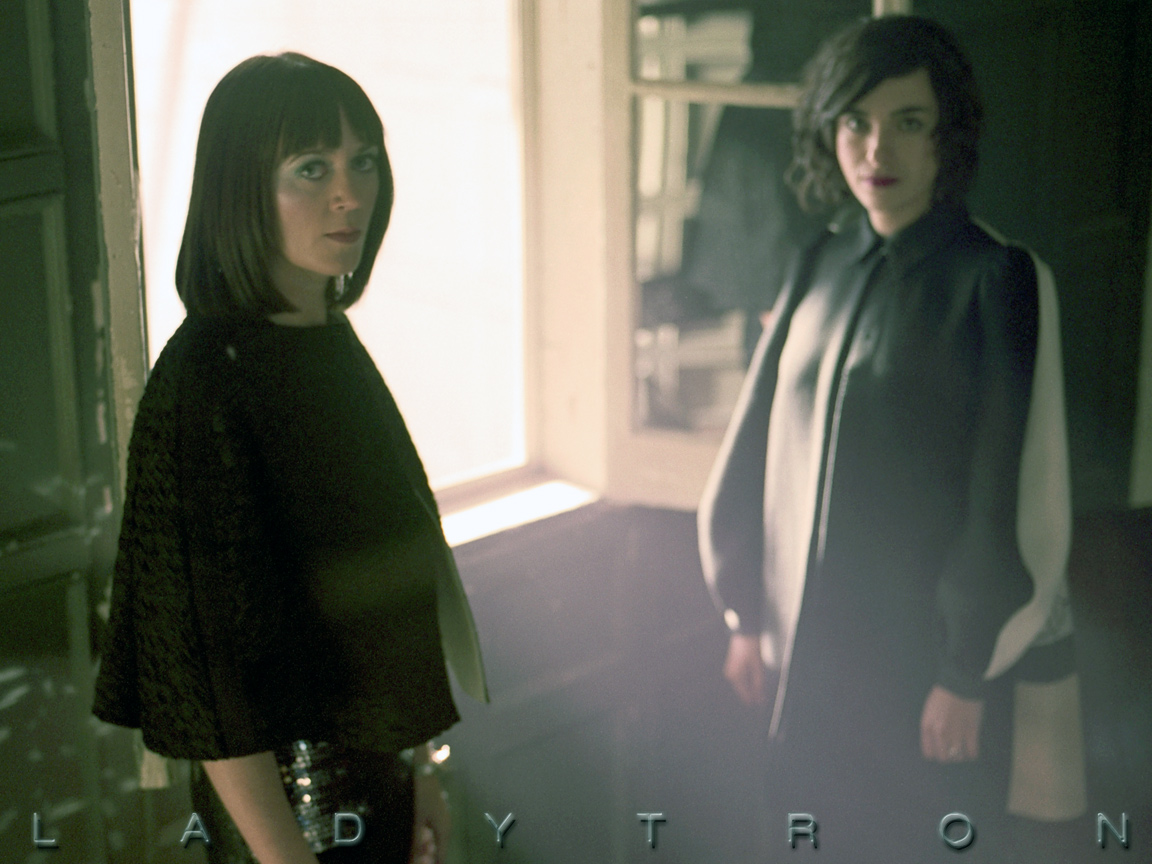 Brian Eno once described Ladytron as a band who posses “a full awareness of what’s happening everywhere in music which is interwoven to produce  something quite new”  they are, he went on to say, “the best of English pop music.”   And after revisiting the band’s recent career retrospective it would be rather difficult to argue with Mr Eno’s assessment. The “Best of Ladytron 00-10” served as a timely reminder as to why they have managed to stay at the forefront of  cutting edge music for over a decade,  and also why they have made a steady transition from influential cult band to national treasure.

They return with their fifth studio album ‘Gravity The Seducer’ which sculpts  a much more languid aural soundscape then the relentless, aggressive ‘hypno-tronic’ majesty  displayed on their last album, the epic ‘Velocifero.’  In many ways this is a far more considered piece of work with swirling, symphonic flourishes embellishing the inscrutable, frost fretted dual vocals of Helen Marnie and Mira Aroyo.   This is a slightly softer, cuddlier Ladytron than we are perhaps used to, a band confident, at ease and comfortable within their own musical skin. The lush elegance of opening track  ‘White Elephant’ sets the tone for an album that doesn’t strive for huge anthemic tunes but instead constructs a miasma of sensual languidity and doomed grandeur that is both haunting and soothing.  ‘Moon Palace’ sees Ladytron at their most glacial and imperious whilst the gorgeous ‘Transparent Days’ and ‘Melting Ice’ are nothing short of sublime. ‘Gravity The Seducer’ is full of beautiful, evocative, cinematic music imbued with dark throbbing undertones and although maybe not as commercial as previous works is every bit as satisfying. Fashions and fads may come and go but Ladytron will prevail because when it comes to making mature sophisticated electronic music of both style and substance, they have few equals.

I spoke to Helen with regard to the new album, the bands secret of longevity, and popular misconceptions about the band.

VP : Ladytron have always been at the cutting edge of music and yet never been part of any paticular scene. Is that pretty much how you’ve approached music, not really influenced by trends as such, just concentrated on producing the music you love.

HELEN : Yep, totally. The press has tried very hard to tie us to a particular genre or scene but I think we’ve managed to come through that and prove there’s a lot more to us. We’re not really interested in trends and when it comes to songwriting we do it the only way we know how. It’s a natural process. Generally we don’t listen to current music when writing for ourselves, it just makes things confusing. You need a clear head and space to think for ideas to develop.

VP : Your fifth album ‘Gravity the Seducer’ comes in the wake of a  greatest hits retrospective. How has the way you write and produce your albums changed over the years.  For example you have toured all over the world and an outsider may wonder when you have time to sit down and write.

HELEN : Well, up until about 2009 we literally hadn’t had a moment to sit down and write. We’d pretty much toured constantly since releasing Witching Hour. Thinking back now I’m not sure how we did it. Maybe youth helped. I can’t see us being able to handle that now. It was quite intense. From the autumn of 2009 we took a good years break. It was much needed for everyone’s sanity. In that time we gathered together tracks, wrote new ones, piled them into a pot and then decided which ones to work on for Gravity the Seducer. Generally we all write separately at home and then collaborate on tracks that require it. The writing process has always worked in the same way for us. We then take the songs into the studio where we mess around with instrumentation and layering, putting down lead vocals and harmonies. Building and building is the key.

VP : Every album you’ve released is different yet retains your own distinctive ‘Ladytron’ sound. Would you agree there’s a definite sweeping, more cinematic vibe this time around and was that your intention?

HELEN : Gravity the Seducer still sounds like Ladytron but perhaps just another, softer, side to Ladytron. We did want to create something a little different but you never really know what an album will sound like until you work on the tracks in the studio. The instrumentation available to us helped shape the sound, along with production techniques. The layering of vocals creates an air of lushness, and an ethereal glow. Velocifero was a much harder, more driven album and that was because of all the touring we’d done. At the time we wanted to create a more ‘live’ sound on record and Velocifero was the result. With Gravity we felt free to explore other options.

VP: What exactly does the title ‘Gravity the Seducer’ mean, who came up with it ?

HELEN : It’s a lyric from the song 90 Degrees which features on the album. It’s a lyric Danny came up with and it seemed to embody the entire album.

VP: You’ve composed music for video games, whilst Ace Of Hz was in the last Fifa game, some people take the rather fatuous  old school view that this somehow diminishes the music.  In the age of the download bands often have to look at innovative new ways to monetize their music, and the old Bill Hicks quote about selling out seems slightly irrelevant now. Even so are you careful about whom you license your music to? For example it’s about as likely for Morrissey’s music to be featured in the latest McDonalds ad campaign as it is for  Billy Bragg to compose a rousing Tory Conference sing-along. ;)

HELEN : I really don’t think there is any such thing as selling out these days. People have to understand that in order to continue making music as a band, like anybody else, we need to make money. We have no other source of income as Ladytron is our full time job. So many bands are forced onto the road for non stop touring as it’s the only way for them to make pennies, and this is partly due to the fact that people aren’t paying to buy their records any more. We’ve been very lucky. But most bands will not be. Of course it is not just about the money. If we’re really not into something then we won’t do it. No way. If we all agree on something then we will. It’s great to have support from games such as Fifa and The Sims. It also opens up our music to a whole different fan base.

VP : What’s been your weirdest experience as a band?

HELEN : There’s been a few. The most recent would be flying business class from China with Emirates. We were the only ones on the plane so ended up having our own private party with all the hostesses in the bar of the A380. It was pretty surreal. They took Polaroids of us all in their hats drinking champagne. They also told us we could have anything we wanted. I didn’t want to push it though. I recommend Emirates to everyone now.

VP:  Ladytron co-owned one of my favourite and most stylish  bars in Liverpool, the much missed Korova. After some licensing shenanigans it relocated  to Hope Street but never quite captured the atmosphere of the original, even less so  after it burnt down. Will it reopen and are you still involved with it?

HELEN : Well, it was Danny & Reuben who had a hand in Korova. Not quite co-owners. It was a great bar and live venue though. Danny is working on a new bar currently in Liverpool.

HELEN : We’re flying out to Mexico in 2 weeks for a gig and from there we will kick off our North American tour. In November we’ll be doing some South American dates then after that who knows.

VP : What’s the secret of the bands longevity?  I assume you all still adore each other’s company  and you’ve had no huge rock n roll style spats over the years?

HELEN : Oh, we’ve had our fair share of spats, but thankfully none that have rocked the boat too badly. It’s only natural I think. When you’re on tour for such long periods of time its hard being in each other’s pockets. But, we’ve learned how to deal with it. It’s important to get your own space. Your bunk is always there if you need to hide. On our upcoming US tour there are actually going to be about 4 girls on the bus which is unheard of. I’m hoping the bus smells like roses and daisies.

VP :  What would you say is the biggest misconception about Ladytron?