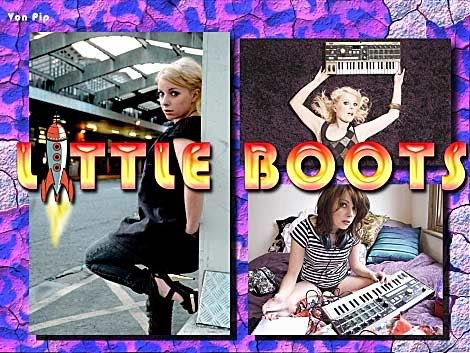 Unless you’ve been living in a cave or possibly Northampton you will surely be familiar with the name Little Boots. Apparently the whole future of pop music rests on her slender shoulders.  I was first alerted to the existence of this musical entity by Victoria “Little Boots” Hesketh herself!  Having completed an interview with a band with whom Ms H was lead vocalist, the excellent Dead Disco (interview here), I received a message from her saying that she was sorry if she’d messed up my interview  “I have actually left the band now I hope they do well as it’s a great band and Lucy and Marie are very talented musicians. I have a new project, it’s called Little Boots but it’s still in the very early stages, it’s more pop/ electronic.” I wished her good luck and heard nothing more on the Little Boots front until… she re-emerged surfing a monumental tidal wave of hype which threatened to completely engulf her.  She was hailed somewhat absurdly, as the “saviour of pop” before she’d released a solitary tune,  sniffy critics were unimpressed and many were quick to distance themselves from the delirium that surrounded Miss Boots.  Sensibly Victoria and her team didn’t rush to release the debut album “Hands” but quietly got on with the business of producing the album they wanted to make. Now some six months after the initial bout of Boots induced  mass hysteria, the waters of pop are somewhat calmer and the album has finally arrived, the question is, does it live up to the hyperbole?  Is she the “future of pop?” Or is she a  Cbeebies version of Goldfrapp.

The proof, as they say, is in the pudding and upon listening to the album it appears the hype is somewhat justified as Little Boots comes very close to producing the prefect pop album. “Hands” is a pop behemoth, its big, its brash and it’s full of energy and enthusiasm. The choice of “New in Town”, as lead single was difficult to fathom  and although it’s a grower I still can’t shake the impression that Victoria was watching TV the day she wrote this one and the annoying  “Here Comes The Girls” ad for Boots The Chemist ( no relation) somehow burrowed its way into her consciousness. Things really kick off in earnest with the euphoric tranced out rush of “Earthquake”, indeed experts may one day declare this tune the ultimate example of how to write and produce the perfect commercial pop song.  It’s a song that grabs you by your skinny tie and hurls you around the dance floor with carefree abandon; it also boasts a chorus bigger than Blackpool tower.

Other highlights include “Mathematics” a killer pop tune, Victoria may well not know her “Fibonacci or Pythagoras” but she certainly knows the formulae for making glittering, danceable pop. “Click” is the sort of song much beloved by 80’s teen flick maestro John Hughes; one can almost imagine it playing in the background whilst Hughes zooms in on Molly Ringwald’s strangely appealing face. Molly looks reflective, as she stoically tries to recover from yet another broken heart, a single tear slowly slides down her alabaster skin…. “Tune Into My Heart” keeps things firmly in the 80’s pop arena and conjures up memories of “Let’s Hear It For The Boy” from “Footloose” unfortunately this also invokes the unwelcome spectre of absurdly mulleted Kevin Bacon, replete in tie dyed jeans enthusing “Hey, hey! What’s this I see? I thought this was a party. LET’S DANCE!” Like Thatcherism and “The Hit Man And Her” some things from the 80’s should never be revisited!

“Symmetry” features a duet with Christian Bale in Batman mode sound alike, Phil Oakey. It compares favourably with anything on the Human League’s breakthrough pop classic “Dare” and works fantastically well. Doubtless it will inspire the young ‘uns to investigate The Human Leagues back catalogue and one wonders what they will make of tracks such as “A Crow And A Baby” and “Empire State Human”

Not everything comes off; there are a couple of tracks that would surely be welcomed by Bernard Matthews with open arms. “Ghosts” for example is a real clunker; the idea may well have been to produce a slightly off kilter, kooky 80’s style Kate Bush inspired number. Unfortunately the song lumbers about with all the grace of Hagrid’s clumsy brother Grawp (from Harry Potter) before tripping over its ambition and landing on its bottom in an undignified heap.  “Remedy” is pure Euro kitsch, camper than God’s own panto dame Christopher Biggins performing “Go West” and will probably be everybody’s holiday song this year. Imagine a Lithuanian Laura Branigan performing at the Eurovision and you’re in the right ball park….But these are but minor gripes, on the whole if it’s a pure pop album you’re looking for, you can’t go wrong getting your hands on erm..  “Hands”! Unlike the personality vacuum that is the empty pop machine known as Girls Aloud, “Hands” has Hesketh’s pop vision running throughout,   like embossed letters through Blackpool rock. It won’t change your life, indeed one suspects that if you’re looking to Pop music to help initiate that sort of change, you’re looking in completely the wrong area (join a gym, read Dostoyevsky, change your job). That’s not to say “Hands” is artless or disposable, far from it, at its best it delivers highly sophisticated pop that pretty much makes Kylies back catalogue seem redundant.   It’s joyous crowd pleasing music of the highest order and doubtless will fill various dance floors up and down the country and provide the soundtrack to a cracking good night out, and do you know what?  Sometimes that’s all you need from pop music, innit?

“New In Town” By Little Boots