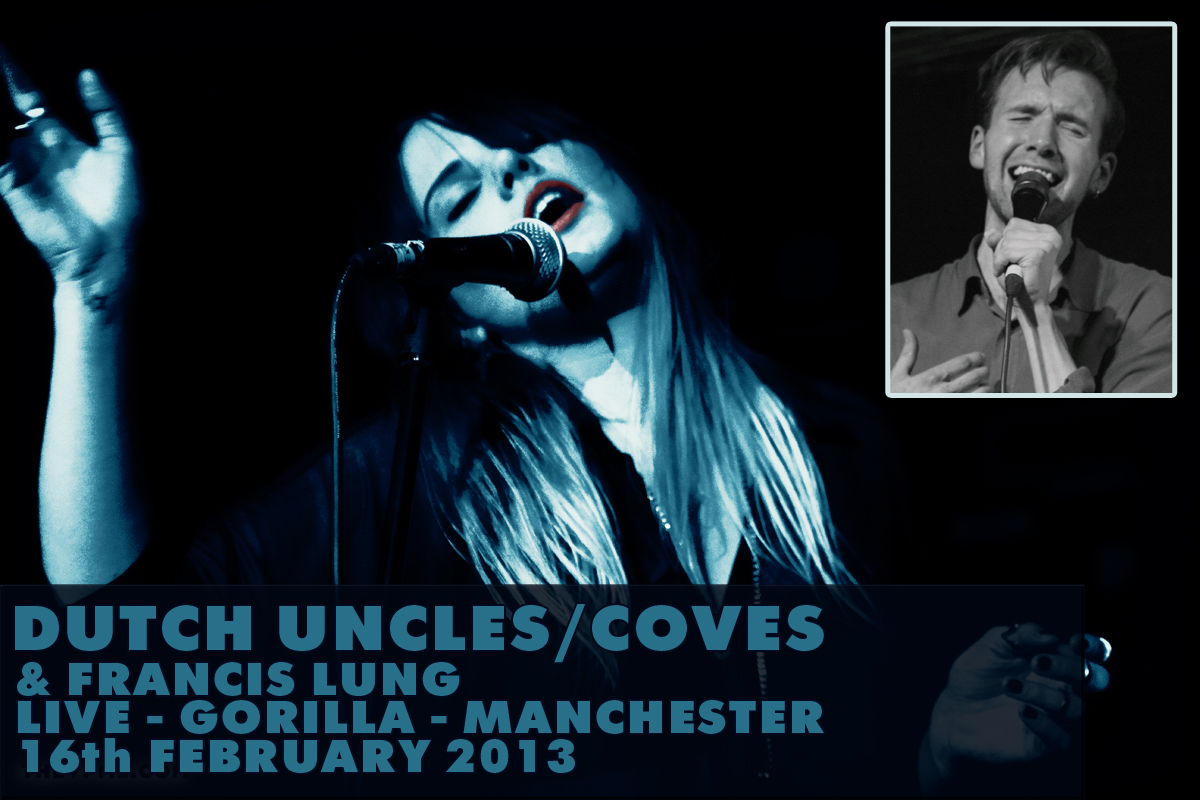 Dutch Uncles have always been a perplexing musical proposition and if we’re being completely honest, we’ve often found their redoubtable musical charms rather easy to resist in the past.  We didn’t dislike them, it was more a case that we just didn’t ‘get’ them, – it happens.  It wasn’t until the release of their latest album ‘Out Of Touch in the Wild’ that the various strands of their complicated musical spaghetti started to make some kind of sense.  And through the slightly arch, playful cleverness, we began to discern some tunes we could actually get a fix on.

Dutch Uncles play a style of music we have always found hard to embrace, for example should you overplay the quirky knowingness things can rapidly shift from enigmatically engaging to arse achingly annoying, see Everything Everything for further details.  However, people whose opinions we value informed us that to really appreciate Dutch Uncles they should be experienced live.  Thus, we resolved to do just that when the next opportunity arose.  Of course, when we discovered Coves, our current musical objet de notre affection were also on the bill we shot up the M53 with more haste than Eric Pickles armed with a 12″plate upon hearing the words “The free buffet is now open.“ 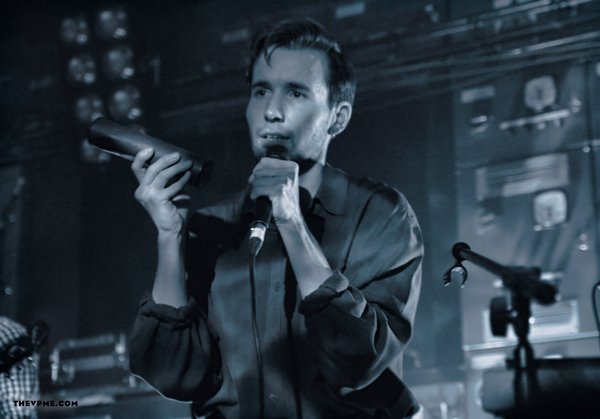 Dutch Uncles arrived on stage to a hero’s welcome at one of Manchester’s newest and most impressive venue’s, ‘Gorilla’ and treated their fans to a remarkable musical smorgasbord serving up a set that was shot through with energy, pace, musical craftsmanship, some witty banter and yet…..  somehow…..  we remained emotionally detached. Each song no matter how technically dazzling, how well sung or how beautifully performed lacked the one thing we require above all else from music, the ability to move us.  This of course did not seem to be an issue for the majority of the the audience who were here to party and who enthusiastically attempted, with varying degrees of success, to throw the same shapes as Dutch Uncle front man Duncan Wallis.  Duncan is undoubtedly a charismatic young chap, with the merest hint of the Rob Brydons about him, but he is also a man directly responsible for a fan base that seems rather too willing to indulge in shameful and deeply unnerving public displays of sans ironic ‘jazz hands’ at the drop of a hat ;) .  The band powered through  crowd pleasers such as ‘Pondage’ ‘Flexxin’  ‘Cadenza’ and ‘Fester’ and at one point performed their own version of ‘duelling banjos’ but with Xylophones.  They closed the night in typically oddball fashion with a quite remarkable version of ‘Slave To The Rhythm’ which at times sounded like Ben Folds meets Shakatak, but which curiously worked incredibly well.  …..And maybe that’s what “Math Soul” is all about (a term coined by the band to describe their music)- technically brilliant, beautifully constructed, precision built complex multi-layered compositions, which are hugely entertaining, and yet is music to be admired rather than loved.  But maybe, y’know, that’s just fine too ;) 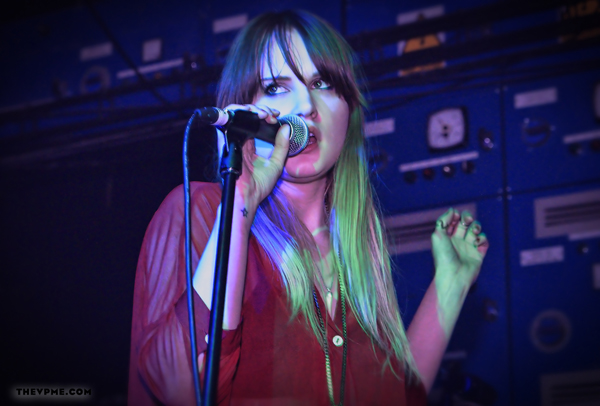 Coves on the other hand are a completely different proposition, they reached into our jaded little souls and stole our hearts pretty much the first time we heard them.  Straight away, we felt an emotional connection via their wonderful songs – who knows how these things work? How music weaves its subtle magic on you?  There’s just something about the arrangement of the words and music that resonated, as all our very favourite music does.  It possibly sounds a little pretentious to call it poetry of the soul, but that’s genuinely how we feel about the music that moves and inspires us.

This was also our first chance to catch Coves live and in person Beck Wood is as beautiful and beguiling a presence on stage as you’re likely to encounter, switching from languid sensual seductress to mystic rock n roll high priestess in a heartbeat.  Prowling around the stage her lush vocals weaved in and out of John Ridgard’s squalling dirty guitar licks underpinned by Andy Davidson’s relentless drumming.

The driving psyche tinged ‘Cast A Shadow’ is as damn near perfect a song to kick off any set and with songs as wonderful as  ‘Run With Me’, the mystical tripped out ‘No Ladder’ and the gorgeous shimmering poetic beauty of the Mary Chain meets Mazy Starr infused ‘Fall Out Of Love’ we were quickly under Coves formidable musical spell.  A slight false start on their forthcoming single ‘Last Desire’ left them joking that Andy “couldn’t be arsed to play the verse so he went straight to the chorus” – to which he responded – “dont bore us – skip to the chorus” and it mattered not a jot as it simply meant more Coves for your money.

Throw in a luminous shoegazey version of Chris Isaacs” ‘Wicked Game’ which they have totally made their own and by the time the set was over, all too quickly, we’d pretty much decided that we would crawl over broken glass to see Coves play again.  In fact, we briefly contemplated refusing to listen to any other band ever again, before deciding, that such a scenario could be problematic for a music blog ;)

A word too for former WU LYF bassist Francis Lung who was hugely impressive in that ‘awkward’ opening spot.  He seemed to appear from nowhere, a lone figure on stage illuminated by a single spotlight as the audience started to arrive.  Steadily he drew the crowd’s attention and by the end of his set he had completely won them over with a selection of heartfelt, sometimes dark, but always engaging songs.  All in all an absolutely great night of entertainment and proof positive that Britain is endowed with a huge amount of creative talent, but you won’t find it sitting on your arse on a Saturday night being spoon fed warm, fetid musical diarrhoea by Uncle Simon and his karaoke meat puppets. It’s out there in Britain’s music venues waiting to be discovered by people who give a shit and it needs your support. 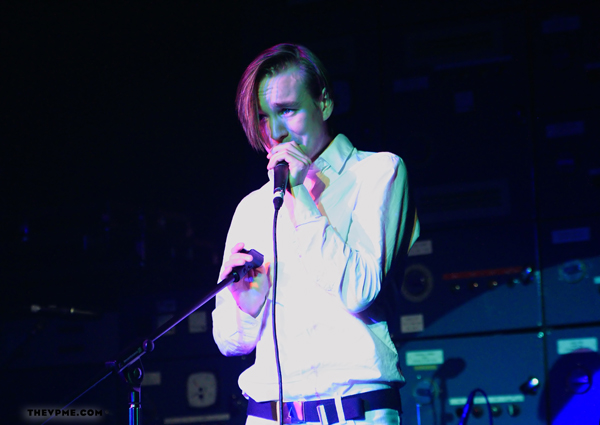