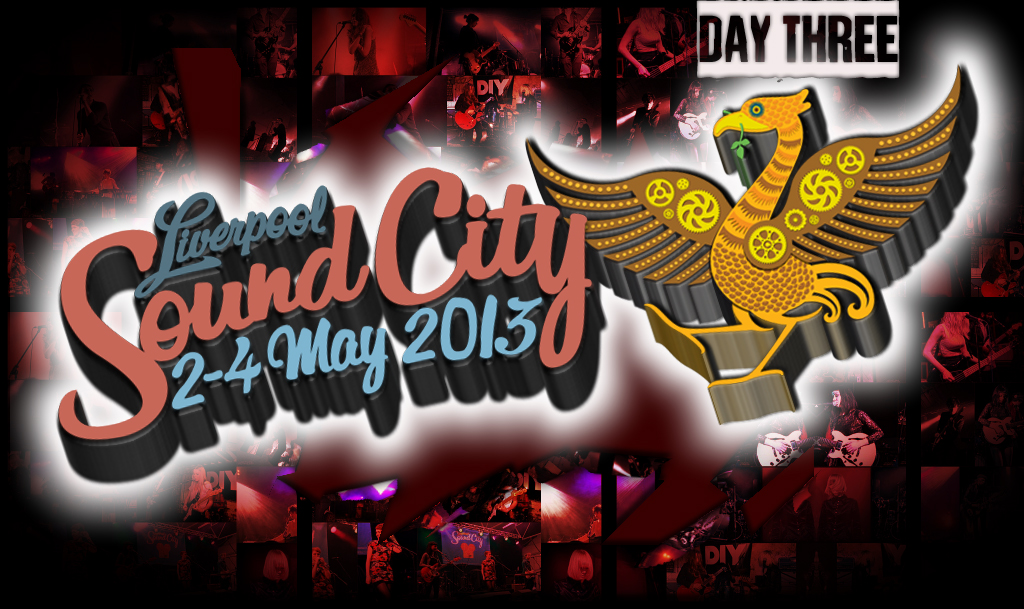 And so it came to pass that on the third day of Liverpool Sound City our hangover had swelled to Brobdingnagian proportions!  We awoke gripped by ‘the F.E.A.R.’ aka ‘hangover anxiety’, and resolved we needed something to expunge the darkness, to cleanse us like bleach.

Ironically, the first gig of the final day was from Bleech, a band we’ve been long time fans of but never managed to catch live, but whoooaa, was it worth the wait.  The trio comprising of sisters Jennifer and Katherine O’Neil with Matt Bik on drums produced one of the best performances of the entire festival.  Incendiary, raw, engaging, full of power, passion, and sounding even better live than on record.  The trio weren’t simply great, they were fucking inspirational!  Their set included a high quota of new material from their forthcoming album ‘Humble Sky’ that sounded so strong that it must surely take the band to the next level.  As the set ended, we had suddenly rediscovered the urge to drink as we mumbled ‘what…  a …fucking…  band!’  Time for the music industry to wake up.

Next, it’s to the loft at the East Village Arts Club for Dark Horses.  Now, if we were to adopt the over excitable and oft incomprehensible rhetoric of one Zane Lowe we could say that Dark Horses are “the coolest band in the world right now, individually and specifically.’  And it would be true; however looking like a cross between the Velvet Underground and characters who’ve just wandered off the set of ‘Rumblefish’ would come to naught if you didn’t have the songs and musical virtuosity to back it all up.  Thankfully, Dark Horses have it in spades.  Lisa Elle, the Dark Horses’ chanteuse has that imperious ice–queen chic down to a tee and was a swaying hypnotic presence on a stage that appeared to be lit in order to replicate the Eighth Circle of Hell.  The conflagrant red-hot glow, which was at direct odds to the bands glacial cool, was due in no small part to the accursed blight of gig photographers, the ubiquitous red LED stage lights.  This appeared to a be particular problem at the East Village Arts Club (Loft) during Sound City, yes it may be cheaper and safer but when employed with such a lack of guile, it’s about as subtle as a Jeremy Clarkson diatribe on Germans, speed limits and helping the local spastics.  In addition, such maladroit use of lighting didn’t exactly help create the dark menace and atmospheric ambiance the band often utilises to compliment their music.  But such is life, and at metropolitan festivals, with such a quick turnaround of bands there’s often barely time for artists to sound check, never mind sort out the lighting.  But that aside Dark Horses were moodily magnificent and galloped through a snap shot of one of the best albums of 2012, the quite wondrous ‘Black Music’ with some aplomb.

We head over the Garage, to catch Golden Fable, which did seem a strange choice of venue, being one of the biggest available at the  Festival.  Especially when you consider the queues across the way at the Kazimier which ranged from daunting, to ‘fuck this, whose round is it? .’ Nevertheless, the logistical challenges of putting on 360 plus bands would cause even Harvey Goldsmith to wake up in the dead of night screaming like a child.  Golden Fable were marvellous, their live sound far more majestic than we’d actually anticipated with Tim McIver performing all manner of Guthrie style magic with his guitar and pedals.  In addition, the Cocteau factor was enhanced further by Rebecca Palin’s haunting ethereal almost semi operatic vocals, which transformed an old NCP Garage into something quite magical.

Admittedly we are flagging at this point but decided to wait up for Big Deal, because, well…. we rather the like them.  It transpired to be a wise move as their set proved the perfect end to our Sound City 2013.  The boy/girl vocal harmonies of Kacey Underwood and Alice Costelloe have always been compelling, producing songs that whilst sounding anatomically sparse, were always imbued with great emotional depth and caustic wit.  However, last year’s single ‘ Teradactol’ served notice that they had ramped up their sound to Warp factor five with thunderous riffs, grungy guitar effects and live they sounded glorious.  The songs retained the ability to sound intimate and personal but this new sonic, almost shoegazy dimension took them to another place.  Big Deal are now a melodic soaring aural juggernaut and even wearing Mickey Mouse sweatshirts somehow contrive to look as cool as fuck.

And there you have it, Sound City 2013, three days of some of the best new music you could wish for with a huge range of genres hosted in a City that doesn’t view art and culture as a luxury or an occasional distraction but as the oxygen of life.  Boss laaa!