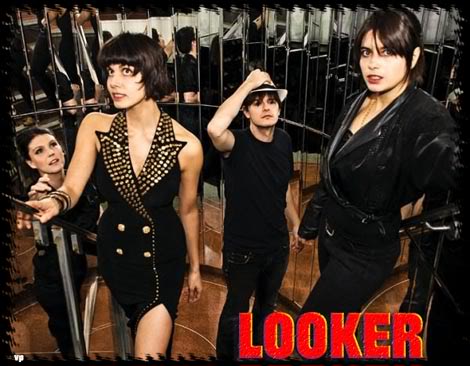 “Gates To The Old City” by Looker

“So this is Shoreditch? Kinda like New York, ten years ago – before it sucked.” So says Looker guitarist and vocalist Nicole Greco in the middle of their storming set at the Old Blue Last, one the most ‘Shoreditch’ venues around (east london fashionistas/poseurs aplenty). This is a band with a real love for the UK and its musical heritage (the Kinks and the Beatles in particular) and judging by tonight’s performance the feeling is mutual.

Looker are pure New York- plenty of attitude yet hugely likeable. This is the band you would have wanted to see in the (now closed) legendary grimy NY venue CBGBs. They’re punky, they look great, they wear their guitars low and like their musical godfathers the Ramones have a huge affection for 60s girl groups like the Shangri Las. It’s hardly an original mix of sounds but this exciting young quartet are doing so much better than the rest. They wear their influences on their sleeves (you can add Blondie, The Pretenders and the Clash to that list) but come out with their own fresh and intoxicating concoction. Some pleasingly askew song structures and intriguing lyrics help them stand out from the crowd.

glorious should-be-hits like ‘Gates to the Old City’– the triple attack female vocals and spangly guitars powered along by drummer Robbie Overbey’s furious pace. It’s always nice to see a band still playing like a bunch of friends having a blast in the garage.

They finish by giving thanks to a couple who have been following them round all their UK shows. I imagine Looker will soon be inspiring such devotion in many more fans. Looks like the start of a beautiful love affair.