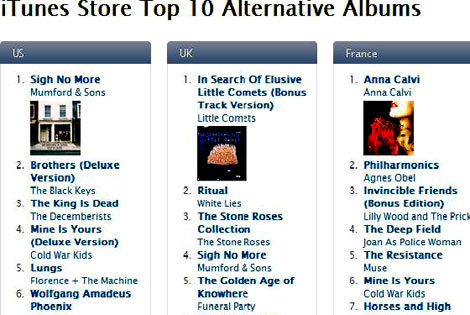 It appears that many music fans view big record labels as inherently evil, that they essentially steal money, intellectual property and artistic ambition from musicians by way of their own version of the ‘dementor’s kiss’ – the record deal!!  Of course it’s not my place to comment on such scandalous allegations ;) however, Newcastle four piece, Little Comets didn’t exactly enjoy the experience of being signed to a major label.  In fact they ended up in such a wrangle that their much delayed début album ‘In Search Of The Elusive Little Comets’ had to be prised finger by finger from Colombia Records vice like grip.  The band have since described the whole big label experience as ‘deflating’.  Colombia’s attempts to absorb the lads into the faceless machinery of a Kafkaesque system left them both baffled and frustrated. Any concerns were apparently patronised with ‘that’s not how it works’ or simply fobbed off with, ‘trust us, we know what we’re doing.’ Little Comets you see made the fatal mistake of having the audacity to have an opinion on their own music and this outrageous behaviour eventually led to a rather acrimonious spilt from Colombia, who then refused to give the band their album back!  However the label finally relented ‘after deciding that it didn’t sound enough like Ke$ha” and the Little Comets reclaimed what was rightfully theirs.

Listening to the album, you can’t help but agree with Van Morrison when he said “You can bet 99.5% of the record business knows nothing about music.” I mean really, what were Columbia thinking?? ‘In Search Of The Elusive Little Comets’ manages to combine erudite lyrics with breathless upbeat melodies and is an album positively brimming with ideas. The album starts with the morality tale that is ‘Adultery’ – ‘The signs of cavorting/Still cling to his clothes/Tension mounts/He tells her that platonic love never counts,’ there’s the brilliant gritty kitchen sink tale of domestic violence told via  ‘Her Two Black Eyes’- a world ‘where tension and silence/Can merge into violence’ and the bleak angular Albarnesque Brit Pop of ‘Isles’ (replete with a wonderful cinematic video that would do Shane Meadows proud.) Don’t be put off  by some of the seemingly  weighty themes contained within because the overall effect of the album is actually surprisingly uplifting. Like Edwyn Collins and Orange Juice, Little Comets deftly combine intelligence with danceable guitar driven melodies, creating an album that is genuinely inspiring.

Robert Coles’ vocal technique may at times be something of an acquired taste and occasionally he may veer towards a male version of  Marina Diamandis/Lene Lovitch yodeling at a Futureheads gig, yet somehow this  adds to Little Comets very British charm and appeal.  The album’s closing track ‘Intelligent Animals’ is something of a revelation, a piano led lament that in Chris Martin’s hands would no doubt  come across as preachy and hollow but Little Comets produce a song that really is profoundly effecting.

If Columbia executives chance across the I-tunes alternative download charts (above) they may well be ruing their decision to let Little Comets go, still, I suppose they can continue to keep putting their faith in contrived  singers who wear placentas around their neck and sing about the square root of fuck-all.

We had a word with Robert about big labels, stalkers and house parties in Liverpool.

VP:  How do, how are you?  So your semi mythical debut album ‘In Search of Elusive Little Comets, is finally out. I say semi mythical as it looked at one stage as if the album would never see the light of day, what happened! And Is the title somewhat ironic?

ROBERT:  Hello! We’re good thanks. Just finished rehearsing so full of sweat and ringing ears…. Yes, we’re glad that the album is finally coming out: it’s been quite an arduous road at times but I think because we managed to produce the album itself, the sense of musical ownership that we have over it has meant that we’d always pursue having it released.  The title is a fortunate accident…. during an afternoon of typing-little-comets-into-google we came across an article from a scientist who postulated that the oceans of earth were populated by the vapour of millions of tiny ice balls careering through the earth’s atmosphere every day, but totally invisible to radar. It was called ‘In Search of Elusive Little Comets’, but we thought it would make a nice name for an album.

VP:   I’d imagine getting the album out under your own steam, getting radio play and support from the likes of six music was pretty satisfying and a vindication of sorts.

ROBERT:  That was lovely. We really respect DJs like Tom Robinson, Huw Stephens, Steve Lamacq and Zane Lowe who have real commitment to discovering new music and so the first time Isles was played on the radio we were very proud, especially without the power of a major label to force people to play the music. Since leaving Columbia we’ve felt like a band just starting out again, but determined to enjoy ourselves and not to take anything for granted.

VP:     So what lessons did you learn from your big label experience?

ROBERT:   Hahaha, we seem to be accidently stepping on the toes of the next question all the time….. erm…. I think major labels can be very positive for a certain type of band, definitely one in an embryonic stage, but we had very strong intentions to do everything ourselves, from production to artwork. We certainly entered into the relationship with a great deal of naivety in expecting to be able to do this, but I also think the label failed to understand that this was a key part of our identity. Also, we should have rinsed them up a bit more, and pimped our van out with a jacuzzi.

VP: You self produced the album, is this due to the fact that you wanted to produce something that was a true representation of the band, not someone else’s vision and  not sullied by  having , say, having a Mark Ronson style guru throwing in trademark ‘honking horn’s all over the shop ?

ROBERT:   Yes, I think a combination of that and our song-writing process. It is very rare that we’ll play a song live without having recorded it first as that’s when it really takes shape. Consequently we won’t demo songs, we’ll record them properly and so the first version of a song tends to be a final version… I think another problem was that we couldn’t agree with the label on who should produce the album. We had a list of producers and engineers whose work we really admired, but that just weren’t compatible with their ideas of how the album should sound… the compromise was that we would record the album with Daniel Rejmer (an engineer who Mickey really respects), whilst they would source a mixer.

VP:    What’s the scene like in Newcastle, I believe you started off doing your own club nights, and put on gigs in unusual settings?

ROBERT:  It’s really good at the minute, bands like Frankie and Heartstrings and Grandfather Birds are creating some lovely music which is great for aspiring musicians in the region…. it’s nice to have a community of bands in the area that we get along well with and enjoy listening to and playing with. I suppose that’s why we started putting on our own nights, so we could choose the bands we played with… the unusual setting gigs were Mickey’s ideas: he wanted us to play to a captive audience, so he cajoled us onto metros, trains, trams and into lecture theatres and supermarkets to do little performances.

ROBERT:   Hmmm worst gig was probably a house party in Liverpool where 5 people turned up, but we still played – it was our version of sadism. My favourite gig was probably in Norwich last October: we’d had a lot of fun playing with Darwin Deez and the crowd were lovely – they were quiet and then loud at the appropriate times, the venue had lovely acoustics and we got a nice veggie stew beforehand and had a travelodge party afterwards. It was snazzy.

VP: Isn’t the social networking side of things almost a full time job for bands these days. Some fans seem to expect access all areas these days, which can be nice but the flip side is you could one day attract a fan like Annie Wilkes in ‘Misery ‘ y’now- ‘God came to me last night and told me your purpose for being  here. I am going to help you write a new album- I’m your number one fan.’ How do you deal with this side of things?

ROBERT:   Erm…. I don’t know. I suppose we all do a little bit and try to reply to every message we get sent… we don’t have too many crazy fans although we all do have a designated stalker: two from Scotland, one from Sunderland and one from Huddersfield.

ROBERT:  Hopefully: Mickey will finish his house which lacks central heating and a kitchen; Mark wants to consummate his marriage; Matt wants to get a store card for Vivienne Westwood and I’d like to really learn how to garden. As a band we’d like to play some nice festivals and sell enough albums to be able to make another one…

ROBERT:  Just one will do: Booooootler.