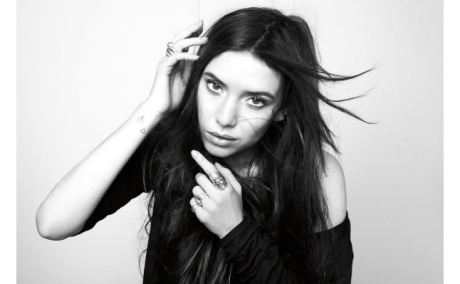 February 28th sees the release of ‘Wounded Rhymes,’ the second album, (or snigger, the sophomore album if you’re a pretentious arse) from Lykke Li. It’s an album that certainly looks set to turn her into a BIG star. But not a pop star, heavens no, please don’t call her that , lest you prepare yourself for a tongue lashing, and be warned she doesn’t mince her words -‘ pop music has this negative, fake and disgusting image. And that is something I don’t want to be a part of. When people label me pop, I want to puke.’ Yet in essence ‘Wounded Rhymes‘ is a pop album, but one that’s bursting with such originality, subtle sophistication and restless creativity that to label it ‘pop’ in the ‘Pop Justice‘ sense of the word, would actually be an injustice!

‘Wounded Rhymes’ is an eclectic a mix of cascading tribal beats, wonky, skittering keyboards and haunting vocals that range from the strident to the sultry. It’s always innovative, entertaining, sexy and at times downright eccentric. It’s an album that delves into the feelings experienced in the aftermath of loss and it is undoubtedly a dark, melancholic slice of pop noir, yet it never feels bleak, in fact the overall impression one is left with, is that of a singer who has become emboldened by experience and one who has found her true voice. It’s an album that works on many different levels and on occasion sounds like a twisted version of the Ronettes drowning in black honey..or maybe Marmite, because I get the feeling Ms Li could be an artist that may well divide music fans. As for me, well I definitely Lykke and that’s no Li (e)! (oh dear and I’d done so well to avoid clunking puns)

The whole album is streaming over at the Hype Machine