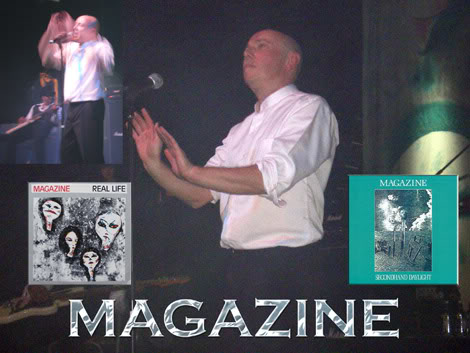 “Shot By Both Sides“By Magazine

Nobody was probably more surprised by the mad clamour for tickets for this reunion than the band themselves. What initially started out as a 2 date comeback, one in London, one in Manchester, had to be expanded to a 6 date “tour” of sorts to satisfy the demand. When Magazine first faded away after the ghastly damp squib of their final LP Magic Murder & The Weather, they were regarded as a significant but still highly cultish act, known mainly to a hardcore of devotees. Over recent years their reputation, like that of other angular “post punk” bands like Wire, has grown massively due to the increasing dropping of the name, and their obvious influence on bands like Franz Ferdinand and Radiohead, and so tonight’s audience in a packed Forum is not just, well, middle aged old buggers from first time round like myself, but has a healthy smattering of what we like to call “the young people”. Pesky and annoying as the over-enthusiastic teenager can be, it’s better that they’re here for bands like Magazine than fodder like White Lies et al.

By way of a curtain raiser (quite literally, as a large black cloth conceals the

rear half of the stage!) we get a very short set from Ipso Facto whose front line sport almost identical Louise Brooks shiny jet black bob haircuts and matching black dresses. They seem to be going for the aloof, contemptuous “you feeble man, I could crush you with one good blow from my spiky heels” attitude, but the “hello, we’re Ipso Facto” and the polite requests that we buy their single from the merch stall kind of puts the kibosh on that one! They seem like very nice girls who are very slightly over-awed at playing to a somewhat larger audience than they’re used to. Their music is actually pretty good in a leftfield girlie indie pop kinda style, the highlights being “Eyes And Ears” and a rather sweet cover of “You Don’t Own Me” which I am somewhat taken aback to learn is lifted from the Dirty Dancing soundtrack!

After much faffing about of roadies from behind the aforementioned black curtain, the recorded version of Magazine’s instrumental The Thin Air booms out over the PA and is followed by a bizarre spoken word intro from an unseen Howard Devoto. Often criticized as a cold, detached, intellectual egghead, (Pete Shelley’s priceless description of him: “Howard? Oh Howard’s as mad as a brush”) he is in fact possessed of a wry if bizarre sense of fun, and after some spiel about how Dave Formula instigated this comeback, he reveals he is doing it personally “because there’s this woman I want to impress”. Cue laughter in the crowd. The laughing stops pretty much straight off as the curtain falls away revealing a massive backdrop of the hideous leering faces from the Real Life sleeve, and the band launch straight into The Light Pours Out Of Me. Time seems to have been quite kind to the older members of the band, particularly Barry Adamson for whom, clad in Cuban heels, black jeans, waistcoat and fob, top hat and shades, the words “cool” and “dude” appear to have been invented. Devoto, looking a good deal healthier (and several pounds heavier!) than the gaunt angular stick insect of yore, strolls on wearing a get up that only serves to confirm his status as one of the Great British rock n roll eccentrics: Chinese style cut-off pants and soft cotton slippers, a white shirt and a truly ghastly pale salmon pink jacket. But once he starts singing, quite frankly we don’t care if he’s wearing one of Ipso Facto’s black cocktail frocks because it is one hell of a special moment. It’s perfect, and the ovation that greets the song’s end is one of the most prolonged I’ve ever heard for an opening number.

The set that unfolds draws mainly on their two most highly regarded albums, 1978’s Real Life, and their most critically regarded The Correct Use Of Soap, pretty much two thirds of each of them getting an airing. Not counting The Thin Air as tonight’s recorded intro music, their majestic 2nd LP Secondhand Daylight sadly only gets raided for two numbers, but at least they choose wisely, a menacing and brooding Permafrost, and a terrific jagged Rhythm Of Cruelty, which is touchingly dedicated to their late great guitarist John McGeoch, whose stand-in tonight, Noko, does an excellent job of recreating McGeoch’s unique spiraling sound. His scarlet velvet suit and matching pointy boots however are perhaps not so inspired.

There are only a couple of minor quibbles: the sound mix is occasionally a bit muddy and loses some of the layers of Dave Formula’s keyboards, they make a complete dog’s breakfast of The Great Beautician In The Sky, and for the first half of You Never Knew Me, Devoto seems to be drifting about in an entirely different key to the rest of the band. But when they hit form, such criticisms are rendered pointless when you feel the hairs on your neck stand on end. The main set ends, as we inevitably know it must, with the adrenaline surge of a truly chaotic Shot By Both Sides. Cue middle aged punkers leaping up and down in the moshpit with wild reckless abandon and scant regard for the risk of cardiac arrest… Even wilder is the pogo-a-gogo frenzy of the final encore thrash through I Love You, You Big Dummy.

And that’s it: standing ovations, beaming smiles, and group hugs all round. Like all such reunions, there’s always a risk that your heroes are going to tarnish their good name, but to their credit Magazine only served to enhance their reputation as an innovative and unique force of the British New Wave. And you can’t really ask for much more than that can you?

Words and Photos :
Richard the Goth