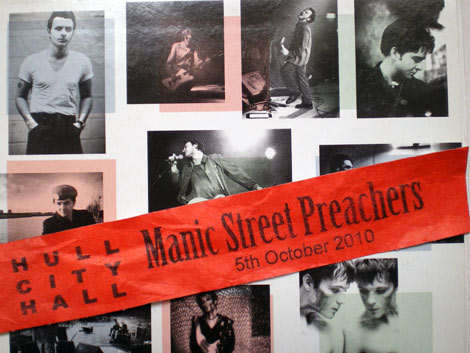 Our very own prince of darkness, Richard The Goth, dons his cape and clambers aboard his hanson carriage to  report on…
MANIC STREET PREACHERS : HULL CITY HALL : OCTOBER 5th 2010

“Little Baby Nothing” By The Manic Street Preachers.
[soundcloud url=”http://api.soundcloud.com/tracks/1873850?secret_token=s-44qpG”]

It’s a risky business, declaring yourself a rock n roll iconoclast, making rash pronouncements about blazing a brief dazzling trail and then burning out while young and beautiful etc. If you then find yourself with a lucrative career and adoring punters, what do you do? Brazen it out, try to blag your way out of it with qualifying statements about your contrary capriciousness, how it was “all part of the masterplan, honest, guv’nor”, or do you keep your head down and take the inevitable brickbats as your youthful folly comes back to bite you on the bum?  Being one of the worst offendors in the past, the Manics know this scenario only too well. To some extent, they still compound the problem, as gob-on-a-stick Nicky Wire continues to castigate other bands who don’t really “mean it”, yet he somehow seems unwilling to cast a critical eye closer to home! Apparently, changing and dropping lyrics that don’t suit them anymore causes him to bat not an eyelid.
That said, what of tonight’s show? Well, the City Hall has seen the great, the good and the wretched perform under its ornate balconies over the years, yet the acoustics have never been particularly special.  Openers British Sea Power suffer most from this, seeming subdued, although they do manage a pretty decent “No Lucifer”.
When the Manics stroll on, first thing that hits you is that they appear to have hired a Richie-a-Like on second guitar: young, thin, black floppy haircut, grey t shirt/dog tags… spooky!  The second thing is what a nice upmarket stage show they can afford nowadays: scarlet satin curtain, glittery mannequins all over the shop, flashing sequenced strobes… crikey! “we destroy rock n roll” eh boys? heh heh heh.
The set itself is a career-spanning trawl, the highlights a punchy “Kevin Carter“, a spiky take of “Faster” and a blitz through their finest moment “Motown Junk”, preceded by a simple yet touching dedication of “this song is for Mr Richard James Edwards“. The neutering of the shocking line “I laughed when Lennon got shot” is still a total cop-out and brings me back to my point about Nicky Wire… people in glass houses ‘n’ all that…
The trouble with the Manics is that the lowlights have always greatly outnumbered the highs; the bombastic overwrought guitar solo sound, the plodding ordinary sub-stadium rock of large chunks of their material, and James’ unfortunate tendency to stray into sqealing piggy territory when he over-reaches his vocal range.  All here in evidence tonight.
Overall, certainly a far superior performance to their last Hull visit, a truly awful exhibition of workmanlike tedium at the Arena, but the Manics remain for me a band that is awarded a status far higher than they’ve ever actually deserved.
Words/ Photo : Richard The Goth