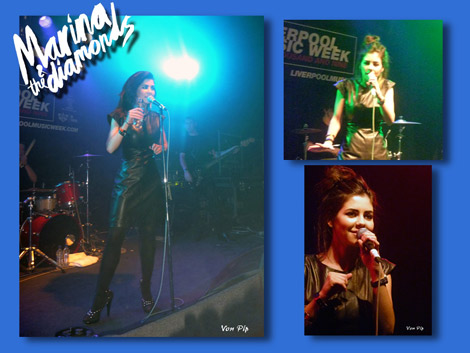 I generally get a little nervous before gigs. Excitement, anticipation and of course freshly laundered underpants all play a part in the pre gig ritual but prior to tonight’s gig I was extra jittery. I’ve been in the thrall of Marina and the Diamonds for the last 18 months or so and now finally I had the chance to catch her live, at a free gig as part of Liverpool music week. The anxiety I felt could probably be equated to the emotions a football fan must experience prior to a big game whereby you hope that your team puts in the performance you know they are capable thus affirming the faith you have in their talent. In retrospect there was absolutely no need to worry. Simply put, Marina produced the sort of life affirming set that merely served to confirm the buzz about this girl is 100% correct. I’ll say it again but if she doesn’t make it big in 2010 then I will eat my proverbial hat, dress up as Lady Ga-Ga and question the nation’s sanity.

Reviewing gigs can sometimes be a solitary affair, especially when half the city seemed to have transported itself over to the other side of town to Morrissey’s favourite venue, the Liverpool Arena in order to pay homage to popular George Formby tribute act, the Arctic Monkeys. I actually had a ticket but as soon as I heard Marina and the Diamonds were playing on the

same night it was a case of “forget the arena; I’m going to see Marina.” Funnily enough I met a couple of other fans who were at the gig solo, rendered friendless for the night by Mr Turner and his band of ragamuffins, but once you’re a “Diamond” (the term Marina uses for her fans and isn’t actually the name of her band) you’re not really alone as there is a very real shared bond and a sense of camaraderie amongst her fans. There’s a definite vibe amongst hard core “Diamonds” that you are all in this musical adventure together, that this is your girl on stage, the one you’ve seen blossom from myspace bedroom demo singer to fully fledged pop goddess … (or maybe that was the pre-gig double Jack Daniels kicking in?) Marina has often said how much her fans mean to her and some may be inclined to dismiss this as PR bullshit, full of the kind of empty sound bites we often hear from countless pop singers. However maybe the doubters would be given pause for thought had they witnessed Marina begging bouncers to allow one of her biggest fans into tonight’s venue over concerns about his age, she eventually secured his entrance by convincing said doormen with a major whopper that the young lad in question was her long lost Scouse cousin called Onslow! (His real name is Jack) Now, how many singers would go that far for one of their fans? You do get the feeling that Marina is very much the real deal.

Without wishing to cast myself in the role of Benny Hill it must be said that Marina is stunningly beautiful in the flesh and as she prowled the stage wearing killer heels and a figure hugging leather outfit the sound of young men’s knees buckling was almost palpable, whilst gentlemen of a certain vintage seemed to experience the onset of a full-on mid-life crisis!! Marina and her band had just played a sell out 1,000 capacity show in Dublin the night before so if playing a free gig in Liverpool on a wet and windy Friday night was a bit of a comedown it certainly didn’t show in terms of the effort and energy expended. Liverpool can be a strange city when it comes to gigs, it’s almost impossible to gauge which bands will draw a crowd and what sort of reception a performer will get. Tonight’s assembled crowd greeted Marina with the kind of cautious enthusiasm that says “well you’re not a Beatles tribute band so we’ll just have to just see how we get along, won’t we?” However by the time the acid tongued bouncing brilliance of the opening song “Girls” (think a literate version of a punked up Britney whose drink’s been spiked with vitriol) had finished she’d thawed even the frostiest of hearts and proceeded to produce one of the most entertaining, engaging and compelling performances I’ve seen for quite some time. Marina’s charisma, easy charm and ability to completely connect with the audience seemed so effortless and natural that you really did feel part of the show; it’s hard to believe that at one time she was petrified of performing in public.

Tonight’s set included a tune strongly rumoured to be the next single, ‘Hollywood Infected Your Brain,’ a stellar pop tune which could be the song that enables Marina to break through into the mainstream, whilst somewhat ironically it appears to be a critique of the very culture of celebrity she is on the cusp of. In many ways it encapsulates the paradox that is “Marina.” She may well tweet with the likes of salacious Hollywood rumour monger extraordinaire, Perez Hilton, on twitter, she is undoubtedly “obsessed with the mess that’s America” but “Hollywood” shows she’s also aware of the dark side of fame. She’s conscious of the fact that the limelight is also the firing line and you get a sense that should she achieve a certain level of prominence that she is acutely aware of it’s ugly destructive flip-side. Like many of us she seems fascinated and appalled by it in equal measure. But unlike many of us she has the ability to write a killer pop song on the subject!

An obvious highlight of Marina’s set is her tale of dysfunctional relationships and post-coital angst, the quite wonderful ‘Obsessions’ is a song designed to make ones heart simultaneously burst with both joy and sadness, such is the raw emotion, honesty and bitter-tinged sense of regret contained within. Further spine tingling moments included a slowed down keyboard only version of her current single ‘Mowgli’s Road,’ turning a tumultuous slice of “cuckoo-pop” into a rather sad yet beautiful lament whilst showcasing the uniqueness of her vocal style. When firm fan favourite and one of the songs of 2009, ‘I am Not A Robot’ is performed with such passion you can’t help but agree with the fan who said “this woman deserves to succeed,” because she really does. She has something new and innovative and dynamic to offer the pop world, something that she exudes herself and, unlike many pop wannabes she isn’t just going through the motions to attain success for its own sake.


The set finishes with a triumphant second version of ‘Mowgli’s Road,’ this one the full on version ….and then….. she’s gone. A ten song set which was over way too quickly, but she proved beyond a doubt she was born to do this, is a unique talent and next year will surely see her make the breakthrough she richly deserves. She gave a staggering performance, as did I, as I weaved my home into the wet Liverpudlian night, quite intoxicated in every possible sense of the word! Balls out brilliant!

I wrote this review for Altsounds.com . The original article can be viewed here