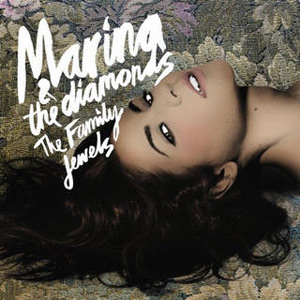 Runner up in The BBC’s Sound of 2010 poll, Marina and the Diamonds puts her money where the hype is and releases her much anticipated debut album ‘The Family Jewels’. The question is, does it cut the mustard, does it measure up, is it all that???The short answer is an unequivocal “YES!” But here’s the long version….

‘The Family Jewels’ really does exceed all expectations and heralds the arrival of an outstanding new talent, it’s an album that can be enjoyed on many different levels and should appeal right across the board from fashion conscious teens right through to middle-aged Kate Bush fans . Comparisons are of course lazy, but on this occasion seem quite justified because at times you may feel like you’re listening to Tori Amos’ street wise, sassy little sister. There are other musical reference points throughout the album, for example a discerning ear may well detect more than a hint of the vocal aerobics favoured by Regina Spector, or the theatrical, dramatic delivery of Amanda Palmer or even a pop-centric version of Siouxsie Sioux.  Despite such comparisons Marina has unleashed an album that is very different from what’s currently being produced by other artists in the sphere of ‘pop’. You have to say ‘hats off’ to Neon Gold and

679 Recordings Ltd for taking a chance on a singer many may have regarded as a little too ‘wacky’ and left field at a time when record labels rarely invest in anything that deviates from the traditional ‘safe pop’ template. ‘Family Jewels’ is a vibrant, angry, wry, joyous and at times scathingly sarcastic affair. But it also reveals a more reflective vulnerable side, as  weaved throughout the fabric of  what is, essentially a pop album , are songs imbued with an aching melancholy which display a raw honesty that is genuinely touching, no more so than on the magnificent ‘Numb’or the spine tingling ‘Rootless’. Whilst Marina may not quite be Simone De Beauvoir just yet, this is an intelligent album that tries to make sense of being a young female in 2010.  A world in which there has been a definite backslide into an ideology that seeks to enforce certain female stereotypes and sadly, a world where  raunch culture, idealised beauty and ‘hotness’ are seemingly regarded as the ultimate tools of female empowerment ( perversely often by females!). The purposefully heavily photoshopped album art work also provides an ironic nod to many of the ideas and themes that run throughout the course of the album.

The album kicks off in fine style with a new song ‘Are You Satisfied? and straight away any fears that a big label deal would somehow extinguish Marina’s fire are quickly laid to rest.  ‘Shampain’ gets a thorough reworking, replacing the slightly cheesy keyboard present on the early demos with a throbbing synth beat that snakes around Marinas vocals and turns an already good song into a pop beast. Lead single ‘Hollywood’ is probably the albums most mainstream offering and whilst it’s chart success has gleaned Marina a whole new army of fans, it’s also given credence to the theory that Marina may well be one of those artists who you either  “get” or are left wondering just what exactly all the fuss is about. Whilst ‘Hollywood’ is not Marina’s best track, it still boasts a killer chorus and is certainly more intelligent than your average chart single.  Love or hate it there’s no denying that in many ways ‘Hollywood’ is a brave pop song in terms of the subject matter. Bizarrely, it seems that a small minority of over sensitive miscreants have churlishly  misinterpreted ‘Hollywood’ as somehow being an attack on American values, however anybody with a modicum of intelligence will surely dismiss that accusation with the contempt it deserves. In reality ‘Hollywood’ addresses issues that Marina often touches on, both in her music and her blogging, such as our obsession with the emptiness of celebrity culture. Like many of us she is seduced and yet repelled by Hollywood’s plastic alternative reality, and deftly sums up her feelings as “Living in a movie scene/ Puking American dreams”

The boisterous, bouncing  ‘Girls’ w.a.g.s an accusatory musical finger at vapid female airheads who blindly follow fashions without engaging their brain and conform to a media (male) driven stereotype. However I’d question if ‘I think like a guy’ is necessarily the bench-mark of cerebral excellence? Elsewhere ‘Mowgli’s Road’ sounds as gleefully insane as ever (die-hard Diamonds will be pleased to hear that the slightly spooky clockwork intro is back) and ‘I am Not A Robot’ remains a sublime example of how intelligent, heartfelt pop should sound.

‘The Outsider’, another old favourite from Marinas early demos, could be  Kate Bush fronting the Pet Shop Boys in an alternative reality, although  you wonder if even they could come up with something this good!  One of Marinas oldest songs ‘Hermit the Frog’ which appeared on 2007’s homemade CD  ‘Mermaid versus Sailor ‘also makes the album cut, whilst another brand new tune ‘Oh No’ sees Marina warning ‘If you are not very careful/Your possessions will possess you’ and highlights her idiosyncratic, off the wall take on modern life.

It’s a great  album which has greater depth than some may associate with a genre as seemingly disposable as ‘pop’.  Strip away the pop gloss and production sparkle and there is sadness, anger, insecurity and contradiction. And maybe it’s the combination of  all these elements that make Marina stand out as a much more real, colourful and ultimately engaging  character than much of  the bland, unchallenging musical effluence that all too often clogs up the musical toilet known as ‘the charts’. ‘The Family Jewels’ proves she’s so much more than simply Kate Bush on acid.  One gripe though, no ‘This is L.A.’?   If this is the future of pop, then I’m already in my DeLorean with Marty and Doc as the futures bright, the futures Marina.- Hype? Not a chance.

this review has also been shared for publication on Altsounds.com

0 thoughts on “Marina And The Diamonds-The Family Jewels Review”