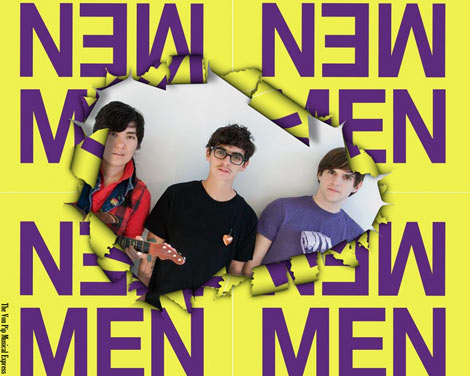 When you hear news of a musical collective whose mission is to produce music that seeks to address issues such as “wartime economics, sexual compromise and demanding liberties” you may be forgiven in this age of austerity for thinking ‘uh-oh’ this sounds like it might be a bit heavy , I’m off to take some mind bending drugs and bury my head in the sand ! ’ But such behaviour is one of many reasons why shitefests like  TV talent shows have managed to debase popular culture on a weekly basis.  We say hold your fire and keep an open mind because  JD Samson’s (of electro punk feminists Le Tigre ) latest musical project may well challenge any preconceptions you may have about a band that arrives with such a bold  statement of intent.  MEN’s début single ‘Credit Card Babies’ can be enjoyed on many levels-  but  it  could also well be  one of the most catchy and infectious dance tunes of the year, it certainly proves that entertainment can be fun and thought provoking.   True,  it’s lyrical content means it’s unlikely to be be shown too much love from day time radio.  And it’s doubtful MEN are going to be lad’s mag aficionado and all round cretin, Chris Moyles‘ favourite new band, but it’s also possibly more ‘pop’ sounding then many might of anticipated from JD and chums.

MEN was originally conceived in  2007 as a DJ/ remix  side project by JD with fellow Le Tigre  band mate Johanna Fateman.  When Johanna took some time off to have e a baby JD recruited Ginger Brooks Takahashi (LTTR) and Michael O’Neill (Ladybug Transistor) and MEN evolved into a band and art/performance cooperative that sought to showcase “the energy of live performance and radical potential of dance music” and as you might except, seek to challenge perceived societal ‘givens’.  We spoke to JD about MEN, being a role model and the future of Le Tigre.

VP: How did MEN evolve from a side project into a fully fledged band?

JD: Well I guess there was a moment when I realized I needed to kick it into gear if I wanted to work 24/7 on a project. So I asked my band mates to join me on the journey and they said yes –‘Lets do it.’

VP: What made you pick a name like MEN?

JD: It was a philosophy of living that Johanna Fateman suggested- ‘what would a man do?’ It’s about having the confidence as a woman to expect and demand what you deserve. We needed a name and it just so happened that on that day we were discussing this topic –Why can’t we be ‘MEN’? – We can be whatever we want,-  OK lets be ‘MEN’!

VP: Your debut single ‘Credit Card Babies’ certainly ticks all the boxes as a dance floor filler the lyrics seem to have confused some reviewers. What’s the actual idea behind the song?

JD: The song was written to provoke the conversation about how difficult it can be for gay people to have children. Whether it be adoption, sperm banks, or insemination, it is a decision, never an accident and never easy. I wanted to remind the rest of the world how it feels to wish you could just get the woman you love pregnant, once and the song also references some of the problems that come up when you realize that you may be bringing a child into difficult world.

VP: I’ve read that an albums pretty much been recorded, any ideas on when it may be released and can you reveal its title?

JD: Hopefully it will be out in January, fingers crossed. The name of the record is still up for discussion.

VP: Would you say MEN is more experimental than other bands you’ve all been in?

JD: I think MEN is more of a project where we aren’t really afraid., both of taking risks or of being too poppy. We just make stuff and we fall in love with it, that’s pretty much the end of it.

VP: As artists would you say that it’s still possible to shock and push boundaries? Who do you admire most in the music industry for their refusal to compromise?

JD: I love Peaches. I think she always stays true to her art and she is a real inspiration to me. She just is who she is and she fights for what she believes in. She has true confidence and I really support her in all that she does.

VP: You’ve been described as a gender provocateur; does it annoy you that some people focus on your image more than the music and the message?

JD: No I think I have put myself out there as a role model for a lot of people and made myself visible as a butch lesbian/ genderqueer and I am happy to be there for so many people. I get messages everyday about people that I have helped to come out, or helped to be who they want to be or whose minds I have opened and the truth is that I’m really happy that this was possible for the world. I love my music and a lot of people just like me for my music and don’t even know what I look like so I think its all equal in the end.

VP: Which artists past or present would you say MEN’s music has been particularly influenced by ?

VP: Will Le Tigre be back ?

JD:  Gay shredding at the club