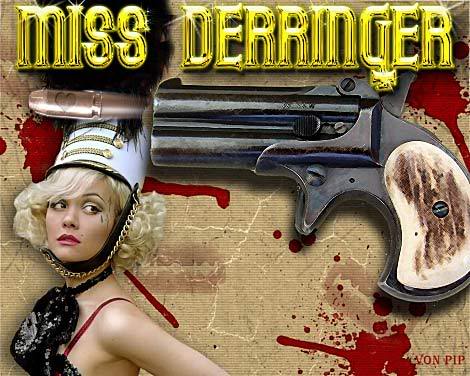 When you come across a band like Miss Derringer comparisons are inevitable. But worry not, for that’s not always a bad thing, especially if you’re being to compared to the likes of legendary female fronted groups such as Blondie, the Ronettes and the Shangri-Las.  Miss Derringer don’t contrive to hide their musical influences, quite the opposite,  they wholeheartedly embrace them but their skill and genuine appreciation of the artists that inform their sound ensures that their music never sounds contrived or manufactured; in fact they take these influences and forge them into something rather beautiful and timeless on the sacred anvil of pop. Miss Derringer manage to splice that classic girl group sound with their own atmospheric take on a kind of “Goth and Western”. Add to the mix, a feisty new wave attitude combined with a Dresden Dolls sense of theatre and the results are pristine pop songs which have a joyous simple purity and are laced with darkly gothic themes such as death, love, death, redemption, death, heartbreak plus a bit more death.  Imagine if you will, the works of Tennessee Williams as seen through Tim Burton’s eyes set to music …or something….

If you are excited by any or all of the above then Miss Derringer’s latest album “Winter Hill”, which at times sounds like Debbie Harry having a shoot out with Phil Spector  on the set of  “Westworld”, may well engulf your heart with joy and fill your dissolute soul with wonder.

Miss Derringer are fronted by the incredibly beautiful Liz McGrath, who bears more than a passing resemblance to Debbie Harry in her pomp and whose dress sense makes Gwen Stefani look like my Aunt Maude. Liz must be pretty adept at multi-tasking as she combines fronting Miss Derringer with a successful career as an underground artist and sculptor ( I have, rather disappointingly, been informed that “underground” in this sense doesn’t mean she inhabits  some sort of subterranean art studio) and you can check out some of her amazing creations here . Where as Blondie donned T-shirts and badges to defiantly claim “Blondie is a band”, things are a little bit more complicated here. “Miss Derringer” is indeed a band but it’s also the name of the character whom the band channel their sound through, a gun toting femme fatale who invariably resides “on the wrong side of love and the law.” McGrath plays the part to a tee and her glamorous stage personae and Blondie-esque vocals are certainly the bands focal point but let us not forget the rest of the group, all fine musicians with a dress sense that resembles some sort of western, zombie, gothic militia. They look like they may have just wandered off the film set of a dark, dystopian futuristic movie, but it is they who are responsible for creating the environment for “Miss Derringer” to weave her magic.  Within their number is Liz’s husband, guitarist and principle songwriter Morgan Slade who is also a highly respected photographer. Such is the artistic talent that must reside within the walls of “Chez McGrath/Slade” that if they one day have children the very fabric of time could be torn asunder and they may well grow up possessing some sort of artistic “superpower”, possibly painting the future ala  Issac Mendez in“Heroes” …I’m sure the “The Company” are watching :)

We loved “Winter Hill” so much that we rushed off to chat to Morgan and Liz, but what with the global economic downturn we couldn’t quite afford the flight to LA. We finally settled on a more frugal medium of communication and were able to take solace in bragging about reducing our carbon footprint, a bit like Bono, sans hypocrisy.

VP:  You’ve been together since 2004, in that time you’ve released three albums and had a number of line up changes, how did the band come about and what was the original idea behind “Miss Derringer”

Morgan: The band came about when I met Liz several years ago at a going away party she was having. She was actually going to the EU for the first time, and she knew my room mate at the time. We met and hit it off, and started dating. I played her a song that I had been working out for a while, and she liked it. We decided to make a few more songs, and had the idea that Miss Derringer would be a lady always on the wrong side of the law and on the wrong side of love. The idea kinda grew from there.

VP: You’ve just released “Winter Hill”, how would you describe the album and how can U.K. Fans get hold of it?

Morgan: The album is loosely based on this early ’60s Boston Irish mob war, where two rival gangs (one the Winter Hill gang) went to war over a woman. The record is faster and more produced than our other records, I feel like this is finally the record where we sound the most like how we always thought we should. UK fans (if they’re out there!) can get a hold of it through Amazon, Itunes, and other online stores. Also, you can ask for it at your local record store. (Do you have those in the UK still? we hardly have any here!)

VP:  Which sort of music/artists has had the biggest influence on your sound?

Morgan: We love music from a lot of different decades, but we are heavily influenced by early country like Johnny Cash and Hank Williams I, and we love the Girl Groups of the Brill building era – the Shangri Las, Ronnettes etc. We also find a lot of influence from new wave and punk bands like Blondie and the Misfits.

VP:   There’s no denying you’re a visually striking band -who comes up with the ideas for you image/ stage outfits?

Morgan: Liz is a visual artist and has a great eye for design and style. She also has some great fashion designer friends, Adele Mildred, Winter Rosebudd and more who make her costumes for her which is great. The look kind of evolved from the sound and vice versa…

VP:   With Liz being an artist and Morgan a photographer is there ever any conflict over how to fit everything in? Or does music and the band always take precedence

Liz: It’s definitely hard to make time for everything! The two have been relatively separate but they are starting to blend more. Right now we are both focusing on music and promoting the new record.

VP:  Liz, as an artist (described as “having an eye for beauty in the grotesquery’s of life” ) do you see it as your job to challenge peoples preconceptions , should anything be taboo in the world of art ?

Liz: I don’t know if I take it on as a job to do that necessarily, but I do think that things are more interesting when they challenging my preconceptions. I don’t think anything should be taboo, as long as it’s done responsibly.

VP:  Morgan, in terms of lyrics what sort of things inspire you to write and what would say are the underlying themes running through “Winter Hill”

Morgan: The underlying themes of most of Miss Derringer are usually related to the “darker” sides of daily life – lost love, death, murder, and suicide. You know, happy fun stuff!!!!

VP:  What have been your highlights as a band thus far?

Liz: We’ve had the good fortune to have a lot of fun and have some great experiences. We have toured with some of our favourites, Blondie, Bad Religion and others. We have met some amazing bands and toured with great people like Girl in a Coma (who are amazing and sweet and awesome.) And we have had the awesome experience of playing with bands that have really made us step it up by being so great live -like one of our favourites IAMX.

VP: Any chance of you coming over to England for a nice cup of tea, a scone and maybe even some gigs in the near future?

Morgan: We really hope so! We have been wanting to come over there for quite some time! We hope to come to Europe and tour with IAMX in March, but we’ll see…

VP:  Give us five songs that never fail to make your world a better place…