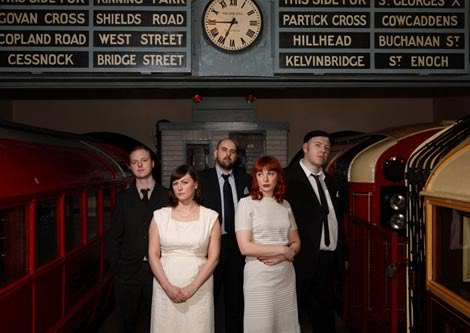 Camera Obscura announce a new single, the forthcoming album release of My Maudlin Career (out on April 20th 2009 on the legendary 4AD label) and tour dates in both the UK and US. They are also making the title track available to download.

Prior to releasing the album, comes the single, ‘French Navy’, out a week before the album on April 13th. You won’t have to wait until then to hear new music though as the new album’s title track is available to hear on both the band’s website and MySpace page now. It is also being gifted as a free download for those who sign up to the band’s new mailing list and from iTunes.

(Tickets on sale from 10th Feb at 9am from here)

Read an interview with the band here

Howling Bells are back with a vengeance in 2009. After a two year absence following the release of their elegantly haunting debut album, spent recording and touring with the likes of the Killers and Mercury Rev, the quartet of Juanita Stein, Joel Stein, Brendan Picchio and Glenn Moule are ready to unleash their singular charms on the world all over again with their brand new album “Radio Wars” and their beautiful second single “Cities Burning Down” 23/02/2009.

“I tremble”, Emily Haines whispers, at the start of Metric’s new single “Help I’m Alive”. “They’re gonna eat me alive”, she sings, just before an onslaught of beats, bass and guitar abruptly kick in and, well, swallow her whole. It’s a thrilling start to a thrilling song, roughly three and a half minutes of the most exciting, joyriding, schizoid pop you’re likely to hear all year, and a fitting return to the musical landscape for Metric.

“Help I’m Alive” is currently available for fans to purchase online as a digital download.

The Maccabees have made the first track from their new album available to download for free.

“No Kind Words” is available to download as an mp3 with artwork from www.themaccabees.co.uk now

The rather ace La Roux release “In For The Kill” on 16 March 2009 through Polydor.The video features Elly driving a very fast car through THE FUTURE. La Roux is about to tour with Lily Allen in March 09

The single is the lead song to the film of the same name (released in UK in April) featuring Dougray Scott (Desperate Housewives, Mission Impossible) and features the film’s director fellow Scot Richard Jobson (the Skids) on vocals. The single received it’s first UK play on Lauren Laverne’s BBC 6 show this weekend.

“New Town Killers” is expected to be a huge UK hit this Spring and is along the same theme as Trainspotting and Shallow Grave. The Film is premiered at The Glasgow Film festival on Mon Feb 16th at 8.30pm. The plot

centers around two private bankers, Alistair and Jamie, who have the world at their feet get their kicks from playing a 12 hour game of hunt, hide and seek with people from the margins of society. Their next target is Sean Macdonald a parentless teenager who lives with his sister on a housing estate on the outskirts of Edinburgh. She’s in debt, he’s going nowhere fast. Sean agrees to play for cash. He soon realises he’s walked into twelve hours of hell where survival is the name of the game…

Isa and Martin Metcalfe (Goodbye Mr McKenzie) lead the band and they are already getting rave reviews for their dark underground sound. There’s little doubt that the guys in this band (The Filthy Tongues) have spent years in dark places brewing up this smouldering batch of bitter edged, poison tinged, sonic assaults. As the heart of Angelfish they seemed to be on the brink of success when their singer, Shirley Manson, fell for the seduction of Butch Vig and his big dollar and left them to become the ‘token’ front-person of Garbage. But they kept at it, creating shimmering musical landscapes, until along came Stacey Chavis from Portland, Oregon to assume the role of Isa and provide the kind of cool, charismatic, rock ‘n’ roll grit ‘n’ spit vocals that have enabled them, together, to produce one tough mother of a record.

Joan As Police Woman
“START OF MY HEART”
A free audio / visual musical gift for Valentines day from one of America’s most acclaimed artists.
**** Uncut Album of The Year Award Nominee
**** Q Magazine Album of The Year Nominee
**** The Sunday Times  **** The Independent
**** Metro ***** Mail on Sunday  8/10 NME

Download the track from her much parised new album free
http://www.xtaster.co.uk/assets/joanaspolicewoman/

Joan has also made a video for the track which you can view here:

The  new album “TO SURVIVE” is out now,  including “START OF MY HEART”, “HOLIDAY” and “TO AMERICA” buy it here.

The  excellent Joy Formidable, who will be supporting Howling Bells very soon,  have released their album for free here