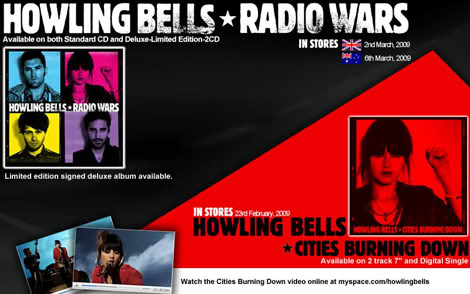 No Kind Words Is Still Available as a free download here

Cambridge band Isaac’s Aircraft release their new EP, Friends & Foes, on April 6th via Crash Records.
It’ll be available physically from HMV, and all good record stores across the county, as well as digitally via iTunes, Napster, Amazon and all other major download sites.

They’ll be performing at the following venues to the support the release:
Fri 27 Feb – Neale Wade Community College, Cambridge


The rather amazing Alessi’s Ark  has a Free Mp3 for you  ‘Magic Weather’ available now – HERE
Alessi is also currently out on tour with Mumford & Sons. Remaining dates of your below

“You Got To Tell Me” By Modern Clichés

Modern Clichés release ‘You Got To Tell Me / The Same Place’ on April 13th via Crash Records.

Established in 2006, having won a ‘Battle-of-the-Bands’ at Oxford’s Zodiac Club to play Reading Festival, still shy of 18, Modern Clichés have gigged heavily on the London scene and beyond, learning their craft and holding their own alongside acts such as Reverend and The Makers, Joe Lean and The Jing Jang Jong, and Scroobius Pip, among others.

After recording demos at Prism Studios with producer Sadegh Hakimi at the end of 2007, the band were signed to indie label Crash Records, who released the demo EP Falseness & Fairytales for digital download in September 2008. While reviews were positive, there was a general consensus that the EP, while well performed and produced, failed to capture the energy and rawness of their live sound, which began to win great acclaim, among fans and critics alike, as the band endured a hectic gigging schedule to promote the release. They played packed out venues in London, including headlining at the Dublin Castle, the Hope and Anchor, and Storm in Leicester Square, and marked their debut release with a headline slot at Oxford’s Carling Academy.

Towards the end of 2008 the band turned their attention to their next release, with new tracks, as well as the odd impromptu cover, appearing in their live sets. They played the ‘In the City’ showcase in Manchester, and at SoundsLive at the NEC, before entering the studio to record their double A-side release ‘You Got To Tell Me/The Same Place’, due in April 2009. Determined to capture their raw live energy, the songs are recorded largely live, and offer a concise illustration of their fresh blend of earthy drum and bass, stylish retro-pop, and the clanging guitars of ‘60s/’70s Garage-Punk.

EMMY THE GREAT ON TV NEXT WEEK !

Did the Brits piss you off ? Well let’s face it, if they were a true testament to talent then our fave singer, Emmy The Great, would have Brits and Grammys  by the bucket load !  But at least those of us “oop north” can see her on telly soon as she gives a fabulous performance on “Channel M” , or “Channel Em“, as we will call it in her honour. Witness the wonderful moment when she is interviewed, and asked the question ” So Emmy, where is  the best place for people to buy your CD ? “ To which she responds, …“erm…not Wooloworths ?” – Genius ! Gotta love her ! Check out the TV schedule here and previous performances here

Song of the week

“Dylan” By Emmy The Great

Wednesday 25th February (over 18s only)

It’s been one year since Revolution was unleashed in Liverpool and after 12 months of mid-week mayhem it’s time to celebrate the city’s best alternative night.

On Wednesday 25th February, Revolution presents an alternative birthday bash  Fancy dress is essential for any good knees up and with the theme being Zombie School Disco you can create some twisted costume creations. Think Michael Jackson’s ‘Thriller’ video crossed with Britney Spears and you’re in the right ballpark. There will be ticket giveaways for the best outfit and the first 100 people through the door get a limited edition Revolution gift.