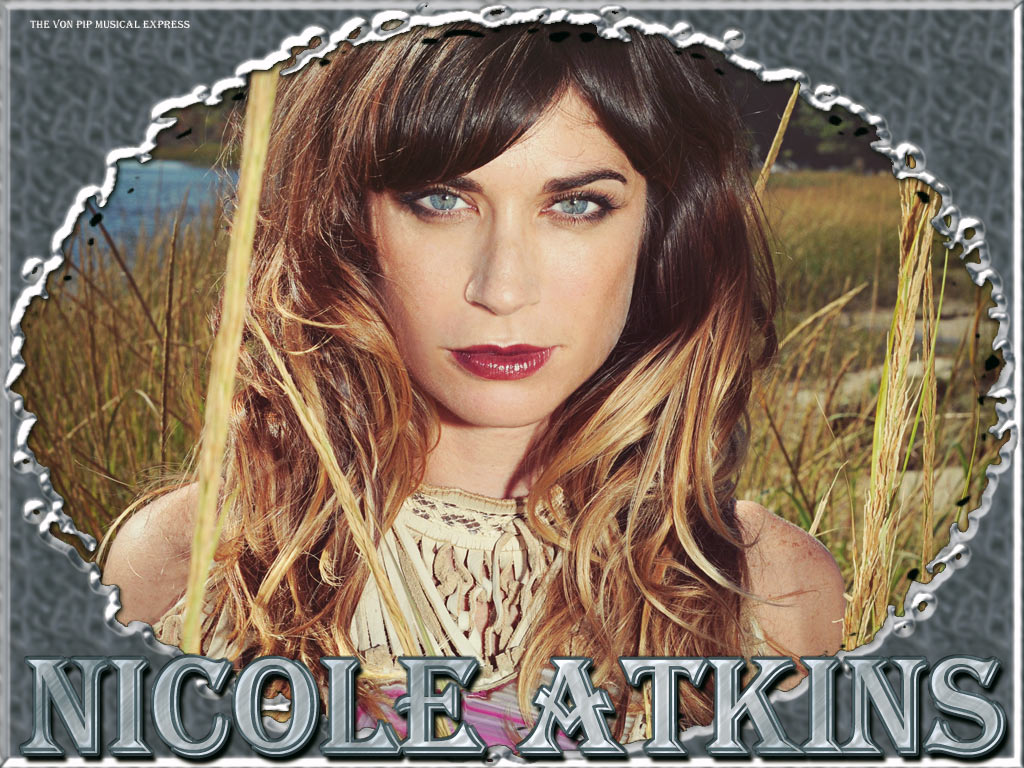 Nicole Atkins returns with a new album, ‘Mondo Amore,’ the follow-up to her critically acclaimed 2007 début ‘Neptune City’. Whereas her  first album was full of nostalgic, warm affection for her home town, ‘Mondo Amore’ is much more  rooted in  emotional turmoil  than time or place, or as Nicole puts it ‘a record about heartache and finding a way out of that. It’s songs for people to f*ck and fight to.” Well given the choice we’d take the former over the latter any day, we are lovers not fighters,  but when you’ve listened to the album and understand the seismic shifts that Atkins was experiencing personally you’ll know exactly where she’s coming from. It’s deeply personal album written at a time which Nicole describes as ‘dark – writing these songs were my way of trying to work out what was happening.  I was breaking up with my boyfriend, my original band, and my label, all at the same time!’

As you might expect it’s much rawer than ‘Neptune City’ both in terms of its lyrics and musical style. The tone is set for the album with the atmospheric and rather eerie  ‘Vultures’ as Atkins broody, sultry vocals warn  “Careful where you walk/Remain in the light/Watch where death resides/It’ll find you from all sides.”. ‘Cry Cry Cry’ is in a similar vein to songs on ‘Neptune City’ with it’s killer Motown chorus, in fact it’s only when we get to track four ‘You Come To Me’ that Atkins new, more volatile sound comes to the fore, as her band, who she describes as ‘“the best line-up I’ve ever played with,” rock out, as they say.   ‘My Baby Don’t Lie’ has a bluesy almost Zepplinesque quality to it whilst ‘This Is For Love’ sees her back in euphonious Phil Spector Pop Noir territory.  Atkins has the sort of voice that you could happily listen to if she were to simply croon the contents of the  phone directory, she was clearly born to sing and ‘Mondo Amore’ showcases her spectacular pipes to maximum effect, no more so than on the epic closing track ‘ The Tower’ .  It’s an album you feel would take an a whole new dimension in a live setting too, and if you were a fan of ‘Neptune City’ you’ll find much to enjoy and admire on ‘Mondo Amore’ . If you don’t, well, I’m afraid you’re possibly a bit of a dickhead.

We had a chat to Nicole about the album, and the huge personal changes that informed the making of her new album.

VP: Hi Nicole, last time we spoke, you’d finally prised your hand from David Letterman’s vice like grip, appeared over here on Jools Holland and released Neptune City . Now you’re back with a new album, a new band, a new label, a new lease of life….so what happened in between…?

NICOLE: Oh good lord, well to keep it short… I started writing this record, fought a ton over creative choices with my label, split with my label. Fought a lot with my now ex boyfriend, got rid of the boyfriend and the apartment. Grew musically disconnected with my old band, got a new band. During all this, I got together with my friend and producer Phil Palazzolo and started making ‘Mondo Amore.’ I moved back to Brooklyn, got inspired, got back into living, making things, finished the record and got a new home for it on ‘Razor and Tie.’ And now I’m touring like a maniac.

VP: So whereas Neptune City was a reflective, somewhat tender homage to your home town,’ Mondo Amour’ seems to be much more feisty, not angry or bitter, but there’s certainly an emotional rawness and honesty…it’s been described in some quarters as a break up album.  Was it difficult to write or did the emotions involved make it easier to express how you felt?

NICOLE:  Some of it was difficult to write because even though I was really confused as to where my life was headed I didn’t want to come off as bitter. I didn’t want to throw any cheap shots. Making this record in a way helped me to articulate my feelings on situations and about myself and helped me to feel more adult and caring on a lot of the situations. Now I still have no idea where my life is headed, but I love that fact.

VP: Is ‘Mondo Amore’ more ‘YOU’ . I mean it rocks, and I do wonder if on a big label (as with Neptune City ) they’d push you toward a more pop, commercial vibe. You know, the  old ‘OK, let’s lose the guitar solo there and try some strings’ sort of thing ?

NICOLE:   This album is a million percent me. No meddling from any suits.

VP: And what was the reason you moved from Asbury Park to Brooklyn, was it to make a fresh start, put the past behind you and look forward?

NICOLE: Exactly. I needed to spread out a little in an area that was alive. Not to say Asbury isn’t alive, but you know man, it’s tiny.

VP: I really enjoyed those mini Gothic trailers you made for the album, how did they come about and what the devil was  going on ???

NICOLE:  I made these with my good friends Lucia Holm and Mandy Bisesti. They are brilliant photographers and we talked about making teaser videos to accompany the songs that had the feel of a devil at the crossroads thing meets 70’s B- horror like “Valerie and Her Week of Wonders,“ and elements of the occult. We wanted them to convey the mystery of a giant personal shift.

VP: What’s the big difference now with being on a smaller label as opposed to a big label? For example is having to think creatively and do things differently much more satisfying, gathering a group of people around you who you trust rather than maybe being surrounded by bean counters who are more interested in profit than the artistic side of music?

NICOLE: The creative control is the best part of being on an indie label. I rediscovered the joy of why I do what I do. However, the budgets are significantly smaller. hahah.

VP : The cover of Mondo Amore? What’s the idea behind it and who came up with the concept?

VP: Senior [ on the cover] has a few interesting tattoo there. Tattoos of course were popularised by sailors and being a lady who seems to be inspired by all things nautical ( The Sea, The Black Sea, Neptune City etc) have you got any tattoos yourself?

NICOLE: I do not have any tattoos.

VP: Strangely I have one of Popeye, but moving along , are you planning on another visit to the UK this year? Maybe play some gigs.

NICOLE:  I am! I can’t wait to go back. We’re just figuring out all the logistics now. The UK is one of my hands down favourite places to play.

VP: What’s the best advice you’ve been given?