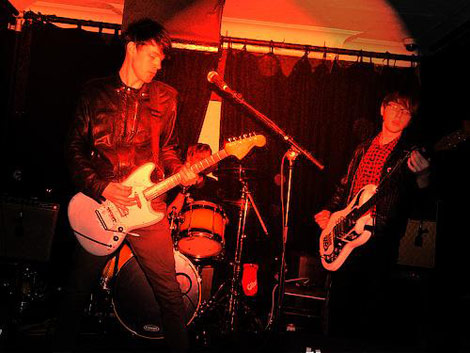 Surf rock is an eternally cool sound (thanks in no small part to Pulp Fiction) undoubtedly steeped in retro appeal. But One Fathom Down are no lazy looters of the rock n’ roll past, taking their lead from 90’s underground sci-fi surf sensations Man Or Astroman? Their punk attitude ensures a fresh take, pushing the limits of the genre by adding a harder edge to the music giving it a new urgency while still managing to keep things party-tastic. With no pesky lyrics and vocals to get in the way the audience just gets to bathe in the awesomeness of it all. Tony’s guitar becomes the lead voice, racing alongside the growling basslines and rolling drums – rest assured this ain’t no background music! Each tune is unleashed upon the crowd with surprising and welcome venom – sweet electric melodies colliding with stomping riffs. While between-song banter is kept to the bare minimum and there’s no fancy stage visuals, the band do have great stage presence and the occasional old B-Movie snippet helps keep the excitement ramped up.

Towards the end of the set Tony steps into the crowd to eyeball the punters while he continues to crank out deliciously raw reverberations from his guitar. This in-your-face moment sums up the performance well. He returns to the stage and the band triumphantly thrash out their final tune, which may have been called ‘And Her Brain Completes the Circuit’. Fantastic. The band has only been together for five months, yet have already managed to support surf hero Dick Dale and on the evidence of this show are breathing new life into the London live scene. Pass the sunnies and the factor 55 – the soundtrack to the summer (and beyond?) is here.

One Fathom Down –My Space