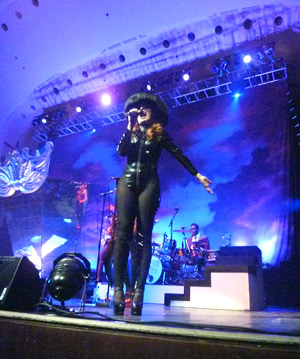 There are some musicians and artists whose work you admire, informed as it is by existential angst, a sense of righteous injustice, and a wish to set the world to rights. However you wouldn’t necessarily want to go out for a pint with them, if you know what I mean!  Paloma Faith on the other hand would surely be the life and soul of any party, with her  impish sense of humour, her eye for the dramatic gesture and a sense of style that makes haute couture look somewhat twee and ‘street’ .   The overriding impression that lingered in the aftermath of her incredibly  entertaining show at Liverpool’s Philharmonic Hall was two-fold, A/ that you had just witnessed a major talent , contemporary yet timeless  and B/ What on earth does she wear when she pops out to the supermarket  for a pound of spuds ! !!  Her performance in Liverpool was  full of theatrical drama, underpinned with an endearing sense of kooky self awareness from an artist whose stage personae resembles a character who’s  just stepped forth  from the pages of a fairy tale.

I first interviewed Paloma back in 2007 in the days before she had signed a big record deal and was pretty much unknown outside of London.  Indeed Paloma’s mum Pam (who is  totally ace) informed me that The VPME was one of the first to spot Paloma’s genuine talent and potential , (which is obviously nice,) and on first listen to Paloma’s demos it was obvious to me, at least,  that  she definitely had that special something that marked her out as a star in waiting.

citing the fact that it was too  glossy, that slick production values had ripped the heart out of her  songs and dulled her edge.  Personally I’d never had any such problems with the album, there was more than enough going on to keep me happy and of course there’s ‘The  voice’. And it’s a  voice that’s actually even more impressive live than on record and one that contains more soul than an all-nighter  at The Twisted Wheel.  The live performance is essentially what Paloma is all about, for its on stage she becomes almost a force of nature and in this environment  her songs truly come  to life and take on a whole new dimension, this lady is quite simply a natural born entertainer.

Teetering on outrageously high-high heels and adorned in the sort of outfit that makes  Catwoman look like Anne Widdecombe  visiting Planet Frump on dress-down day,  Paloma belted  out tune after tune with such exuberance, energy  whilst displaying  the sort of contagious  sense of fun that surely  only the hardest of hearts would fail to be stirred by.  Backed by her incredibly accomplished band she switched effortlessly between intimate slow burning torch songs, summoning up the ghosts of Etta James and Billie Halliday  through to jazz, soul, pop and even the sort of full on  rock that Dave Grohl would raise  glass to,  without skipping a beat .  The show in Liverpool, as part of the city’s excellent Sound City music Festival wouldn’t be complete without the obligatory Beatles cover  and the crowd rose to their feet as Paloma instructed them to turn the normally sedate environs of Liverpool Philharmonic Hall into a mosh pit before performing a blinding version of  “ You Never Give Me Your  Money”

This was pure entertainment of the highest order and demonstrated that any opinion offered on  Paloma as an artist is completely invalid until you have actually experienced  her live.  The hour and a half  long set fairly whizzed by which  included  costume changes,  Paloma attempting to turn  the audience into a ‘water feature’ and a remarkable version of David Guetta’s ‘Sexy Bitch” (minx). In conclusion this was an utterly  spellbinding performance from start to finish and one in which  the audience responded with the sort of enthusiasm usually reserved  for one of their own. It’s a beautiful  thing when you leave a gig  transformed , uplifted, euphoric  and almost a better person than the one that arrived-  this  show genuinely gave rise to such emotions .  As the evening reached it’s conclusion Paloma  announced that she’d be back on tour  in September  promising a show that  would bigger, better stronger , faster and  you instinctively  knew that the vast majority of the audience here were already counting down the days until she returns-  I’ll certainly be at the front of queue!  A night to remember from an artist who will surely be around for many years to come.