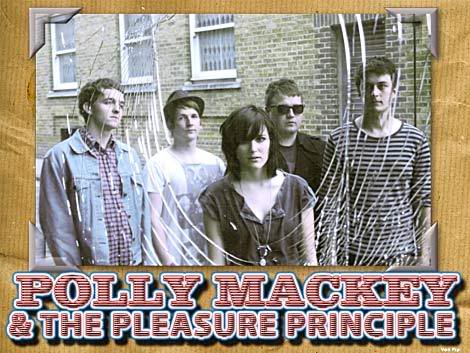 “The Way It Works” By Polly MacKey And The Pleasure Principle

Polly MacKey’s first public performance came when she was just shy of her sixteenth birthday, at a family party. As chance would have it a local promoter was amongst the guests and he was so impressed with her performance he signed her up for a number of local gigs. Polly’s acoustic shows were extremely received but she felt that she needed to expand her sound. She reasoned that her songs would benefit from being performed by a full band and that such a move would also enable her to remain true to her musical influences. To that end she hand-picked some of the finest local musicians and Polly Mackey & The Pleasure Principle was born in 2008. The addition of a full band immediately added the extra sonic dimension to Polly’s work that she’d been looking for and before long the band soon attracted interest from producer Paul Grady. Paul had previously worked with bands such as Howling Bells and a number of sessions were recorded at the renowned Real World Studios which served to demonstrate  the phenomenal potential this band have

The industry buzz surrounding Polly and the boys continued apace, aided in no small part by playing at the SXSW music festival in Texas which received rave reviews. They also secured a slot at the Benicassim music festival, beating off competition from 1,700 other bands to take their place on stage  alongside the likes of Oasis, The Kings Of Leon and Franz Ferdinand.  It certainly looks  like now’s the time catch the band at an intimate venue before they take the music world by storm and 2010 should see them continue to win plaudits from fans and industry insiders alike. There’s no doubt that Polly has exactly what it takes to become a major star, her literate thought provoking songs are brought to life by her incredible voice which has that rare quality in that it can effortlessly convey joy and despair, light and shade, without seeming to skip a beat, and of course The Pleasure Principle produce a sound that could be described as  tighter than Dawn French’s trousers after a midnight feast.

Comparisons are bound to be made, the style and attitude of a young Chrissie Hynde, the cool edginess of PJ Harvey and the pop sensibility of Blondie,  all underpinned with the sort of quality song writing that can’t be manufactured or bought, it’s a natural gift and one that should ensure the band are destined for even bigger things over the next year or so. Keep your ears peeled….we spoke to Polly about what she’d been up to over the last years or so.

VP:  You’ve been described as a “precocious talent”, when did you first take up the guitar and start song writing?

POLLY: I first took up the guitar when I was about 10, I had a little set of drums for my birthday so for Christmas I got a bright red Stratocaster from Argos. I played on and off for a while but really got my passion for music and playing when I was about 14 or 15.

VP: Can you remember the first song you ever wrote?

VP: You’ve won song writing awards and played SXSW, what have been your highlights since becoming involved in music?

POLLY: Yeah SXSW was an experience to say the least! We had 9 gigs in 5 days so it was one big blur. The FIB Heineken Festival we played at this summer was great, though forest fires and high winds started an hour after we played and Kings Of Leon pulled out and the place was shut down for the night, so we were pretty lucky we got to play!

VP: Where and when can people get your music, is a debut album in the pipeline?

POLLY: This is something we’re being asked all the time. I’ve been writing new material all year and we’ve spent the summer rehearsing and refining it. We are gigging extensively for the next few months to see how it comes across live; that will then determine the tracks that we go into the studio and record.

VP:  Which musicians do you most admire and why?

POLLY: I love bands like Radiohead, Arcade Fire, The Kills, PJHarvey – they just seem so completely in control of everything surrounding their music and artistic direction.

VP: What made you came up with the name for your band “The Pleasure Principle” are you  a fan of Sigmund Freud , Janet Jackson, Gary Numan or René Magritte? Which is it ? ;)

POLLY: I’ve always liked band names with abit of relevance to the people in it. I was due to study a degree in Philosophy and English but decided to make something out of my music instead, so thats the Sigmund Freud link. I also have Gary Numan’s album and always thought it would be a good band name – plus alliteration goes a long way.

VP: What’s it like being the only female with an all male band. Does the battle of the sexes rear its head on tour ….

POLLY: I never think about it much. I was a tom-boy when I was little and most of my friends throughout life have been male so it’s no big deal. There is a noticeable difference in cleanliness and smell though, once you spend a while in a hotel room!

VP: What do you make of the trend over the last few years for band “reunions” , do you think this appetite for nostalgia can move the focus away from younger, upcoming bands?

POLLY: I think some of the reunions are great, as it gives people of my generation the chance to go and see bands that they thought they’d only ever be able to hear on CD. Though I think most of the more commercial pop reunions are slightly wearing.

VP:  What part of being a musician do you enjoy best, recording, touring song writing?

POLLY: It’s always enjoyable to write a song when it sounds good, but I always find myself getting excited to see how it’ll sound in a live environment – that’s where the real reward is.

VP:   Five songs you wish you had of written are?

All My Friends – LCD Soundsystem

Dying On The Vine – John Cale

Sound of The Underground – Girls Aloud.

“The Wall” Live By Polly MacKey & The Pleasure Principle