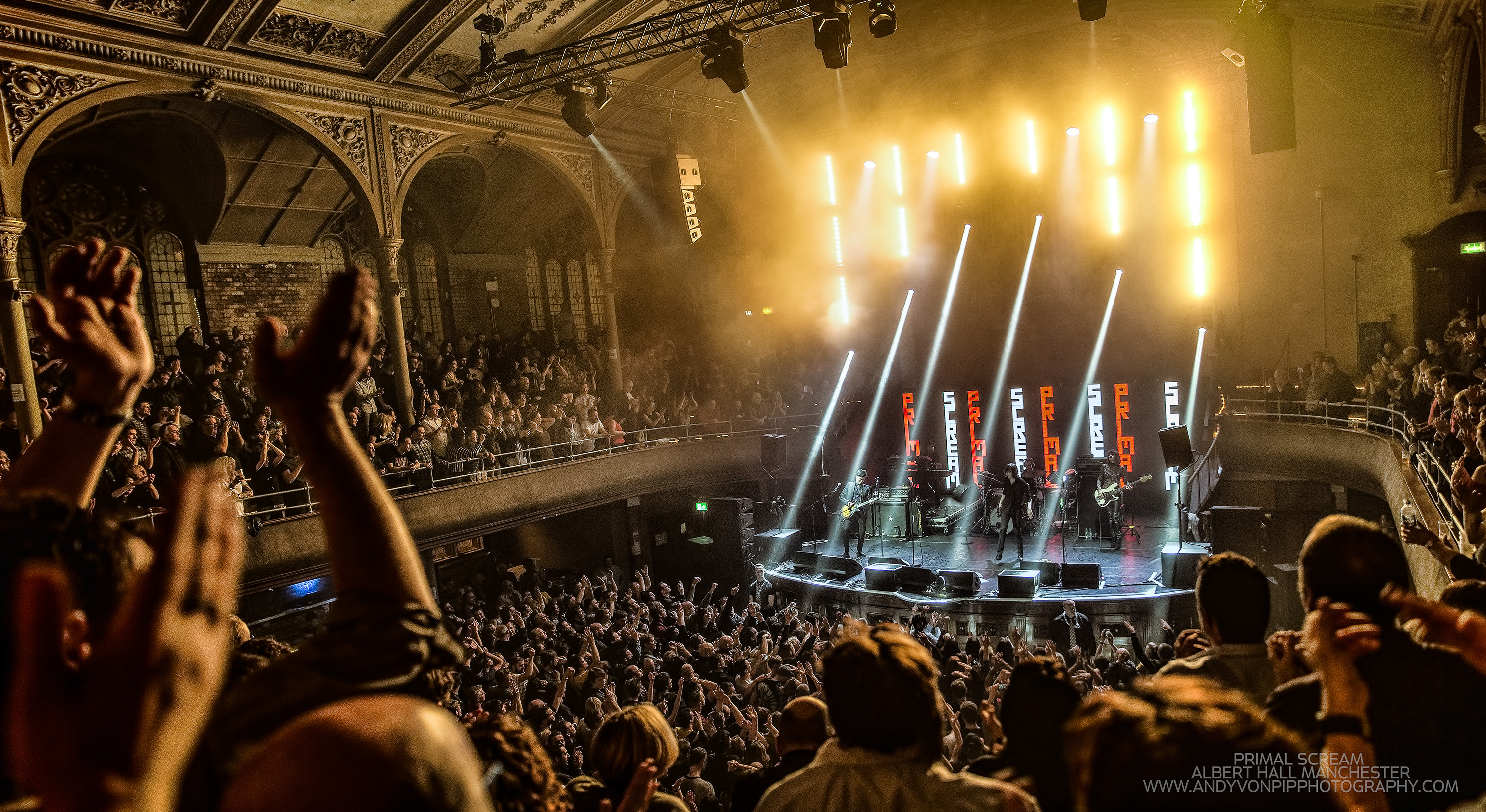 After thirty odd years in the game, we can happily report that Primal Scream still have that incendiary rock and roll fire burning in their guts. Their recent mind-blowing gig at  Manchester’s Albert Hall was a perfect example of why Bobby Gillespie and his cohorts have remained at the top of their game for so long.  Seriously, (and without getting into a class war debate here :) ) f*ck the joyless cynics and middle-class critics tapping away on their crumb encrusted keyboards who seem to relish the chance to give working class bands a kicking for not knowing their place because Primal Scream are a simply magnificent live proposition. We appreciate music is subjective, but one does wonder if people who write about music, actually, y’know –  even listen to or like music ? There are some who see Primal Scream as nothing more than musical magpies, constantly attempting to latch on to the zeitgeist.  But a show like this merely exposes the sheer wrong-headedness of such a dismissive closed-minded perspective.  Gillespie has always been an avid consumer of music, a restless spirit never content to limit himself to one style or genre, or simply reheat and rehash a winning formula,  a fact which has consistently made Primal Scream such a fascinating and occasionally infuriating proposition.

Not that any of this matters to the congregation tonight who have gathered in converted Wesleyan chapel to pay homage to their heroes. This was a partisan crowd, one who you might reasonably expect to start burning copies of the ‘Evening Standard’ in protest after their woefully inept and wide of the mark “review” of ‘Chasosmosis.’ It’s also a crowd who know their musical onions and who were generous in their appreciation of support act Bo Ningen‘s intense, theatrical psychedelic wall of sound .

The deafening applause that greeted Bobby Gillespie as he bounded on to stage before the band launched into the euphoric gospel soul classic ‘Movin’ On Up’  gave you the sense that this had the hallmarks of becoming a classic gig. What followed was a perfectly judged mixture of the Primal’s back catalogue and new material, surprisingly featuring just five tracks from their excellent recent ‘Chasosmosis’ album. It combined their many incarnations featuring their stomping stadia straddling rock n roll, socio-political techno-punk  right through to their more recent soaring electronic synth- pop.

Recent single ‘ Where the Light Gets In’ saw Bobby joined on stage by Hannah Marsden of The Snides, who took over the Sky Ferreira vocal with some style and proved Primal Scream can write intelligent commercial pop.  ‘Kill All Hippies’ was majestic and sprawling, driven by Simone Marie Butler‘s throbbing bass funk.  ‘Shoot Speed/Kill Light’ was twisting and relentless as was Andrew Innes mind-bending guitar work whilst the paranoid, monolithic dystopian metal-disco stomp of ‘Swastika Eyes’ was just fucking glorious. 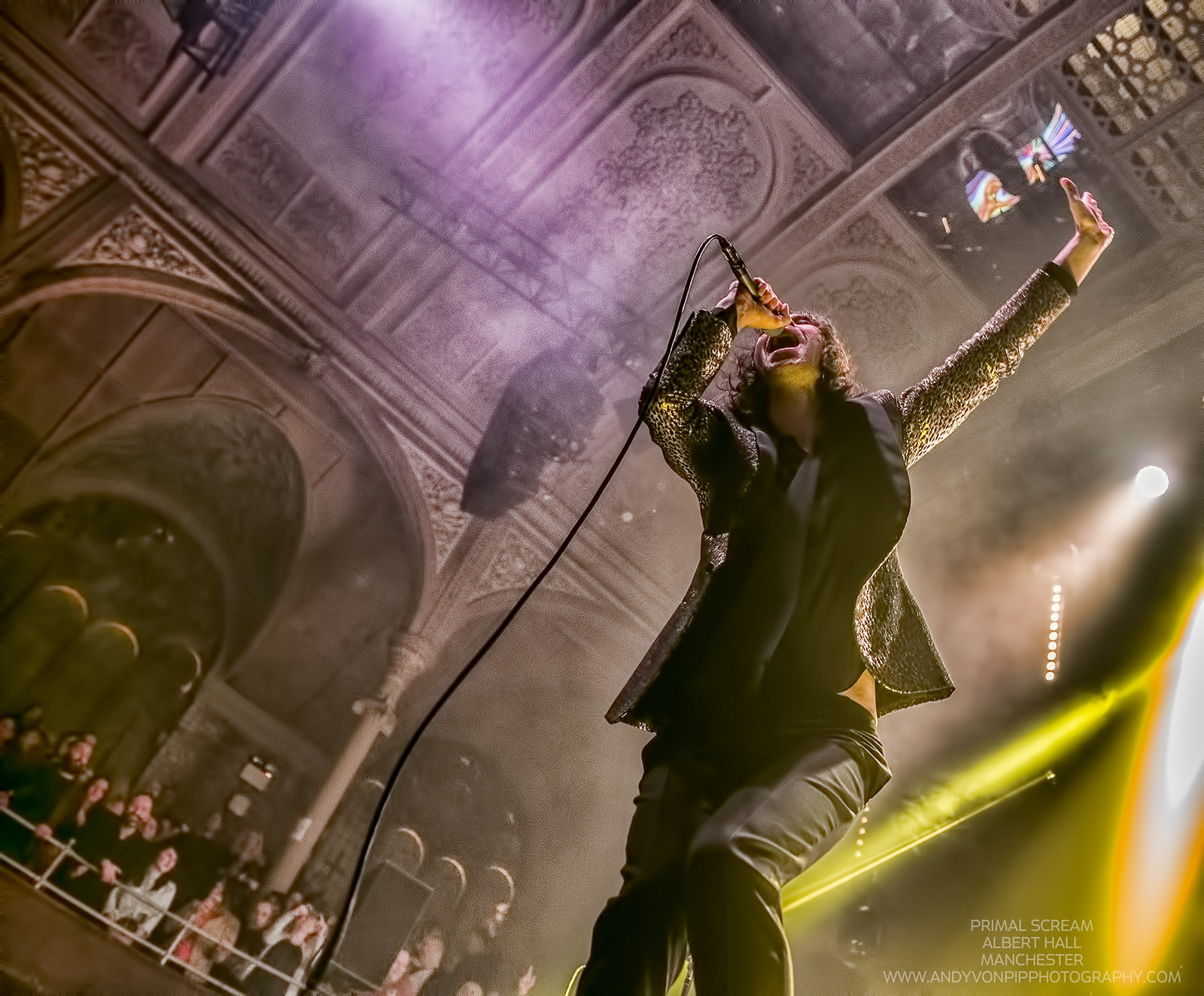 Having caught Primal Scream on a number of occasions over the years, this has to be one of the greatest gigs we’ve attended in living memory (alongside The Mary Chain’s recent shows) . A genuinely life-affirming experience, full of passion and vigour whilst filling you with the sort of post-gig euphoria that betters any chemically induced high! It also featured Bobby Gillespie sporting a grin to rival the Cheshire cats and putting paid to the tiresome ‘dour scot’ stereotype employed by lazy Sassenach hacks   :)  – live music really doesn’t get any better than this. It would seem churlish to suggest how this show could have been improved upon, although we would have loved to have heard the beautiful, evocative ‘Autumn In Paradise’ live… then again, perhaps it’s for the best, nobody really wants to see a grown man weep in public :) .  If you fancy being lifted higher than the sun, then you really do need to catch Primal Scream live, there are few bands that can live with them when they are on this sort of blistering form. 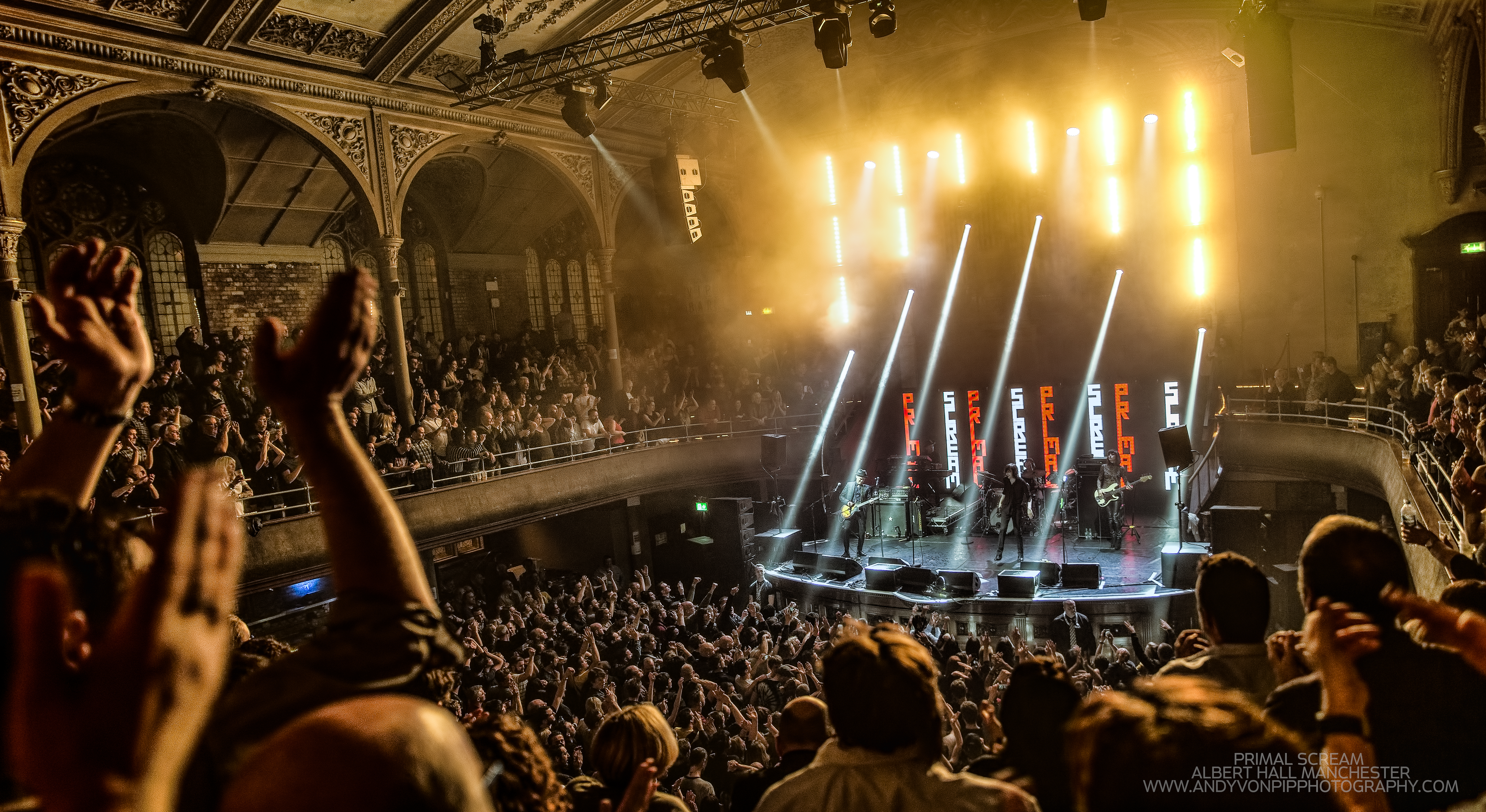 Where The Light Gets In

When The Blackout Meets the Fallout

Trippin’ On Your Love