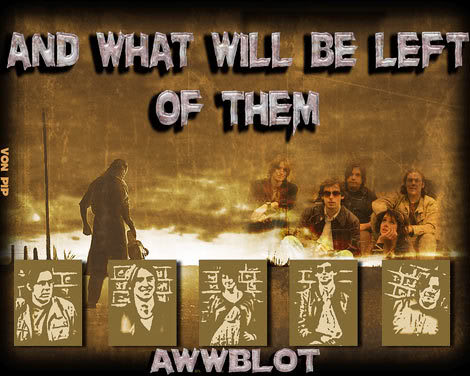 “Come With Me ” By And What Will Be Left Of Them

The Band : And What Will Be Left Of Them
The Line Up : Red White -Vocals, Blue Peter -Vocals /Guitar, Chris Wemyss-Drums, Matt Pooler- Keyboards, Joe Beech-Bass

If you say the word “Worcester” people will immediately shout back “Sauce”, thats a fact. Yes indeedy it appears that the areas most famous export in recent history has been that delicious hot and spicy condiment “Worcestershire Sauce” which can add great flavour and depth to seasonal dishes such as Lancashire Hot Pot, Shepherd’s pie and hey!! Why not try using it as a marinade for say…Steak …Hmmmm. The sauce itself was actually made by mistake by two chemists Lea and Perrin, but we don’t approve of product placement on this blog, so we’ll talk no more of this delightful substance. (Which incidentally can be found at a reasonable price in Tesco’s, Sainsbury’s Asda and a host of purveyors of fine condiments the length and breadth of “this other eden”.) But what of Worcester musical heritage, I hear you cry? Well there’s the world famous composer Edward Elgar and erm…Michael Ball, music hall star andproud owner of that grinning, ruddy, chubby circular face much loved by middle England’s housewives and my nan. Erm Mmm, Ok now I’m struggling but all is not lost as Worcestershire now have new musical champions, in the form of the oddly named “And What Will Be Left of Them.”
Elgar was no snob, he once stated “There is music in the air, music all around us, the world is full of it and you simply take as much as you require.” Now this may well sound a little as if Eddie was encouraging the illegal download of music but in reality I think it’s more likely he had bit of a Punk D.I.Y. ethic, (he was self taught in musical theory,) take your influences and make them into something relevant to you. That’s exactly what “And What Will Be Left of Them” has done, they produce a riotous sound which you can leap around to like a loon. And it’s great , its Punk you can dance to, not just pogo to, but you can actually dance to it !! ( well I can’t being Rhythmically challenged, but you know what I mean).“Dark World” fanzine described them as “the best proto-post-neo-punk- electro poptart band ever”, which is a pretty darn good description. They have toured with the likes of Misty’s Big Adventure, Forward Russia!, Art Brut, iDou, The Hot Puppies and The Loves and have built up a loyal fan base. Their most recent release “Come With Me” is a hypnotic hook laden treat which has attracted the “both cab doors open” sized ears of the great Steve Lamacq. So let’s find out what they have to say for themselves eh? (well Pete anyhow)

VP: Where did it all start, how was the band conceived so to speak, and what was your plan?

Pete (AWWBLOT): We just celebrated our fourth birthday as a band so we must have started the band four years ago! It seems such a long time when you think about it… We were conceived as a drunken plan for world domination and I have attempted to stay true to the drunken part of that since day one. A big part of it was wanting to get as big as possible without having to move to London… which we’ve achieved to an extent – it’s just that now whilst 3/5 on the band live in Worcester, the other two live in Birmingham and Lancaster!

VP: What’s the name all about ?

Pete (AWWBLOT:) Amazingly, it was the only thing we could all agree on – which must give you an idea of how very very poor some of the other ideas we had were! It’s part of the tag-line from The Texas Chainsaw Massacre (“Who Will Survive And What Will Be Left Of Them?”). Chris (drums) is a big horror movie fan so it must have come from that.

VP:One question to unashamedly plug your wares. For the unenlightened what have you released thus far?

Pete (AWWBLOT):We’ve had download singles out on Filthy Little Angels and The Little Hellfire Club labels, and a CD EP out on Filthy as well.At the end of last year we put out our “Come With Me / Look In Your Eye” on pink vinyl on the Pop-Art label.

Pete (AWWBLOT):Well we’re finishing up our debut album at the moment so hopefully that’ll be finished in the next month. Then we’ll spend a couple of months trying to work out what label it’s going to come out on, then we’ll probably tour and tour and tour until it’s time to make another one! We’re off to Berlin for our first Germany gig in ages in a few weeks and I’m hoping very much that we’ll get to do some bigger tours this year… mostly though I just want to go on enjoying being in a band for another year… and record another Christmas single…

VP: Which current bands are you fans of?

Pete (AWWBLOT): It’s very hard to say – as a band we all have extremely different tastes and despite the fact that we’re really close knit we can absolutely detest each other’s music! Joe (bass) and I are pretty much indie pieces of shit (with a perculiar fondness for The Pogues) whilst Chris (drums) is more rock… Matt and Red (vocals) meanwhile have huge musical knowledge of differing genres…At a guess though I’d say the only bands we all agree on tend to be those that we’ve grown to know and love as people… Untitled Musical Project, The Hot Puppies, We Start Fires, Zebedy Rays, Brontosaurus Chorus, Kriss Foster, Subliminal Girls…

VP: If music is the food of love, whose the indigestion?

Pete (AWWBLOT): I’m not sure I really hate anyone enough to slate them when sober… Give me a drink though and I’ll probably let anyone who’ll listen know what I think on a variety of subjects – often including miniature lectures on 20th Century History I’m told…

VP: As a band are you a democracy? Or is it an evil dictatorship?

Pete (AWWBLOT):I often claim that I run the band as a benevolent dictatorship, but I suspect the others would disagree. It’s quite possible that they just humour Old Man Pete into thinking he’s the captain when they’re actually steering the boat…

VP: Do you get pre-gig nerves, do you have any superstitious routines. For example I hear Bjork eats a light “ lucky puffin casserole ” prior to each gig (not so lucky for the Puffin)

Pete (AWWBLOT): We did at first but not any more, we’ve probably played over 200 gigs now and whilst you occasionally get an attack of the butterflies they never really stay with you once you’re on stage. As for odd pre-gig routines, Matt used to always eat potato products before a show – but he’s kind of stopped doing that now.

VP: Any musician/producer etc you’d love to work with?

Pete (AWWBLOT): I think Chris would love to work with Steve Albini… I’d like to write some songs with Darren Haymen…

VP: The five greatest songs in the world are ??

Pete (AWWBLOT): …hopefully going to be available on the AWWBLOT debut album by the end of Summer.What an unbelievably crass answer…

AND WHAT WILL BE LEFT OF THEM? / BRONTOSAURUS CHORUS

Side “BC” – Brontosaurus Chorus:

“The Myth Of Love”, “Distortion Pop” and “Kirsten.”

‘And What Will Be Left Of Them?’ Black T-Shirts £12 Available in standard or womens fitted, sizes Small to Xtra Large

0 thoughts on “Red White And Blue Peter ..And What Will Be Left Of Them”