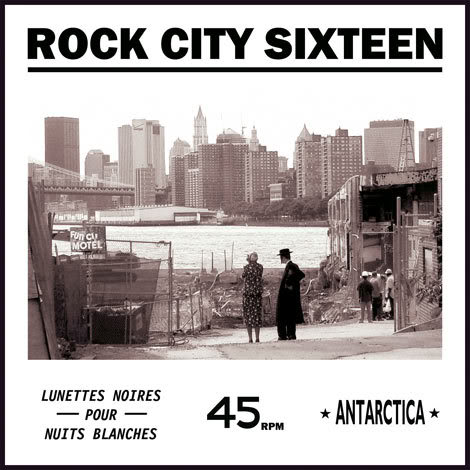 Havana Guns are no more!! But despair not as they have re-emerged with a new name and a sound that’s darker in tone to material released under their former appellative. Rock City Sixteen’s debut single may sound slightly more stripped down, with vocals not quite as upfront, and hooks maybe not quite as obvious, but yet again Zoë, Philippe, Linda and the gang come up with another edgy pop classic. “Lunettes Noires Pour Nuits Blanches” has the cool of the Raveonettes, the swagger of the Mary Chain, and the throbbing bass lines of New Order. It’s a hypnotic, pounding slice of pop noir, that as ever, makes you want to don a leather jacket, black shades and tear along the freeway, into the night, whilst at the same time receiving a spot of illicit felatio …Ahem! … The flip side “Antarctica” is another incredibly good track which has Zoë’s cool crystal cut vocals underpinned by a driving, relentless guitar riff that the Mary Chain would be justifiably proud of. The singles stark black and white art work is, as with previous releases under the Havana Guns moniker, stylish, cinematic, and cooler than Marlon Brando in an ice cream parlour in Antarctica discussing the weather with Martin Scorsese in a snow storm, it apltly reflects a band who posses the sort of natural bŏn tŏn other bands can only dream of.

This lot, have always been as cool as f**k, yes, they may have changed their name, but not their attitude, and they continue to produce classy, sexy, stylish pop, of the sort that really should see them, at least in any civilised society, feted as the saviours of popular culture. Alas in the UK folk seem to find the 21st centuries answer to Larry Grayson, Graham Norton , “subversive,” Mr Neatbeards “Deal Or no Deal” a “white knuckle ride “ and derive furtive cheap thrills from Katy Perry’s schlock about kissing girls. Lets be honest here, Ms Perry’s drivel is about as shocking and erotic as Nicholas Parsons attempting a centre parting… on a Sunday…in Shropshire. All is not lost however, as Rock City Sixteen offer us all a shot at redemption and provide us with hope, and hope is a good thing, maybe the best of things, and no good thing ever dies…

…..So stop watching “X Factor” and buy something real !