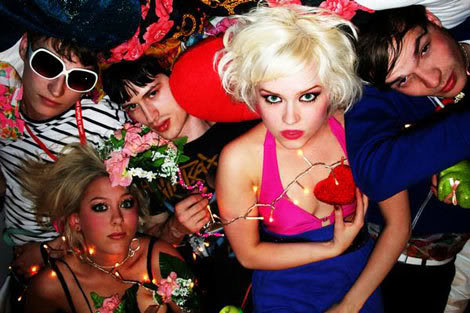 “Daydream” is not the sort of song you’d take to Mc Donald’s then ply with cheap cider in the hope of a drunken fumble, which ultimately would leave you feeling, empty, unfullfilled and a tad remorseful. No, no, this is the sort of song you’d take to the best restaurant in town wherein you would order the finest wines known to humanity, whilst being serenaded by the house violinist, before taking it home to cherish. You would also do well to regularly shower this song with flowers and fine Belgium chocolates, whilst regularly waxing lyrical about the affection you have for it. Yes indeed, this song is a keeper.

Whilst not quite as new wave sounding as previous Screaming Ballerina tracks such as Crucify and Poison, this is a dreamy Blondie/Spectoresque slice of pop which manages to embrace the 60’s and the 80’s in one fell swoop and reveals a mellower, poppier side. Front woman Laura sings her heart out to a tune that is as infectious as the flu in a call centre, (but is obviously a far more pleasant experience) and the Screaming B’s, sound, on this evidence, as tight as Dawn French’s tutu.

“Daydream” illustrates the promise the band have when it all comes together and it aptly demonstrates that Screaming Ballerinas have the potential to pull down pop music’s trousers and spank it’s smug little arse until it apologises for being just a bit crap lately…Just wish they’d release something official now !