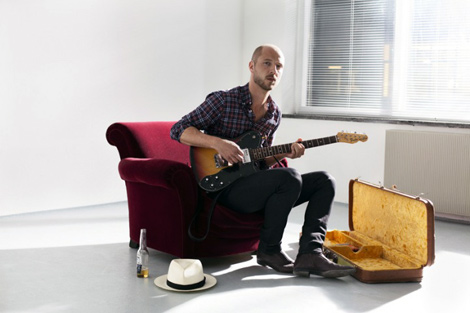 The oft-quoted punchline “Norway : nuls points” is not something you’re ever likely to hear in relation to the “Arctic Chanteur” from said country; Mr Sivert Hoyem. His previous band Madrugada turned out some staggeringly beautiful music and, in “Industrial Silence“, one of the great debut LPs.  That they remained basically to all intents and purposes utterly unknown on these shores is a continuing mystery. After the sad untimely death of guitarist Robert Buras, they called it a day, and Sivert pursued an equally enthralling solo career. Following the release of his most recent LP “Moon Landing” he finally arrived for his first ever 4 solo UK dates, Manchester’s compact and bijou Night & Day Cafe being the third. It’s a chilly October night outside but it’s hot as hell inside as the band take the stage in a haze of smoke and murky atmospheric lighting. There’s nothing pretentious about the guy at all, big sh*t-eating grin, and a “hello, I’m Sivert Hoyem and I’m a Norwegian” works rather splendidly as a no-nonsense introduction.

Sivert’s always been an artist who wears his influences proudly on his sleeve, but is never a slavish copyist.  As with Madrugada, you can see and hear bits of all sorts in the music, and there really is something for everyone in there:  The melodious sadness of Leonard Cohen, the one-foot-on-the-monitor preaching-the-hellfire-blues of Nick Cave & The Bad Seeds, the twisted folky Americana of Tom Waits or the Gun Club, a hint of the glorious aching emptiness of “Darklands”-era Mary Chain:  it’s all there, from the pure singalong pop of Moon Landing’s title track, to newer darker material like “Long Slow Distance”, which uncoils in a threatening murky evil floorboard-shaking hum.

Highlights are many: the mad top-hatted suited and booted axe-hero yeti that is guitarist Cato almost demolishes the stage and does himself a serious mischief as he slips on the remnants of a spilled drink and sends himself crashing to the floor during his limelight-hogging solo in “High Society” but doesn’t miss a note, Madrugada’s “Honey Bee” is twisted from a simple downbeat song into a sinister lecherous crawl, a raucous singalong of the anthemic “The Kids Are On High Street”…. but perhaps the best moment comes during a long and noisy feedback-drenched “Shadows/High Meseta”; as the band crank it up into a hypnotic Sonic Youth-style windout, Sivert slips off the guitar strap and falls to his knees and proceeds to ram the machine head of his guitar repeatedly into the floor of the stage, producing howls of white noise from the instrument, and he looks like a man possessed, almost obscured in the fog and the eerie green lights.

If you’ve never come across the music of Madrugada or Mr Hoyem before, do your ears a serious favour, and check him out.  After the London show the following night, he promised a “swift return” to the UK… you would be well advised not to miss him next time.