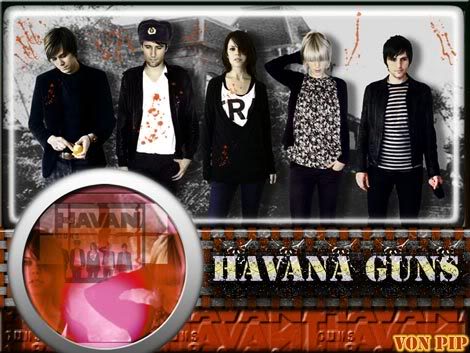 “My Surfing Days Are Over” By Havana Guns

Life can be funny,… unlike Jenny Éclair. But there are many other things that play havoc with my quest for meaning in life, for example, how did George W Bush attain power, how did Tony Blair become a political Del-Boy and sell the “WMD Could Be Deployed In Just 40 Minutes” scenario to parliament? Why is David Beckham so revered? Did Dame Thora Hird ever throw aside her floral nylon nightie and indulge in rampant rumpo,… like……ever …………And did I imagine it, but was racist, homophobe Jim Davidson, once considered a suitable candidate to present family entertainment on Saturday nights, at teatime! Yes such questions are irksome but they hardy keep me awake in the wee small hours. However one question and one question alone often keeps the sandman at bay, and it is this, “Why aren’t Havana Guns one of the most popular bands in the U.K? ”

The “VPME’s” nemesis, the ludicrously named “NME” called them” Blondie for the Libertines generation”. The band themselves describe their sound as “Motorcycle Pop”, but what delights would a casual listener expect to uncover? Well, imagine the Jesus and Mary Chain complete with Peter Hooks thundering bass lines, or Blondie forming a supergroup with The Sundays,The Primitives,and The Pixies or picture if you will, The Supremes hanging out in Surf City, The Shop Assistants mud wrestling with the Go-Go’s,(steady) or Lush jamming with My Bloody Valentine. Yes if you can picture all this and its sounds your cup of tea then, hey, get yourself acquainted with Zoë Durante, Philippe Di Nero, Linda Hollywood, Greg Gallo, and Nenad “Killer” Santiago. AKA Havana Guns.

Life, as I have mentioned can indeed be funny, but also unfair, I submit, if there really was such a thing as “Pop Justice”then Havana Guns would have kicked Simon Cowell’s high waisted derrière all the way to Devils Island for his heinous crimes against music, sentencing him to the dreadful (and some would say a too harsh) fate of listening to his own monstrous pop creations for all eternity. At which point Havana Guns would then emerge as our musical saviours, they would re-educate a post-Cowell world, and demonstrate that music really does matter, it can be good and just and have meaning. And Havana Guns matter, and Havana Guns have meaning and they are good and just and we should embrace them

So what’s all this “motorcycle pop” stuff about?

VP: Where does the name come from?

Zoe (Vox): We were initially called “Hamburger Buns”. When we booked our first gig, the promoter got the name wrong and put “Havana Guns” on the poster. Since the poster was already sent to the printers, it was too late to change it, so we simply adapted the name.

VP: You have been described as “motorcycle pop” band? What exactly does that mean and how would you describe your sound?

Philippe: That was from a US reviewer. I guess he probably meant that we mix some dark noisy sides with a pop songs. I liked the sound of it, so I put it on our myspace page as a quote. Greg (Bass) actually went as far as buying a motorcycle this summer.

VP: My space, the bee’s knees or the dog’s bollocks?

Linda: We all used to be MySpace addicts, we are currently being weened off it with a dose of Facebook.

Philippe: Why are there so many error messages all the time? They got $580 millions from Murdoch; couldn’t they spend 0.1 % of this money in bug-fixing?

VP: What do you think of the current music scene

Philippe: I am not very impressed with the current UK scene. To me it feels a bit like in the late 90’s when the music scene was just awash with thousands of Britpop clones. Everyone says that UK music scene is great now because there are so many bands doing well. I’d rather have few great band leading the way, than hundreds of mediocre bands swamping the scene.

Linda: Kaiser Chiefs just scare me. Every single one of them looks like a weird scary ventriloquist dummy. Specially the little man with the hat.

Philippe: What’s the deal with NME solely hyping bands based on the amount of hair (Horrors) and amount of tattoos (Gallows). What happened to the days when “Indie” was all about new and creative music?

VP: In the past you’ve released limited edition 7”s, any plans for Cd releases or an album?

Zoe: We are doing an EP next, this will be also on iTunes etc. No plans for an album yet: We are thinking of just releasing a series of singles and EPs, a bit like The Smiths and other Indie bands did in the 80’s.

VP: What have been your highlights of the year thus far?

Linda: We did this gig at the Barfly and some friend of ours prepared pyrotechnic FX for our stage show. On the first chorus of the first song, he had these fireworks go off, and set the roof on fire. The gig was stopped, and we didn’t get paid!

VP: Your record label is called Cigarette Music, any views on The UK smoking ban?

Philippe: I think a spitting ban should come next.

VP: Sum yourselves up in five words

I Want My Havana Guns

“She Always Goes Down” By Havana Guns

I love this band