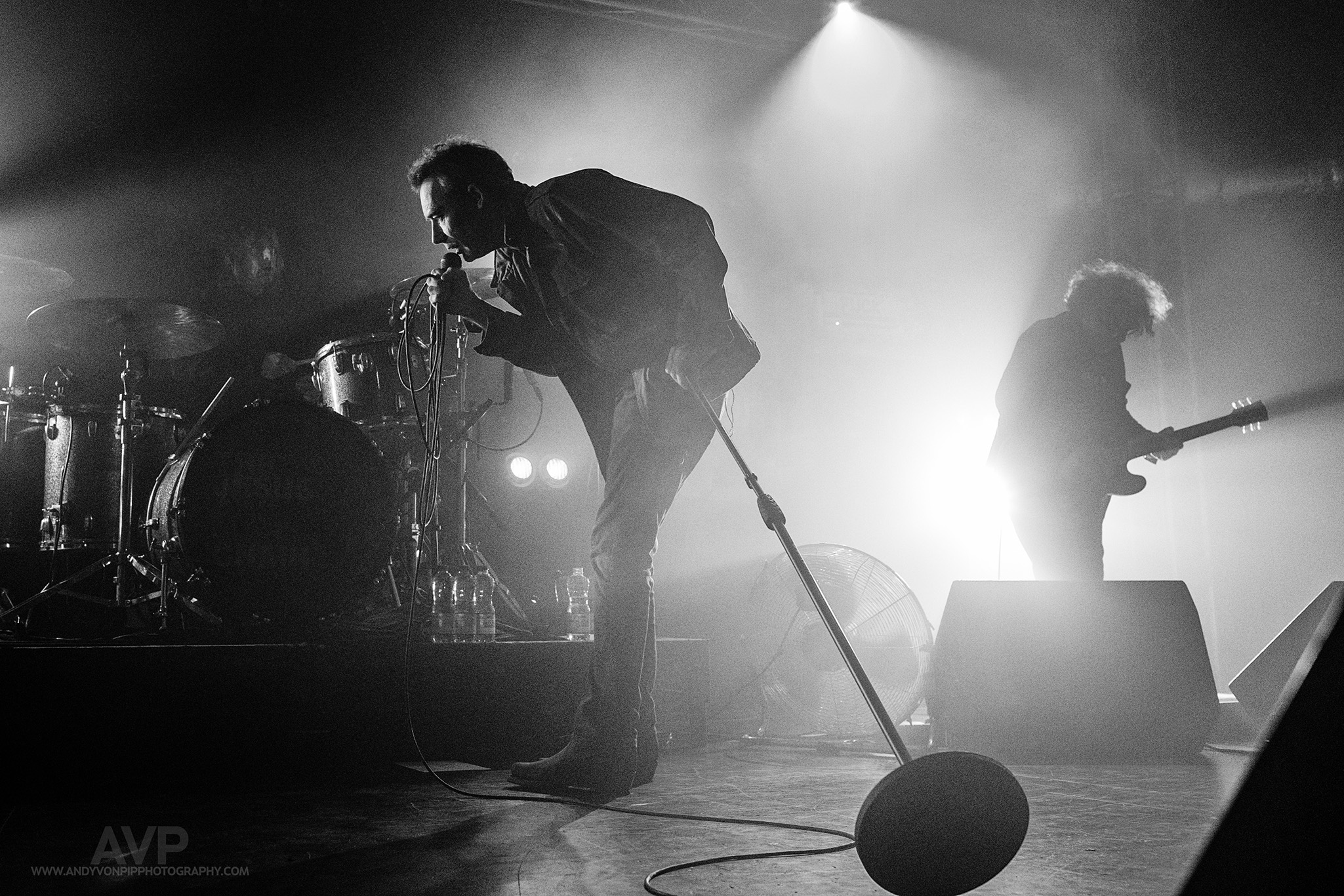 Richard The Goth, having recovered from his Max Cady style stalking of the world’s greatest band, reveals, from the perspective of a true fan , just what it’s been like to follow the Mary Chain on their recent Damage & Joy tour. He also recounts just what it’s meant for Mary Chain die-hards to get the chance to see the band in such blistering form and why they are still as vital and relevant today as they’ve ever been, 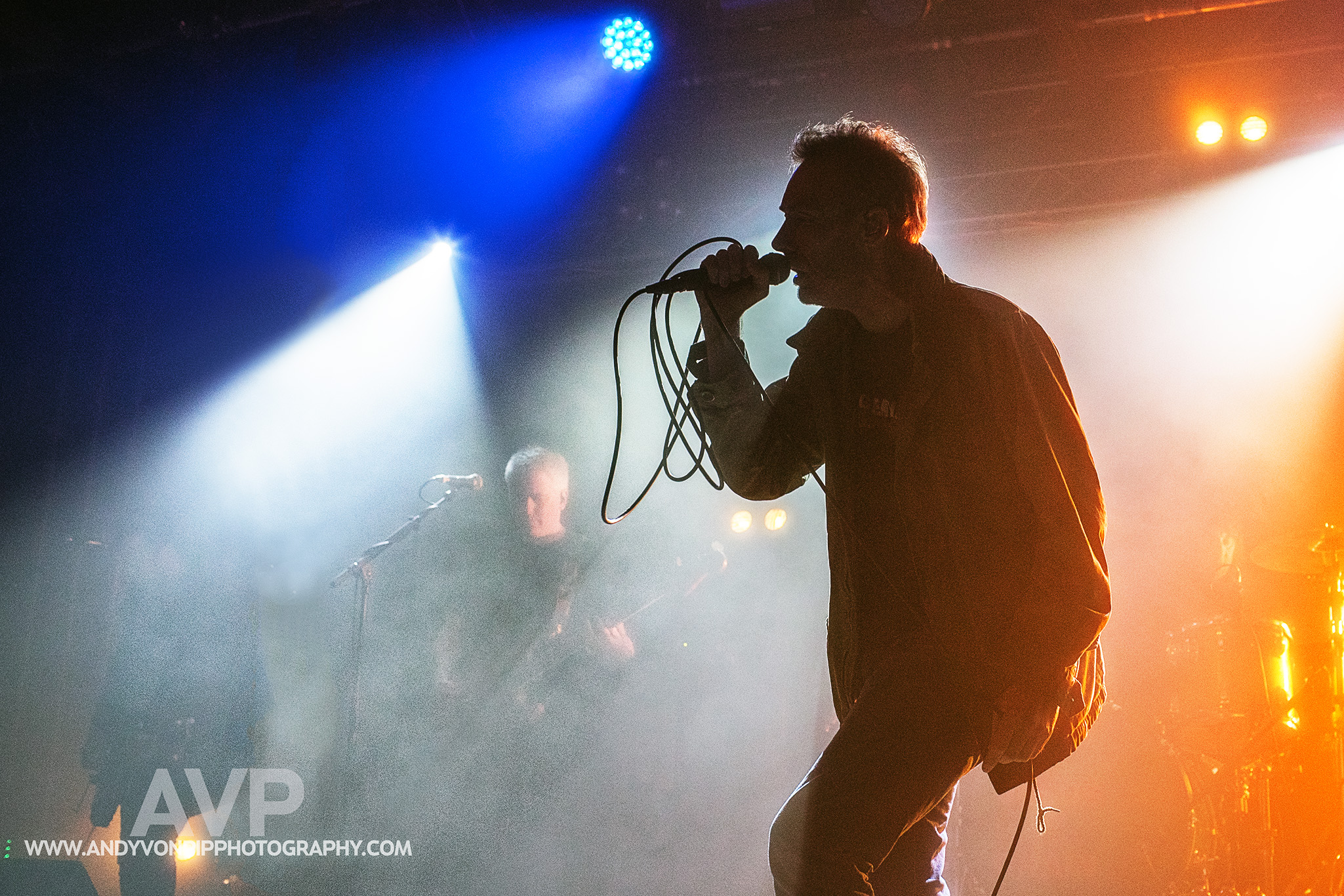 Just over a decade ago, introduced by Jarvis Cocker as part of his Meltdown 2007 Festival, a bunch of Mary Chain-shaped silhouettes stepped tentatively out onto the UK stage for the first time since its violent implosion almost another decade earlier. It was a gut-wrenching, emotional, shakily triumphant moment, but I doubt that any of those of us who were present that night could have imagined that it would come to this point in 2017 where we’d be watching a band once again at the peak of its powers, locked and loaded, peerless, essential.  The intervening years have seen a few line-up shifts, with Phil “the indie Zelig” and John Moore (once freed from the evil clutches of Edward and Mr Kingfisher) returning to do sterling work and play their part, taking tours of duty with the JAMC, but this current incarnation of Jim and William Reid, Mark Crozer now settled on bass, Brian Young keeping it all together in the rhythm section, and Scott Von Ryper of the Black Ryder torturing the hell out of the second guitar role, this seems to be the one that’s really nailing it. With some resurrected bands, you often find that you get one or two of the old original faces, and a couple of interchangeable session musicians to make up the numbers.  This is very much not the case with this band; they really seem to click onstage, they’re not there to do their job and then go on to the next paying gig, it’s not Jim and William plus A N Other x 3, these guys really are the Jesus And Mary Chain. 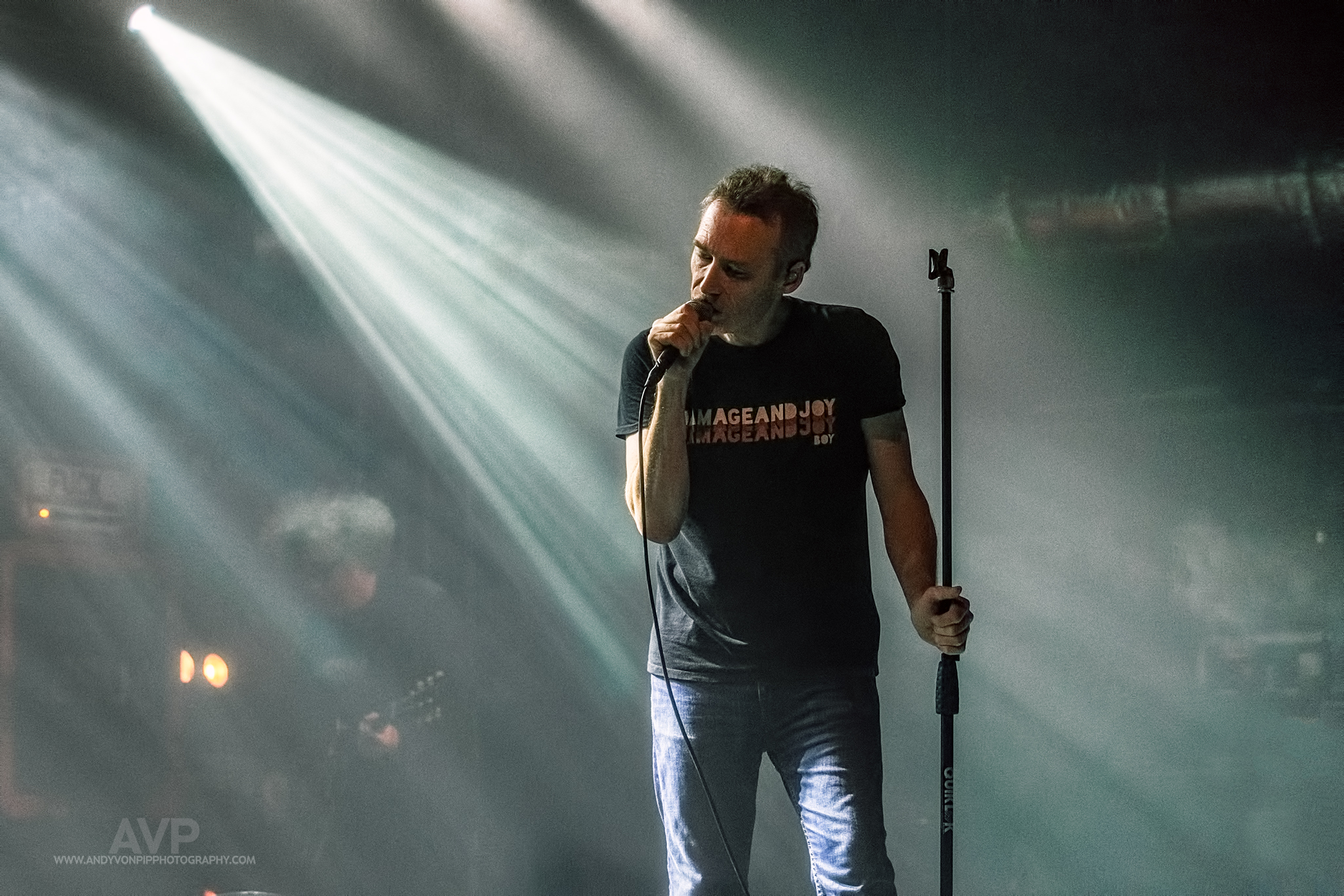 As soon as the band had made that return at the Festival Hall back in 2007, there was talk of a new LP, an “imminent” All Things Must Pass EP, and Jim stated in interviews that without that goal of a new record, the purpose of the reunion was only half finished. And of course, in true Mary Chain fashion, it then took them 10 years to get around to actually doing it! But we are Mary Chain fans, and we’re used to waiting. And we don’t mind waiting, because when they deliver, they deliver like nobody else can. And so, finally, in the early spring of this year, Damage And Joy, the first new JAMC album in almost 20 years, was unleashed. To die-hard lunatics who’d followed the various solo and group incarnations of both Jim and William since the band split, a large proportion of the songs that made up Damage And Joy were not particularly “new” per se. We’d heard them as Freeheat songs, Sister Vanilla songs, solo demos, uploads, whatever, but we’d never heard them quite like this. To hear works like Mood Rider, War On Peace, Dead End Kids, and Kennedy Song finally getting the proper Mary Chain studio treatment, re-titled in some cases, re-imagined, and re-invigorated, it was like hearing them as new songs anyway. When a band that’s been through so much, and has meant so much, gets back in the studio decades later, there’s always a tiny part of you that fears the outcome. Will they have lost it? Will they be trying so hard to recapture old glories that they fall from grace and destroy some of their legacy in the process? But with Jim and William, it’s different. Over the years, there have been a handful of bands and artists who, without actually seeming to try, just know how to tap into the darkest primal heart of rock ‘n’ roll. They mine a deep black bloody vein and make magic from the most traditional of formats:  Lux and Ivy of the Cramps knew how to do it, the Velvets knew how to do it, the early Ramones knew how to do it. And Jim and William Reid know how to do it better than any of their contemporaries. They are simultaneously old and new, you can see and hear every influence they’ve ever had, and yet they sound like nobody else before or since. The resulting LP is a thing of beauty, and it sits easily alongside their astonishing back catalogue as an essential addition to the JAMC’s body of work. It garnered good reviews, but still somehow managed to avoid the wider large-scale success and sales it truly deserved, but then again, that’s been another of the band’s traits for many a year now. If you don’t own Damage And Joy, you need to rectify that situation, and you need to rectify it now. It’s the sound of a band that still matters more than you can imagine. 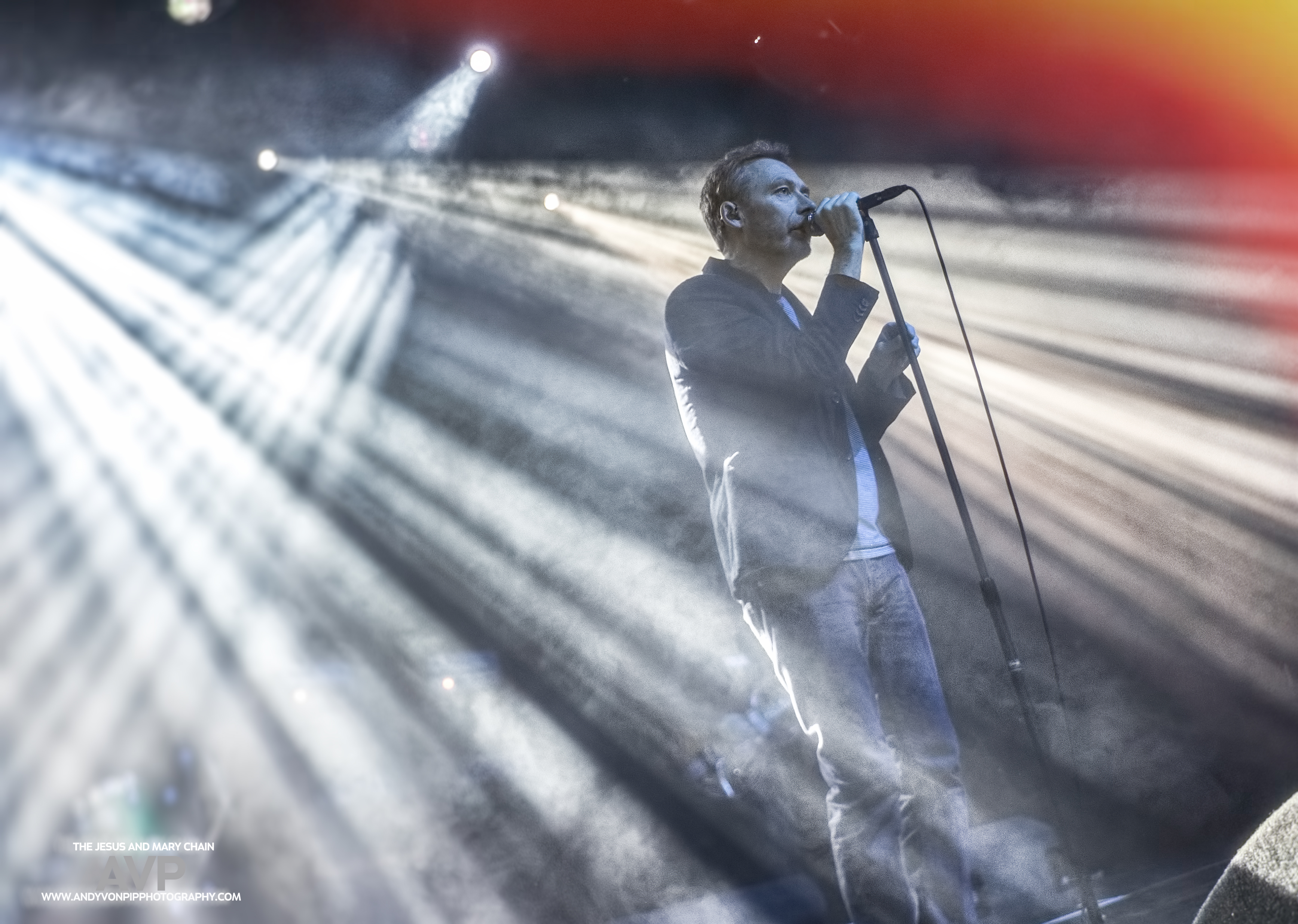 The tour to accompany the new record is seemingly endless. It started in the early months of this year, and has been snaking its way around the world ever since, and fired by this rejuvenation, I decided to pack a bag and haul my weary old carcass along to as many of the UK gigs as possible. The old carefree youthful days of sitting in a cold train station for 10 hours after a gig, or waiting in a bus shelter ‘til the sun comes up may be long gone, thankfully,  but the itch to intake as much of this revitalised Mary Chain voodoo as possible was too much. So, having done all the initial 4 London gigs that took place in the year following the reunion, half a dozen of the amazing anniversary gigs for the deathless Psychocandy, and odds and sods of shows here and there where possible in between, I managed 10 or 11 of the Damage And Joy Tour, spread over the 7 months it’s been on and off in the UK. And what a hell of a ride it’s been. There hasn’t been a bad gig amongst them, each one has been memorable for entirely different reasons. 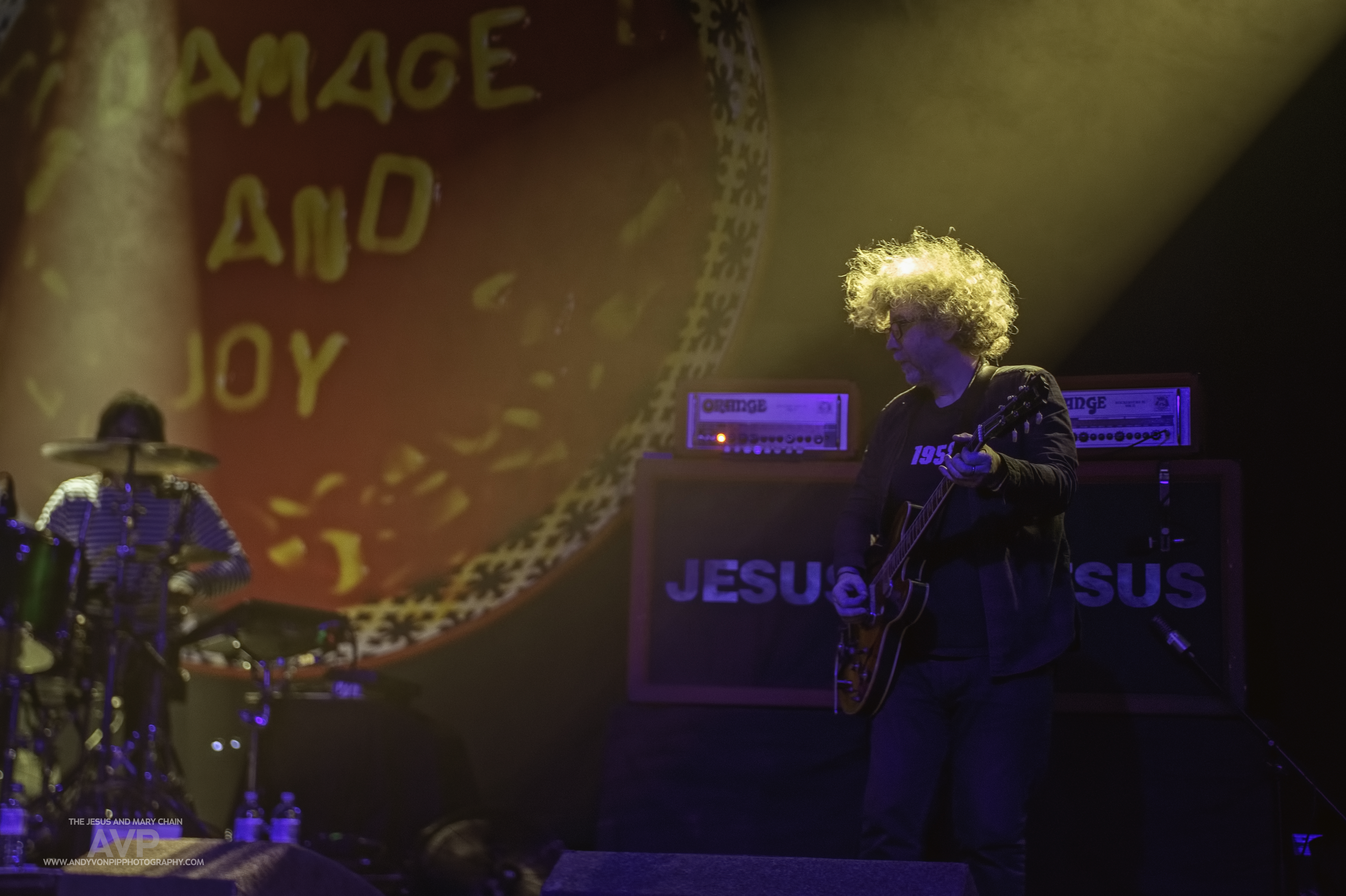 The highlights have been wild and varied, from standing in a near-empty Manchester Academy with the fiendish Von Pip, watching the band tear through a soundcheck version of The Living End that left us grinning at one another like goofy starstruck fanboys at the end of it, to watching Reverence turn over the months into a colossal evil boiling monster of a song, Jim yelling “I wanna die just like J A M C” at Leeds, over the final howling chaos of driving white noise; From seeing them deliver the simple chiming aching beauty of Cherry Came Too, to unleashing the filthy grinding scuzzy rock ‘n’ roll of Snakedriver and Sidewalking. Seeing them verging on being polished and slick and downright professional at the last London gig at the Forum, to being reassured that they were still the Mary Chain of old when, the following night in Liverpool, there were a couple of those cherished moments where Jim just shakes his head, raises a hand, shrugs, and says “STOP” because something’s fucked up. 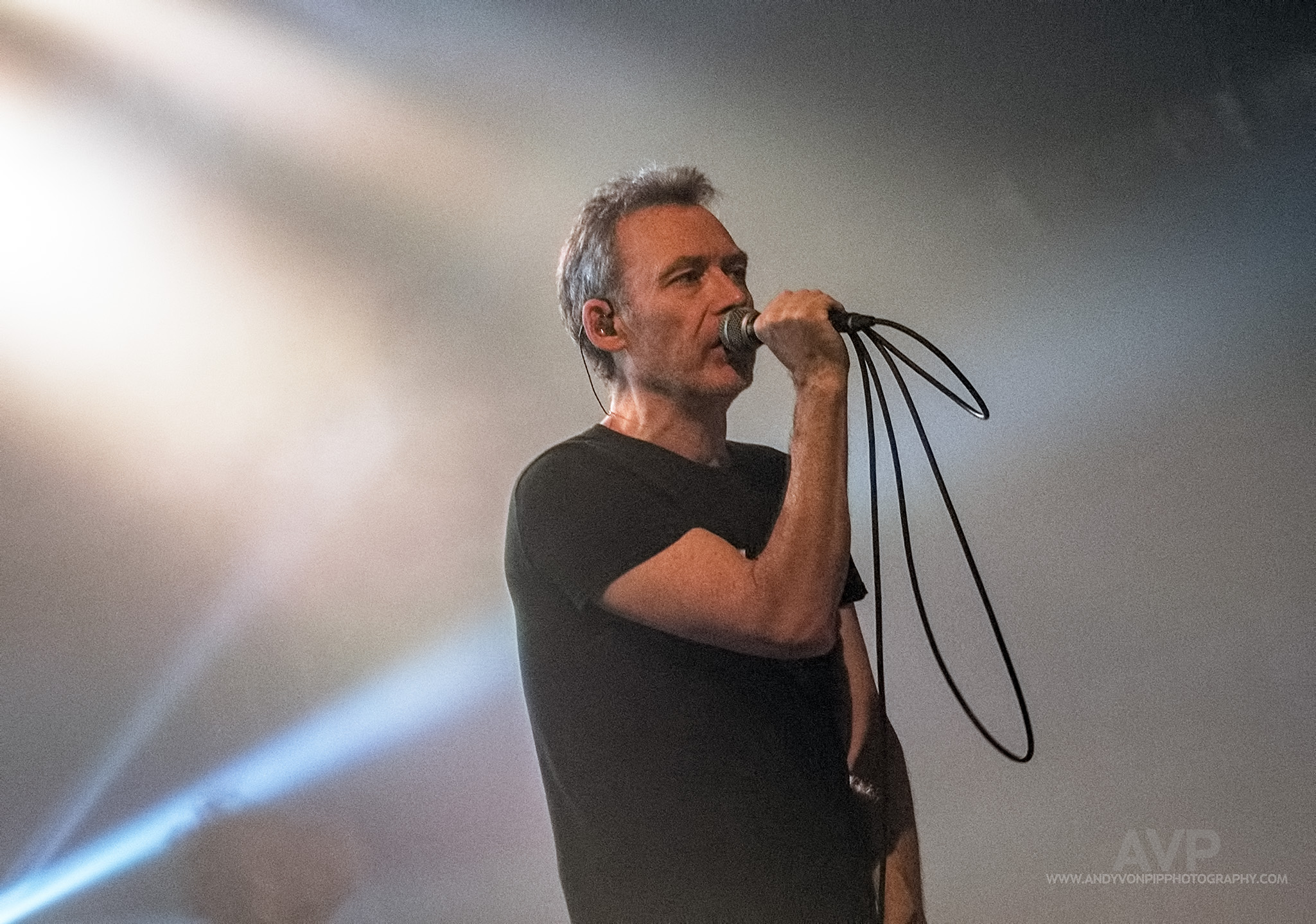 I even had the pleasure of finally, finally, seeing the Mary Chain grace my hometown when they played a set in the hot cramped confines of the Welly Club in Hull. What this new LP and this tour have really hammered home, is that this band is just as relevant, just as necessary as they were in their 80s heyday, and I get the impression from watching them, that they genuinely feel that too. They’re not doing the nostalgia circuit just for old time’s sake, they’re showcasing their stunning history, and simultaneously proving that they still have something to say. The decision to end the sets with War On Peace is perfect; one of the real highlights of the new LP, it is a heart-achingly beautiful song with a sting in its tail, and it sits justifiably alongside almost anything from their past. And for all the fuck-ups, self-deprecating smiles and apologising for the fact that they’re going to play another new song, they are still the most effortlessly cool band on the planet. Jim is looking and sounding great; lean, clean, and a hint of mean, and his voice is in ridiculously good form whether he’s crooning his way through Nine Million Rainy Days, or crouched down, slamming the microphone stand into the stage, yelling above the mayhem of In A Hole. William has chosen not to step up to the microphone any more these days, but he can still wrench sounds from a guitar that nobody else can. He can make it ring out in Some Candy Talking, that perfect moment where Jim just says “talk” and William lets it fly, or he can stand on those pedals and paste sheets of the most searing screaming noise that the human mind can endure. Underpinned by Brian, Mark, and Scott, there is still nothing like them in this world (as the song says!).  And if that lot isn’t enough, they’re actually some of the nicest people you could meet. They, and those around them, are generous with their time and their patience, and on behalf of those of us who got chance to say hello to them on this tour, I would like to say thank you to the band, and to Rachel, Simon, Bernadette, everyone, for the warmth of the welcome, to say nothing of the Pringles, Coke, tea, and merlot!

Once this current haul across the globe ends in November in the USA, I hope the band take a very long and deserved break to relax a bit and unwind, and then I hope they come back and do the whole damn thing again!

The damage has been primarily to the wallet and to my aching old bones, but the joy has been immeasurable. I’ve had an absolute blast.