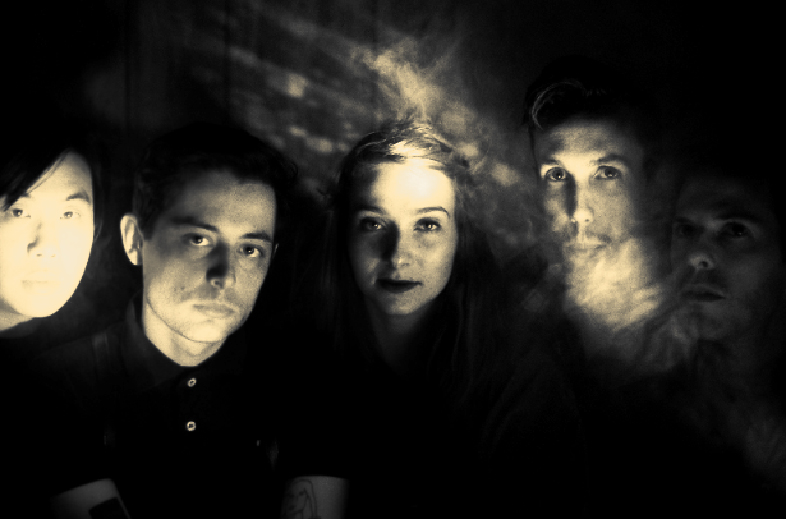 Vancouver’s Mode Moderne seem to like the dark side of life and come across  rather like  The Arcade Fire meets Depeche Mode in a graveyard, which believe me is a good thing. The darkness, which makes Nick Cave seem positively sanguine is all enveloping, like black velvet, which disturbs and yet comforts. Let’s face it if upbeat pop is represented by the unholy union, nay the shrill pop abomination that is  Mike Posner and Cher Lloyd  I’ll direct my feet to the dark side of the street any day of the week!

Following one from  our interview this week with front man Johnny Danger, Two Wounded Birds are giving away a free song below. The band has been gaining fans in high (and low) places for example Brian Wilson contacted Johnny and complimented him on a ‘great sense of melody.’ Debbie Harry watched the band at Camp Bestival and was struck by ‘such a beautiful voice, great songs, great future’, US music industry legend Seymour Stein declared them the ‘best band since The Ramones’ and the ever cerebral, music blog worlds answer to Benny Hill, Andy Von Pip declared they had “the best looking bassist in the history of rock n roll.”  Even Tracy Emin and Spongebob Squarepants have jumped on board. Their new single “Together Forever” has just been released on Moshi Moshi.

“I Think The World of You” By Two Wounded Birds.

Eleanor Friedberger, is one half of Chicago’s The Fiery Furnaces and she releases her debut solo album ‘Last Summer’ on November 14th through Merge Records. The autobiographical lead single from the album ‘My Mistakes’ is  released on November 7th and for some reason it had me musing thus ; what if David Cameron decided to list his ‘mistakes’ using the medium of music ? I mean surely it would break some longstanding record as the longest (and doubtless the shitest) song ever.  Thankfully Eleanor’s much nicer than our beloved Prime Minister and ‘My Mistakes’ is a lovely whimsical introspective tune, which somehow has you yearning for summer again. Recently released stateside, ‘Last Summer’ has received great reviews and is now ready to make its European debut. Eleanor will also be playing a show at well-loved East End boozer, Bethnal Green’s Working Men’s Club on December 1st, accompanied by her full band.

“My Mistakes” by   Eleanor Friedberger.

Who are Flow Machines? Dunno , they don’t do interviews, they haven’t played live and there are no press photos about. Rumours that they are in fact Robson Green and Jerome Flynn pursuing a radically new  musical direction to recapture former ‘glories’ would seem somehwhat wide of the mark as they don’t make people want to rip their own ears off.  They mystery of their identity prevails, so instead lets not pamper lifes complexities, lets instead marvel at the smooth musical leather on the passenger seat..or something.

“Any Other Day” By Flow Machines.

younghusband have a new  EP released  on the Sonic Cathedral label on the 21st of November 2011.

Younghusband’s front man guitarist and keyboard player  Euan Hinshelwood is  also an integral  part of Emmy The Great (the one who isn’t Emma Lee Moss) and if you were expecting poetic introspective acoustic musings you’d be very much mistaken. younghusband provide fuzzed up shoey gazey psych-kraut shimmer pop and sound like they’ve been doing it for years, let’s hope they do!

“Tropic Of Cancer” By Younghusband.

South London Singer-Songwriter Ellie Lawson may be something of a new comer to many UK music fans but she’s spent several years writing and performing in  the US and Amsterdam, she’s also been signed to Atlantic records and appeared on the Ellen DeGeneres show , two things I have yet to do.  However she’s back in Blighty  and her new EP  ‘Lost Without You ‘  is out on 15th November 2011. With another EP planned for next  year  with Communion Records co-founder and producer Ian Grimble (Benjamin Francis Leftwich, Everything But The Girl, Manic Street Preachers) it seems the UK is about to wake up to what the U.S. already know !

Emily Barker, one of the most critically acclaimed female folk artists of recent years  tells us  her excellent album “Almanac” is getting a re release. To celebrate here’s a free download (below). If you recognise Emilys voice chances are you’ve watched Wallander or The Shadow Line , as her songs were used as the theme to both shows. She’s also on tour with Frank Turner.

We mentioned The Finger a few months back and  they have just released a new single from their forthcoming debut album, which is available from all major digital stores and is self released, which is something we always admire.  A melancholy lament which you could also pogo to (unless you have no legs.) Nice!

In A Fragment Of Time by The Finger.

This is the first single release from the forthcoming Lil Daggers debut album, out on Song by Toad Records on 5th December 2011 and we like it! Without sounding like Oz Clarke beating himself off in a vineyard we are getting, shades of The Cramps, hints of the Mary Chain, motorbikes, leather jackets, Marlon Brando and snarly, sleazy rock n roll. All is well in the world.

The Festive Fifty is an annual chart featuring the previous year’s best tracks, as voted for by listeners. Legendary BBC broadcaster John Peel presented the first ever Festive Fifty on Radio 1 back in 1976, and continued to do so until his death in 2004. Radio 1’s One Music show hosted the poll in 2005, before Peel’s former production team asked Dandelion Radio to become the new home of the Festive Fifty from 2006 onwards.