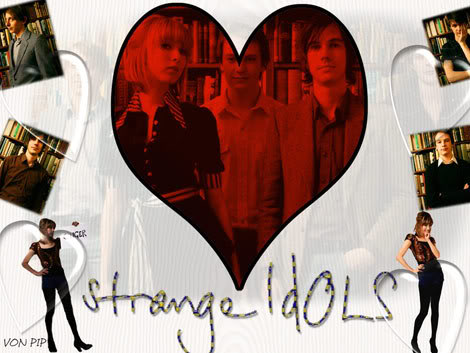 “She’s Gonna Let You Down Again” By Strange Idols

Lets cut to the chase, Strange Idols is a great band . Unlike other reviewers Im not going to wax lyrical about how their sound conjures up Aztec Camera jamming with New Order whilst they whistle “Crash” By The Primitives. I’m certainly not going to say their sound reminds me of pure cloudless azure skys and ice cream kisses. I defiantly won’t say they induce that sense of well being that can only be achieved by drinking your very first sip of ice cold “Bud” whilst simultaneously discovering your lottery numbers have come up trumps and Charlize Theron is asking if she could possibly get you another beer from the fridge and should she wear stockings and heels later ? No I will simply say that Strange Idols is a great band and their music makes me happy. But how do they do it ? What is their magical formula ? It is time to dig a little deeper and discover more about this extremely talented bunch….

VP : Whats the story – How did you come into being?

Strange Idols : Strange Idols formed shortly after Davey, Julian and Laura all moved to London, independently, to go to art school. They immediately bonded over a shared love of music, in particular bands like Hefner, Blur, New Order, Pulp, Beach Boys and many Many others… They were aghast with the current climate of the London post-Libertines music scene and decided to do something to address – if not change – it. So they formed a band. Danny and Frederick joined shortly after and they started writing and gigging across the UK frequently.

VP : What singles have you released so far , and when can we expect an
album ?

Strange Idols : Singles released thus far have been , It’s No Fun! / Old Times on Shady Lane Records October 2006 and She’s Gonna Let You Down Again / Berlin on Modern Pop Records April 2007. A new single He’s Out Looking For Love will be released this November (2007)

VP: Are you planning a tour in light of the forthcoming single ?

Strange Idols : We will be expecting to play across the country around Oct / Nov to promote the new single. Check www.myspace/strangeidols for updates and if we will be playing near you! So far confirmed is Lund, Sweden 12th Oct, Shepherd Bush Empire 3rd Nov and two dates in Spain in January.

VP: Who would you say your musical influences are ?

Strange Idols :Many and varied. But I think the bands we betray our influences to the most are New Order, Aztec Camera, Blur… Certainly in terms of writing and arranging quintessential English pop songs.

VP: Who is strange and who is idle ?
Strange Idols : All of us can be strange in our affectations and idiosyncrasies from time to time. I don’t think the others will thank me for incriminating any of them personally by leaking secrets or stories! None of us are idle, we simply haven’t had time to be of late!

VP: Glastonbury ? Has it become too corporate or is it still THE festival to
be seen at and to play?

Strange Idols : There does seem to be an issue with Glastonbury being turned into a corporate, mainstream, no longer ‘festival for festival’s sake’. We played End of the Road festival last week which only, purposefully as a capacity for 5000 people, and the whole weekend was amazing. All the bands were great, the landscape and environment where beautiful without being peppered with mobile phone billboard sized adverts and what not and the whole thing just seemed so effortlessly lovely and efficient. I’m sure Glastonbury will continue to attract the volume of people it does, simple because they (the organisers) want to ‘think big’ and I guess the money to fund that has to come from somewhere, hence the corporate nature of the festival. We haven’t played there yet, but of course we wouldn’t turn it down, for the sake of politics!
ha.

VP: Manufactured bands what do you think of them? Spawn of Satan or jolly
good fun?

Strange Idols : Absolute crap most of it. It depends what you consider manufactured to mean? I think even bands with integrity and sincerity who do it off their own back tend to ‘manufacture’ themselves in some ways. Even if they’re not conscious of it. But things like Steps, S Club 7 – utter crap. But also it doesn’t kill anybody so isn’t worth getting too worked up over their existence. Just avoid it like you would a dog poo in the street.

Strange Idols: Neither. Refer to above Q&A…( Bah I was just sharpening my axe…!)

VP: Pop and Politics should they be mixed ?

Strange Idols: Yes, they have been in the past very very well. Billy Bragg. Dylan. The Clash. Rage Against The Machine. Manic Street Preachers… Music is a vehicle for expressing what you think about something. A voice, as any art form of expression is. But if people really believe that a pop song will change the world under a political spectrum then that is laboring under a delusion of grandeur and is futile. But apathy is no better either.

VP: The Richard Dawkins Delusion – Is he a visionary or a prize plumb with a  God Complex ?

Strange Idols: I have no idea who he is?… ( you ain’t missing much )

VP: Five words that sum up your philosophy ?

“It’s No Fun” By Strange Idols