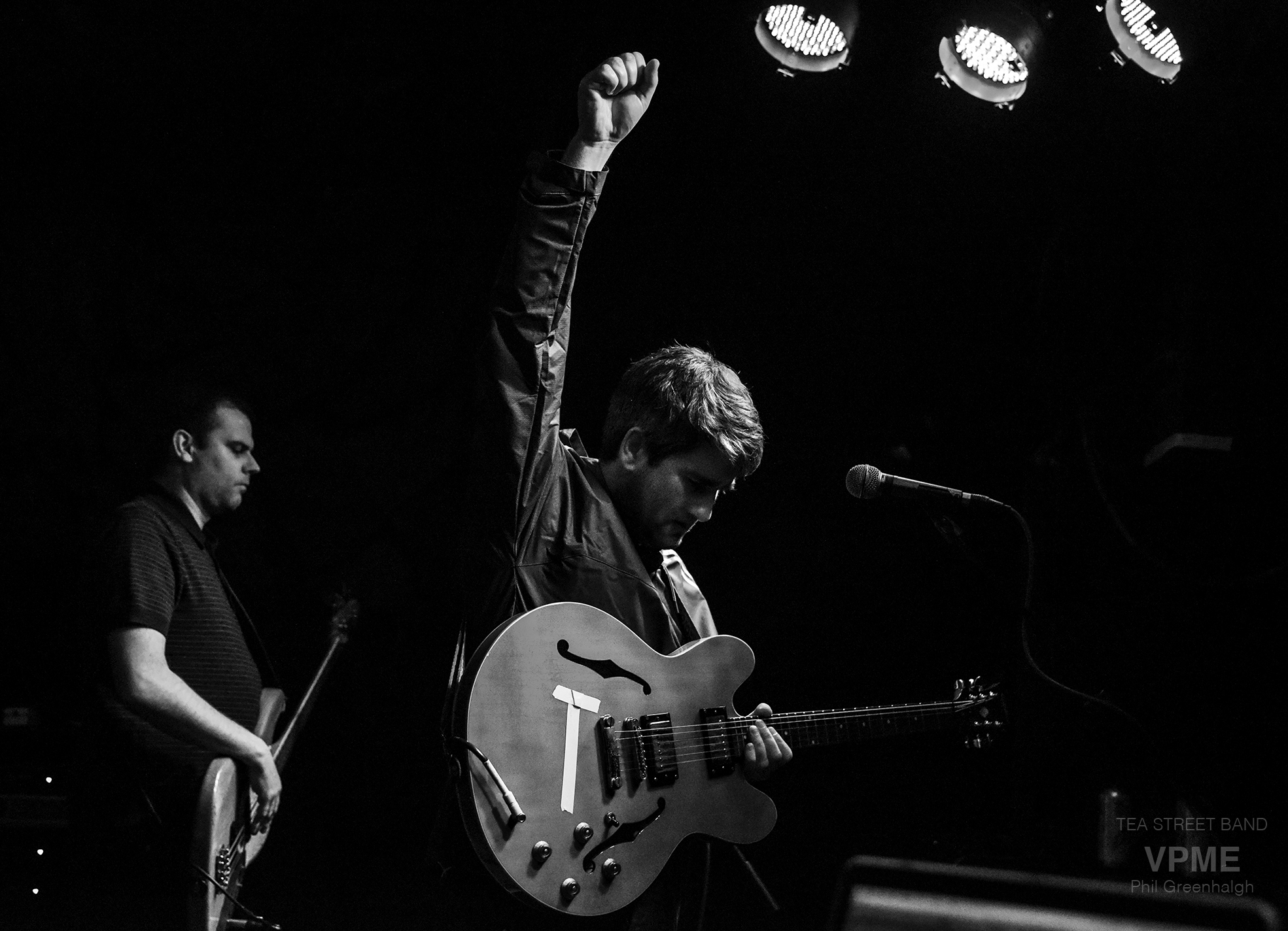 To celebrate Independent venue week Liverpool’s The Tea Street Band returned to the scene of their first gig, the Zanzibar in the heart of the Saturday night crowd in Liverpool’s ropewalks

It is not without irony,  that the venue for a gig highlighting Independent music venues is but a stone’s throw away from the building site that once housed the iconic Kazimier Club and the recently repurposed Mello Mello.

The significance of these lost venues is particularly pertinent in this rapidly changing landscape and on a night specifically intended to promote the value (and plight?) of creative spaces.

Independent, original grass roots music has always survived and thrived on the physical, and metaphorical, periphery of city centres. The loss of the much-loved Kazimier has been well documented and we can, of course, celebrate its ‘in-spirit’ reincarnation at the Invisible Wind Factory on the dock road. Liverpool can hold up the Baltic triangle venues as a testament to grasping the opportunity of underused spaces on the edge of town. Even here we hear of the developers closing in, venues under threat, creativity forced another street further.

But true indie, main-drag venues in the hub of the weekend thoroughfare remain critically important to the fabric of the city. The gig goer spilling out into the same street as the clubber, the venue switching to DJ club mode after the bands have packed up. A symbiotic crossover that keeps original music as part of the cultural make up. A blurring of the edges.

This is the second Saturday running that we’ve attended a sell-out gig a the Zanzibar, and if anyone fell into the venue unawares of what to expect then they were met with a pretty eclectic bill.

Kicking off with a stripped-down set from David Barnicle, (sans the full ‘mystery force’), at first it looked like a bit of a mismatch of artists on the bill. To pitch a bare acoustic set on an audience here for more of a bouncing electro-rock-pop headliner was looking like a brave or misguided decision. A quiet acoustic set can allow the uninterested to settle into their unappreciative chatter. Much, as it transpired, to their loss. 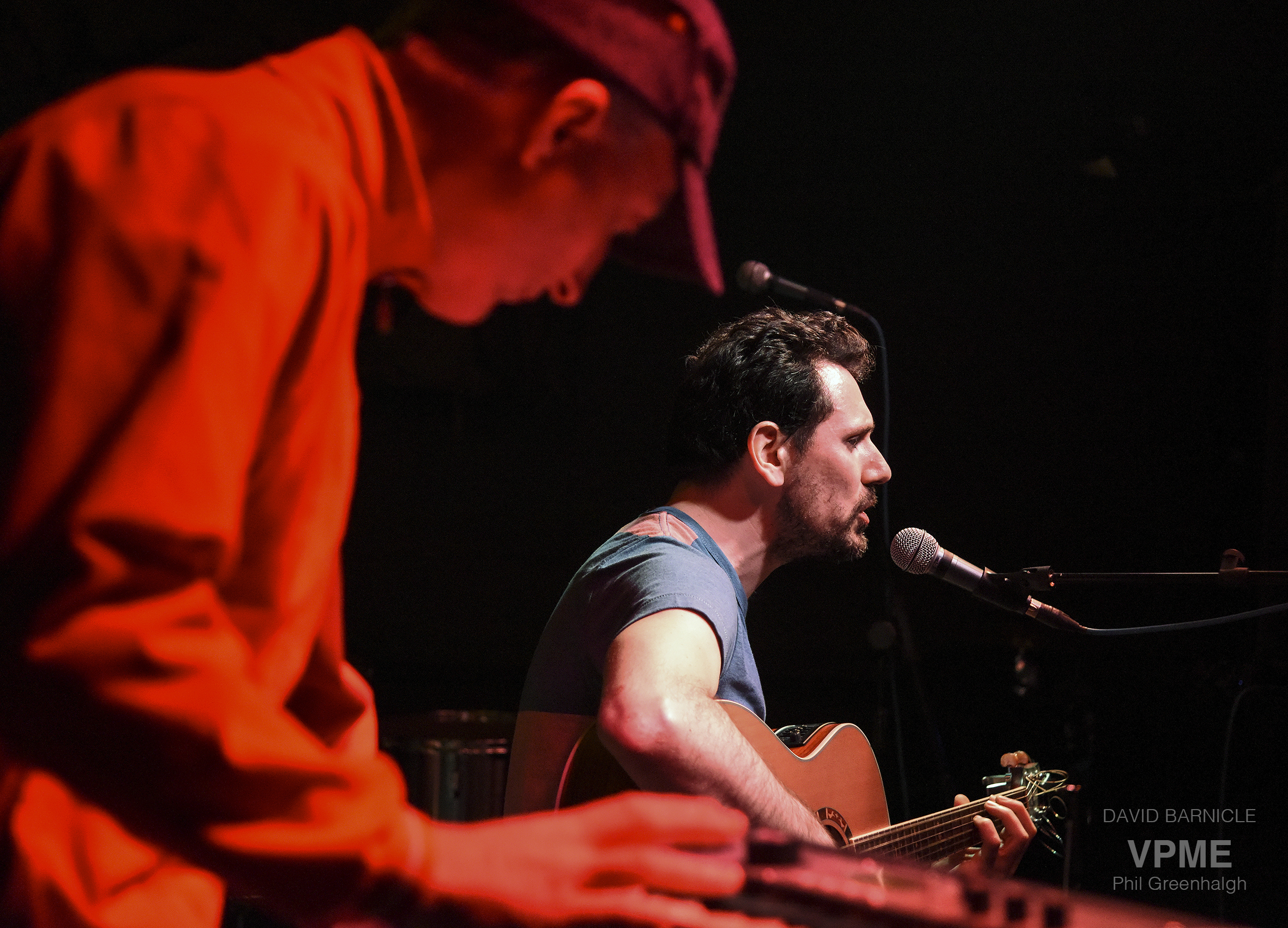 From the second song, David was joined by a haunting phasey synth which added a massive dimension to the atmosphere of the performance. The song ‘Human Sacrifice’ was a triumph of songcraft and beauty and the stripped down version of the more psychy ‘Twin Star’ reminiscent of Steve Mason. Those that stood backs to stage, deep in loud conversation missed a rare treat, that took a bit of concentration to appreciate, but well worth the effort.

Finishing with a nod to the more dance roots of the headliner, and joined by Tea Street drummer Dominic for a cheeky cheesy cover of Corona’s ‘Rhythm of the Night’, didn’t quite tie the set to the night, but rounded off a performance that would have you keeping an eye out a more fitting billing in the future.

A change of pace for the next band on stage, SCARLET launched into a short set of jangle shred indie pop from last year’s debut album ‘Effigy’. 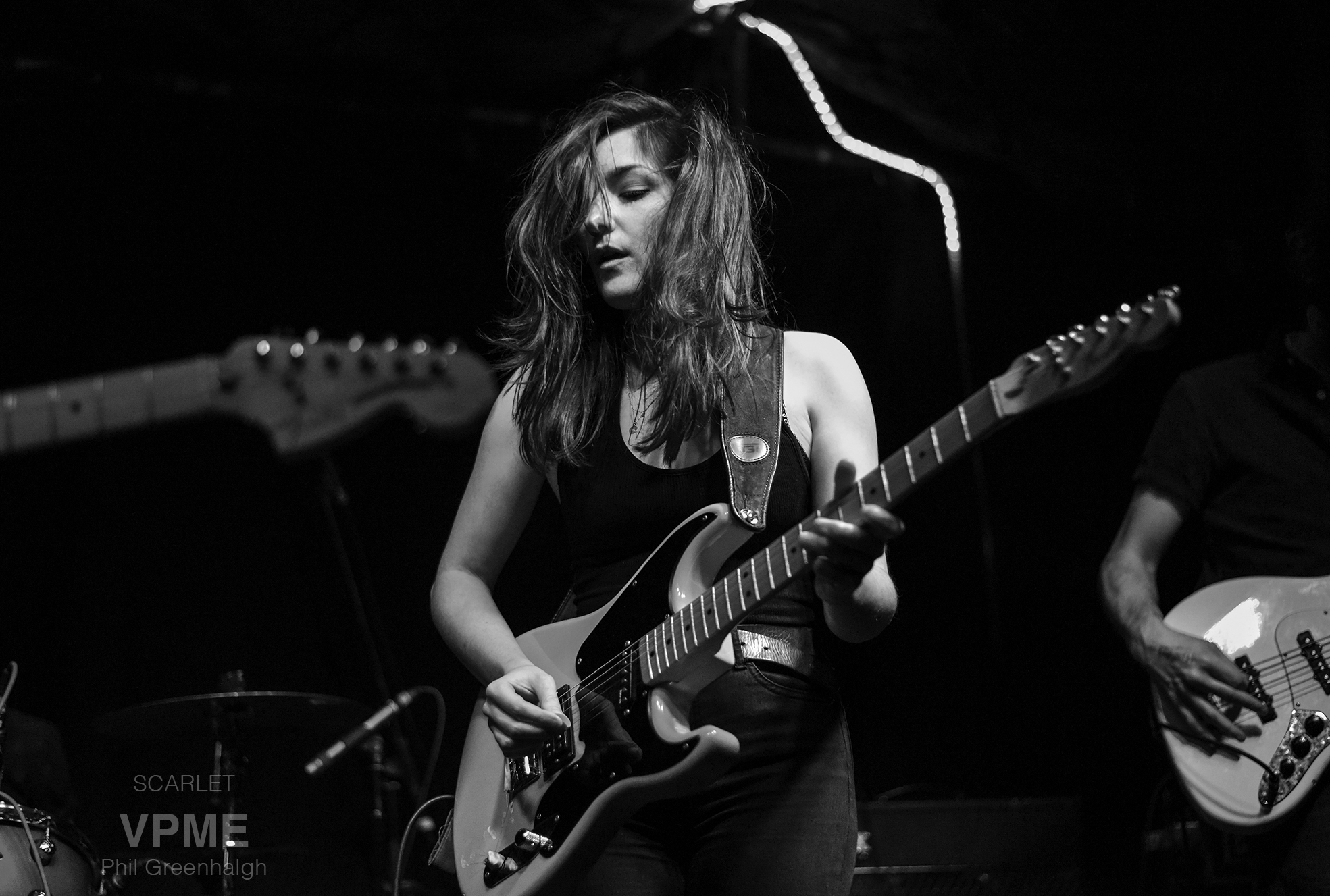 It wasn’t evident from the performance that this was the first gig for their new drummer, who brought a livewire manic presence to the stage. Singer Jessie has ironed out some of the rougher edges on early performances and is really delivering the vocal range needed to pack the live punch needed for their infectious songs. This was probably one of their most flawless and enjoyable performances of late and was clearly enjoyed by the band and audience alike. Guitarist Adam Cunliffe looked like he didn’t want the set to end, carrying on after the rest of the band had decided to pack up.

Third on the night were electro-dance soul-pop duo HALEM. This is marketable, mainstream well-structured pop that the crowd in the nearby ropewalks bars would more than appreciate. LIPA graduate Katy Bryson has the vocal delivery that would have Tom Jones and that excitable Willy-Am fella spinning their judge’s chairs on the Voice after the first verse. 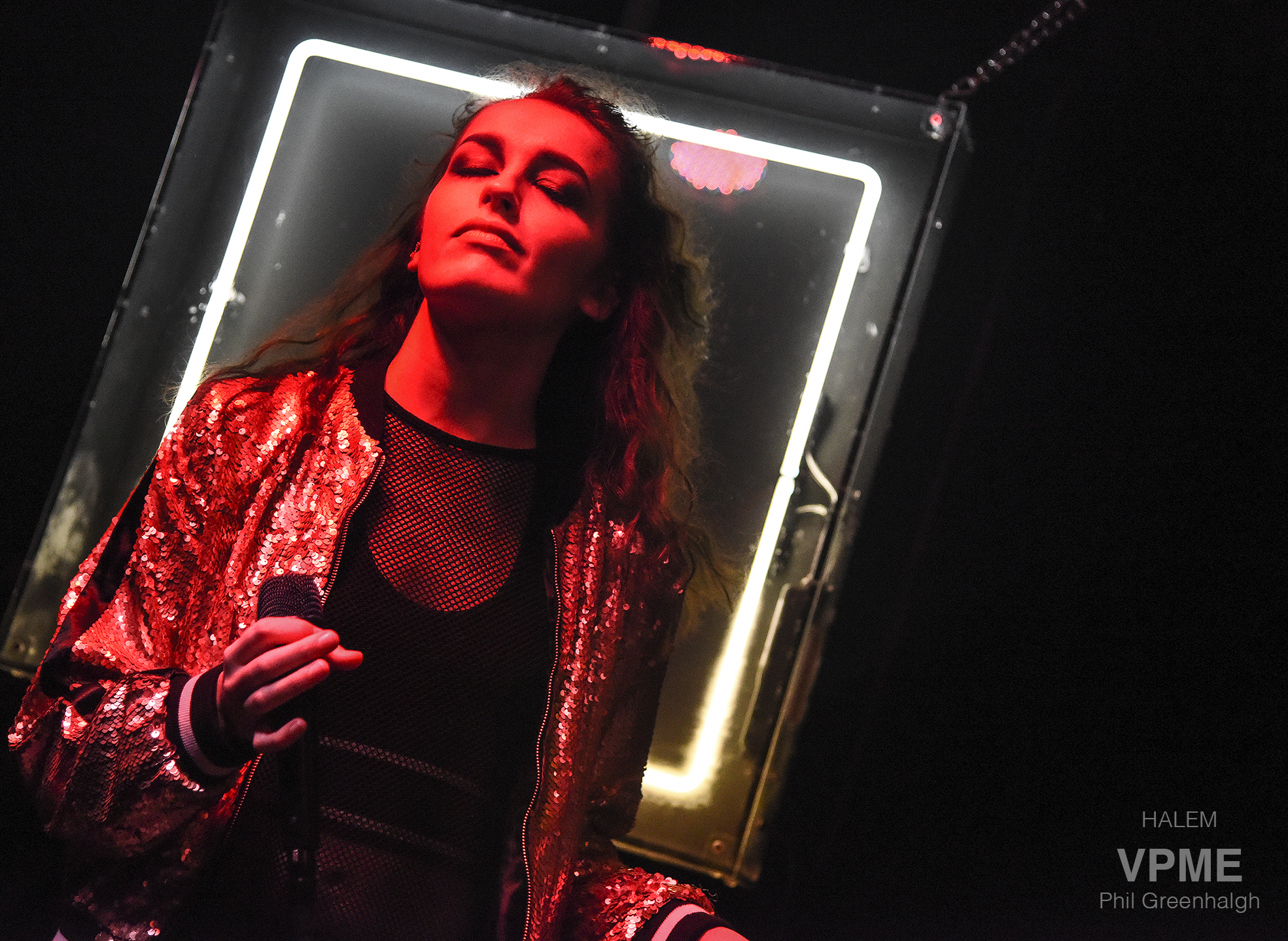 A sax player stood looking like he was going to join in at any minute but joined for only one song near the end. And to be fair it added a degree of depth to the highly polished and sequenced electro backing added by Reece Cairns’ one man band approach to keys and electronic drums. In truth, this looks like a band that could benefit from a much bigger backing sound, which could be achieved without losing their integrity as a solid front-duo. Katy has a voice that is much more refined and layered than you’d expect from such tender years, there is a real soulful element and even an almost intangible twist of sunshine reggae. Now if someone could just spin their chair then stardom beckons. 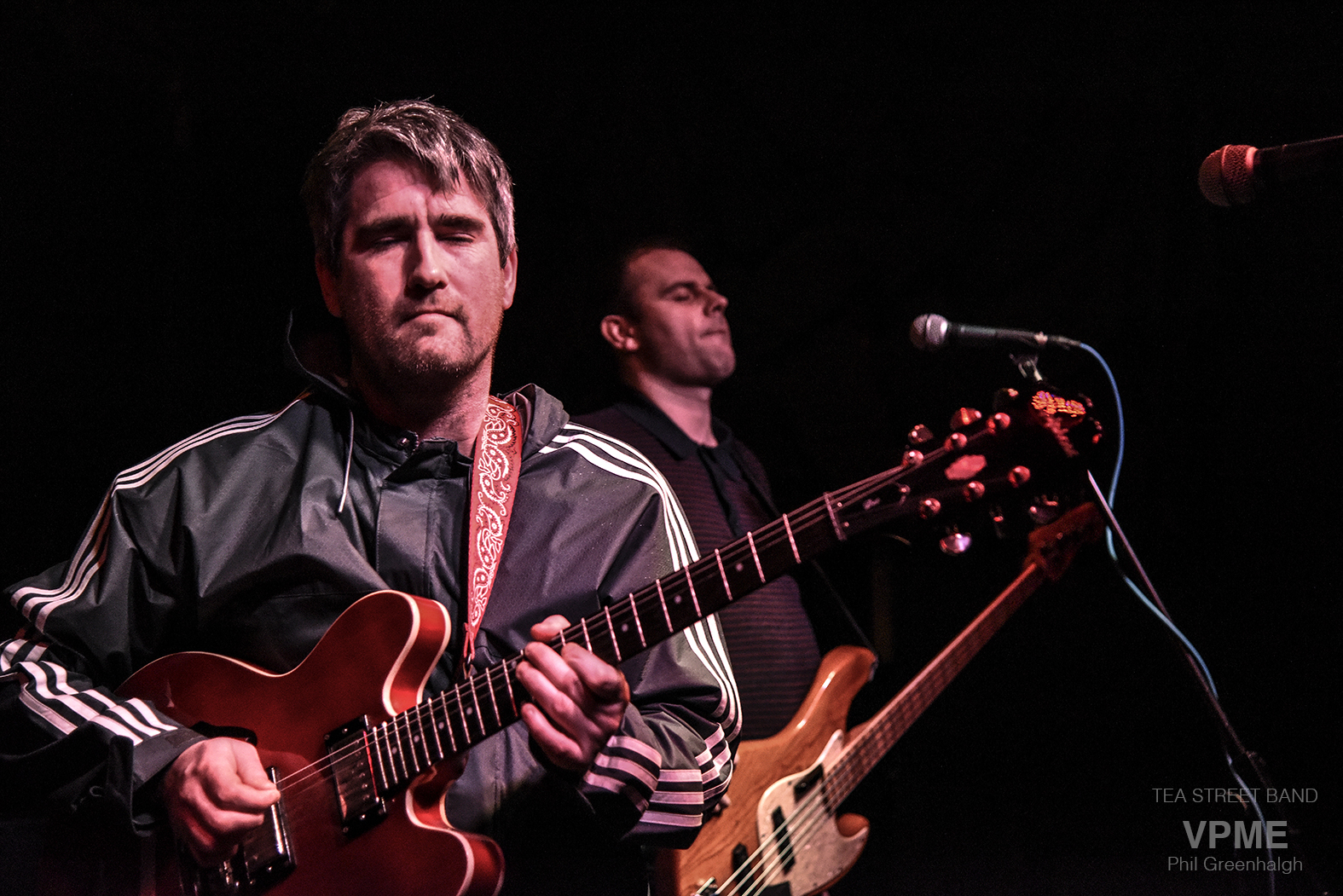 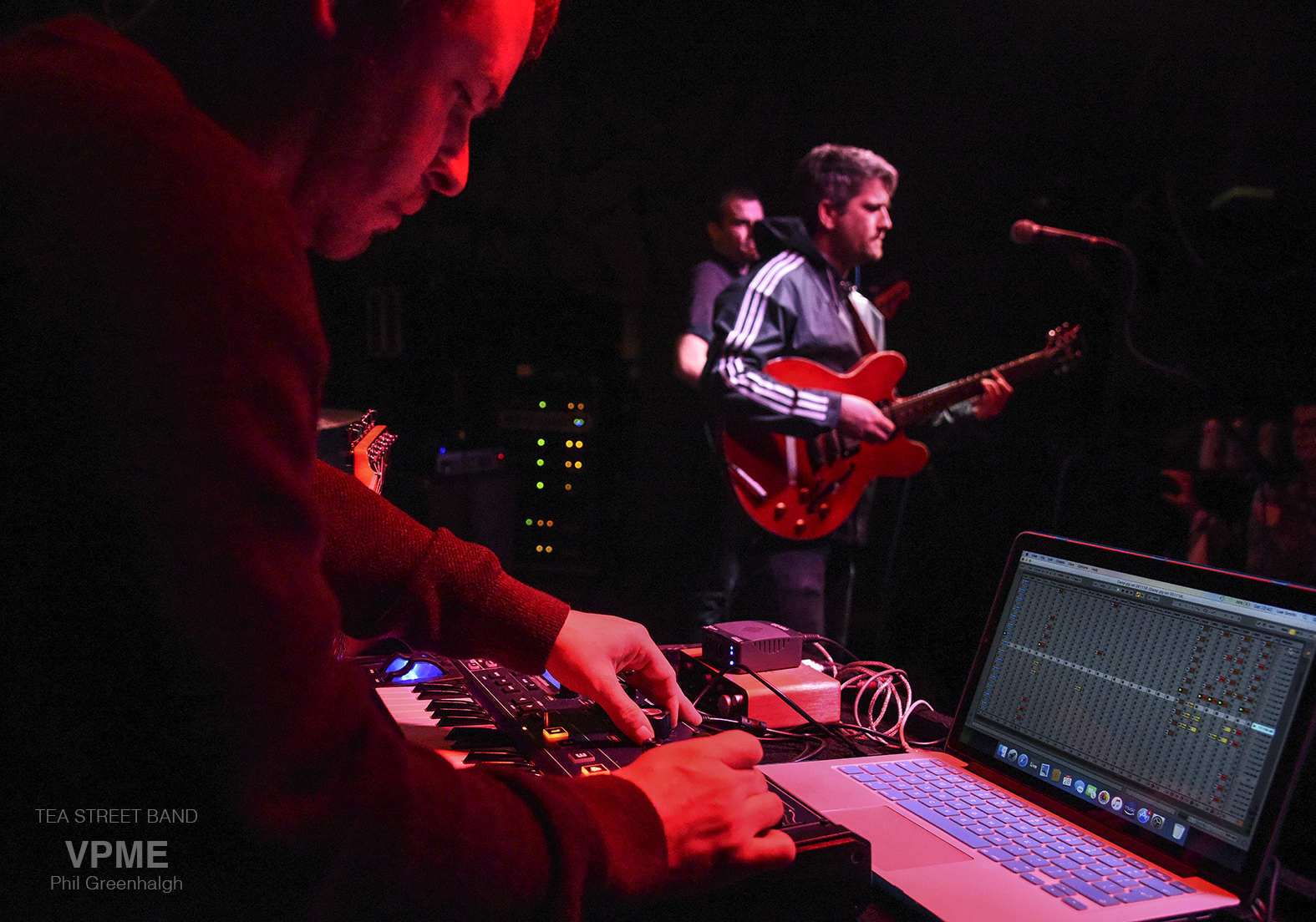 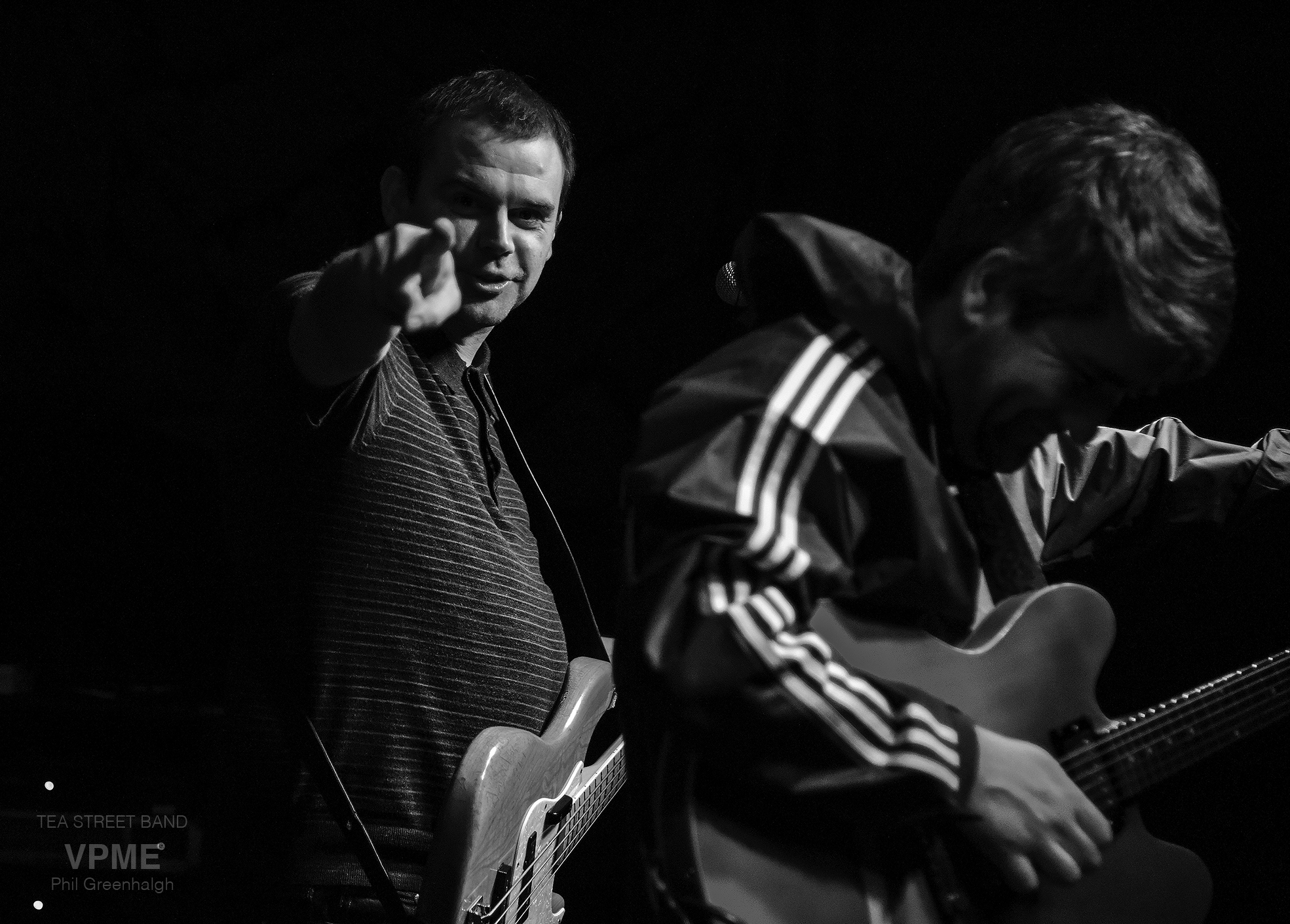 It’s time now to trot out the usual epithets for headliners The Tea Street band; blissed out Balearic, the 80s infused euphoric summer dreams adorned with three stripes, is-right cool as fuck scally chic. But tonight, the usual descriptors are just not enough….

The expected favourites from previous releases ‘Disco Light’s and ‘PFTO’ were, of course, massive crowd pleasers at the now full-to-capacity Zanzibar, But surprisingly, stand out tracks on the night came bit out of left field with some of their new as-yet-unreleased material.

Specifically; ‘Sacre Couer’ which was more reminiscent of early 80s New Order, and ‘Only Love (Is left alive)’ which reworked the Rutger Hauers ‘Like Tears In Rain’ adlib into a hypnotic anthemic choral refrain, really pricked up the ears for a bit of a ‘hang about… what’s this I’m hearing’ moment? Scheduled for release later this year, if not a complete sea change for The Tea Street Band, these songs certainly represent a supremely confident shift in direction – the sequenced electro beat is still there, but gives way to a more up front indie guitar sound, it’s like a fusion of their own past and present. And it works. It works in a ‘where can I hear this again… soon’ way. An anticipation of something is about to happen way.

Alas, technical issues prevented a much expected and deserved encore, but respect for the Tea Street Band to pay homage to where it all started for them, a place that in a just world, will survive to be the place to launch many a band in the future.

Words and Photos By Phil Greenhalgh