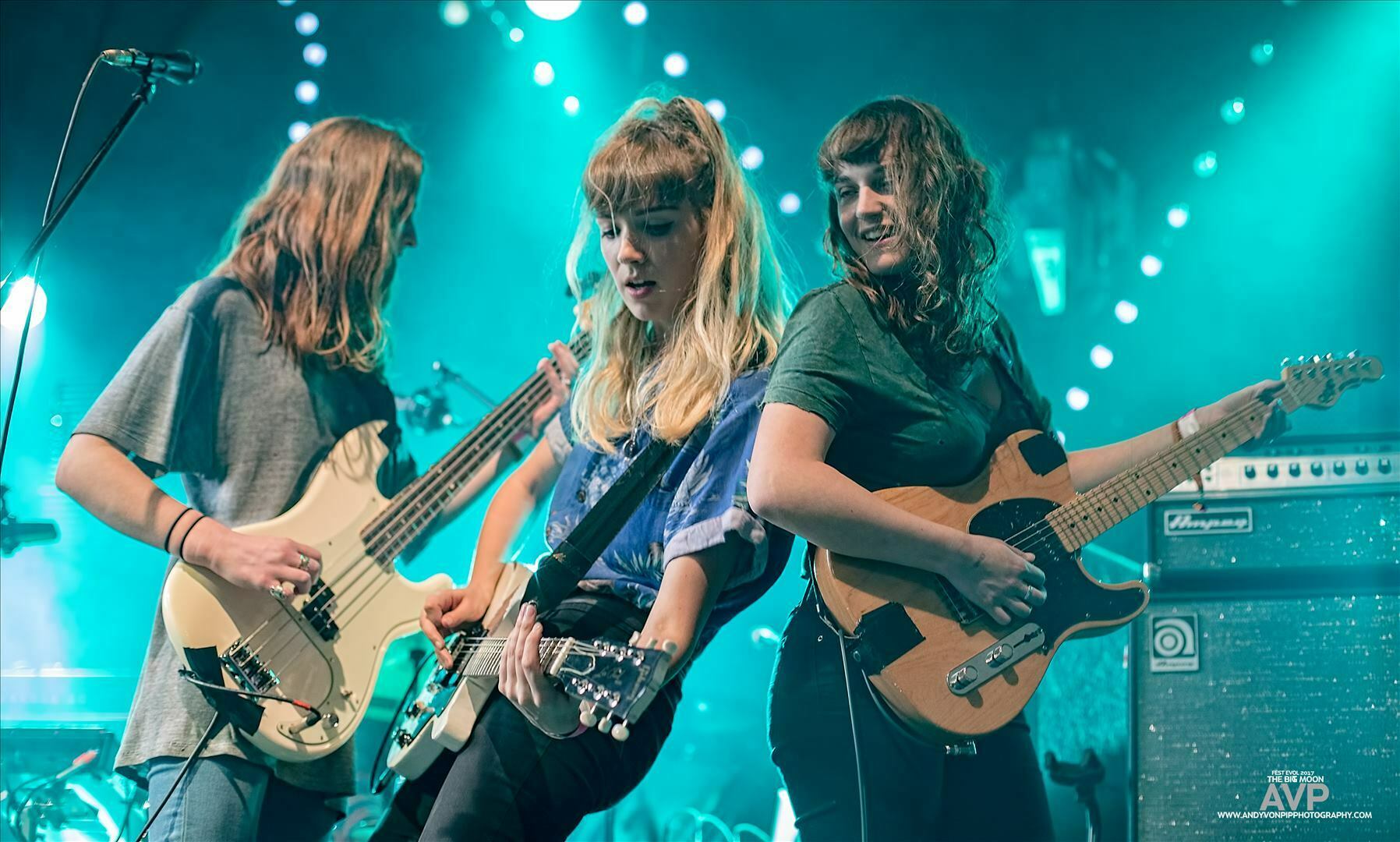 The Big Moon Live at The Magnet Liverpool

Juliette Jackson, the Amazonian frontwoman of The Big Moon has grown an inch.  The doctor told her.  She’s 6ft 1.  A whole inch taller than she thought she was.  I am standing directly underneath her at the basement stage at Magnet.  Behind me is a full to capacity and jumping crowd that has multiplied since they last played here to 20 people back in 2015.  The surface of The Big Moon is starting to become visible and these girls aren’t even in their full first phase yet.  Mercury and it’s prize list of nominees, however, is well aware of The Big Moon’s position as one of British music’s brightest propositions.  The show was opened by Liverpool’s The Mysterines.  Their song ‘bet your pretty face opens doors’ pretty much opened a sonic vortex of grunge with frontwoman Lia Metcalfe bellowing the refrain and George Favager narrating our nerve strings on guitar; they come highly recommended.

Earlier that day back on planet earth Juliette Jackson took the train into Liverpool.  She relayed to us the story in which she sat opposite a man who was consuming a ham sandwich, a bottle of wine and Mini Cheddars: ‘he was eating the Mini Cheddars and sucking them until they turned into mush.  Every now and then he would stick his tongue out and you would see bits of Mini Cheddars on his tongue… Basically, he was a disgusting man and I don’t know what made me think of him’.

What it makes me think of is Louise Wener’s lyrics to the Sleeper song Hunch and the kitchen sink poetics that defined a lot of Britpop.  This is only because it’s coming out of Juliette’s mouth – a mouth that intones with the same truncated Estuary English phonetics as Wener and some of the other kids from Cool Britannia.  The Big Moon possess similar sweet, swirling guitar riffs to Sleeper, but the narrative structures of The Big Moon’s lyrics are much lighter, less dense and more effervescent.  They are the girls next door to an early Blur that aren’t going to keep the noise down.  It is a good job they’ve been booked into the basement at Magnet as this year’s Freshers – along with the more seasoned Liverpool gig-goers-  are doing a good job of jump-smashing the floorboards in while Juliette swings herself off the Magnet stage rafters with a wicked grin.

Scouse fangirls on the front row can be heard saying ‘eeeeee’ with colloquial compassion to the Mini Cheddar tale.  This is a feel-good crowd and The Big Moon connect to them with ease, playing to cameras and high fiving the ‘Babes’ on the front row.  When you’re all collectively reaching ‘Ooo’ shaped falsetto notes that usually, soundtrack sugar rushes how could there not be a good atmosphere?  Juliette Jackson’s undeniable position as a powerhouse frontwoman cannot detract from the unity with which The Big Moon sync together. They often appear in a cartoon-like scrabble of 36 inch inside legs from within frayed denim shorts.  ‘Yas Queens’ can be heard coming from the crowd in between the setlist that opens with Silent Movie Susie.  The set list that followed gave us NWY, Happy New Year, The Road, The End, Pull the Other One, Love in the 4th Dimension, Zeds, Eureka Moment Hold This, Total Eclipse of the Heart, Something Beautiful, Cupid, Formidable, Bonfire and Sucker.

Total Eclipse of the Heart is a Bonnie Tyler cover ‘Turn around bright eyes’ was sung with gusto from the hundreds-strong grunge glamour loving crowd. The Big Moon were surprised with Liverpool’s full grasp of the lyrics: ‘you even know the weird bits about living in a powder keg and giving off sparks’.

‘Please play Cupid’ their most popular track is demanded from girls that smell like teen spirit.  The Big Moon deliver it three songs from the end and it is their most satisfying lyrical sing-a-long with a helter-skelter hook line.  Quiet-loud-quiet they get it perfectly right, isolated lyrics on a three-chord lull before the big bang. The thing about having a very popular single is the ability to continue to entertain beyond that and The Big Moon do it.  Juliette’s crowd invasion and her serenade of some unsuspecting man in the crowd to Bonfire was worth the ticket as was the girl’s triple threat axe-wielding performances to Sucker that ended the evening.  As the rhythm section bounced and head-banged back to back Fern smashed the drums in a Get Inuit t-shirt (one of their support bands) it read ‘I’m wasting my life’ the irony of the slogan is growing at the same rate as her crowd.  This is a band with legs. 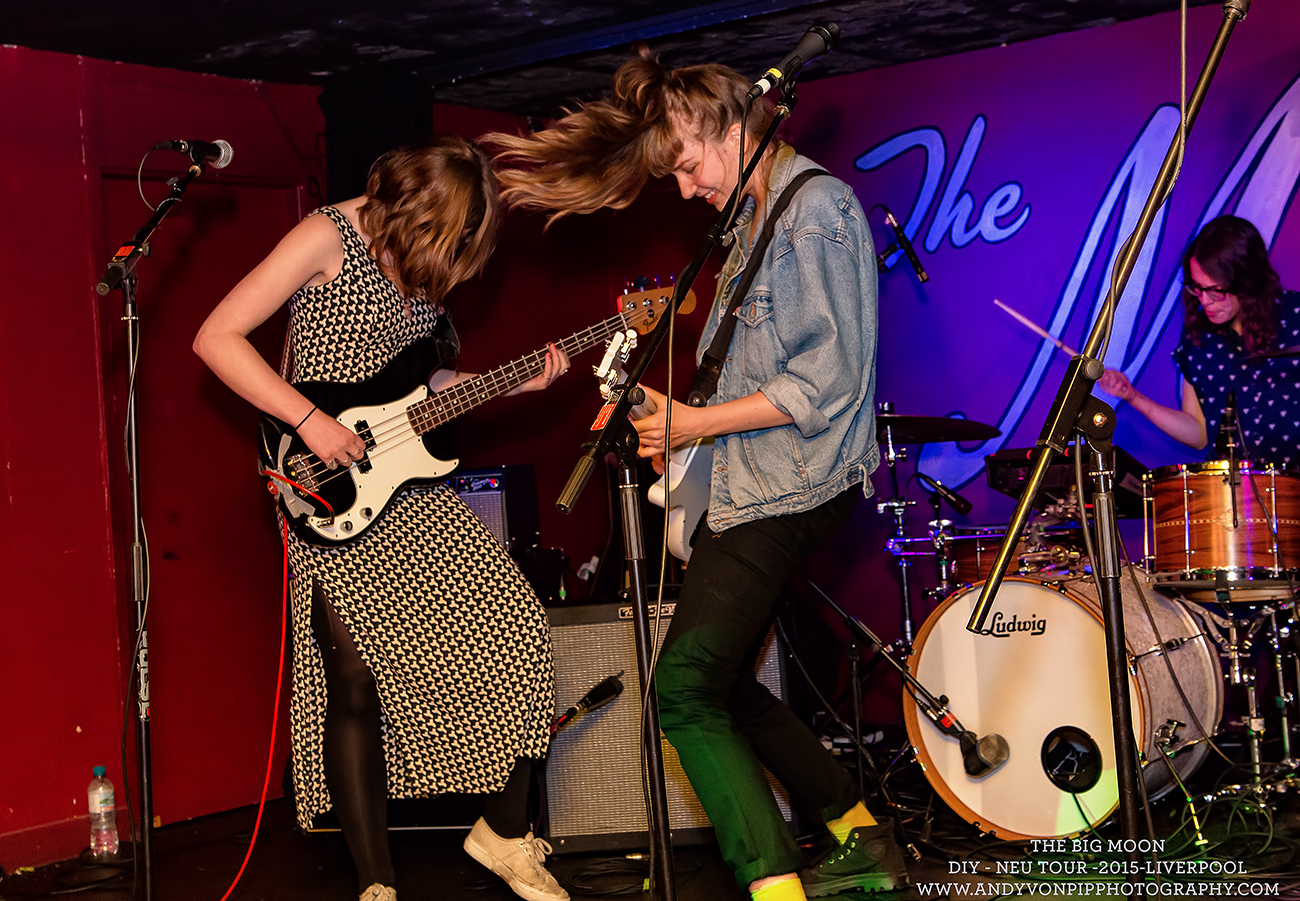