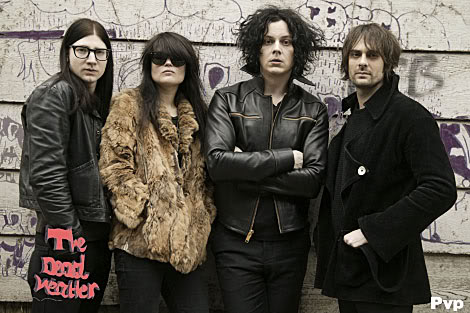 Saying you  don’t particularly ‘ get’ The White Stripes usually elicits the same  sort of incredulity and anger normally reserved for somebody who decides to drop their  trousers and shout “Hallelujah!” whilst receiving Holy Communion at church on Sunday.  But the truth is I never really had much time for The White Stripes, Ok so “Hotel Yorba” had a certain rough-hewn rustic knock about charm, but for some reason they reminded me of  Timbuk 3 (anyone remember them! ) and I never quite managed to sever that ludicrous mental connection. As the popular music press salivated over each new White Stripes release I would offer the same indifferent shrug I normally reserved for the latest Foo Fighters tune. After hearing Mr White’s rather woefully misjudged James Bond /Alicia Keys rock-warble hybrid I felt a shameful sense of schadenfreude “not quite the godhead you’re often made out to be eh Jacky boy ?” I thought. However despite my resistance to all things JW I could appreciate that he is an amazing, innovative guitarist but I believed that the premature anointing of Mr W as some sort of musical deity was somewhat over the top, but hey, ho, I didn’t lose much sleep over it and I’m damn sure Jack didn’t, ;) – I didn’t dislike The White Stripes they just kinda washed over me and I concluded that some bands you just don’t ‘get’. And so The White Stripes existed -I didn’t bother them, they didn’t bother me, everybody was happy. Then along came The Raconteurs, and I admit I was initially seduced by ‘Steady As She Goes’ and we briefly held hands but when I listened to the full album I realised we were never likely to consummate our musical relationship and so it seemed that another Jack White project was  to pass me by … I must admit I did feel I was missing out, but couldn’t quite work out how or in what sense??…..

But now Jacks really gone and upset my apple cart …he’s only gone and produced a sleazy slice of rock n’ roll that even I could not fail to be moved by.  His latest single  “I  Cut Like a Buffalo” from yet another of his ever expanding side projects, The Dead Weather, is the song that really changed everything for me,  it became a musical jemmy that opened a mind that was seemingly forever hermetically sealed to  all things Jack White… after  listening to this track everything slowly started  fall in to place, suddenly I started to “get” the Dead Weather and it proved “I don’t know Jack!”

Alongside Jack, The Dead Weather’s dirge rock is the product of Dean Fertita (Queens Of The Stone Age),  “Little” Jack Lawrence (The Raconteurs, The Greenhornes) and Alison Mosshart (The Kills)  “I Cut Like  Buaffalo” is their latest musical calling card from  their debut album  ‘Horehound’. It’s a track which perfectly captures their gritty rock & dirty blues sound. It’s a dark, organ grinding number containing a Stranglers inspired intro which fuses “Peaches” with “Hanging Around” before  crossing over into Clash territory whilst managing to  retain that whiskey sodden blues quality that sounds utterly authentic, natural  and completely uncontrived. Apparently The Dead Weather formed as the result of a Raconteurs jam session and it kind of has that rough and ready vibe, a raw untreated feel, like it was recorded in a New Orleans crack house on Halloween.  Visceral guitars and juddering beats circle Jack and Alison’s vocals like a pack of hungry wolves as he snarls “Is that you chokin’?/ Or are you just jokin’? I’ve no idea what “Cuts Like A Buffalo” actually means, some say it’s a euphemism for death, others that it’s a slightly unpleasant term for bleeding during sexual congress(nice), but I prefer to think of it as somebody who is thick-skinned -difficult to upset, hurt, or insult-tough, a bit like Mr T.  It’s a tune that has been playing around in my head for weeks, and is a song destined to one day join the canonised classics. It may well also be the catalyst which inspires me to revisit the White Stripes in the hope that the penny will finally drop …..8/10