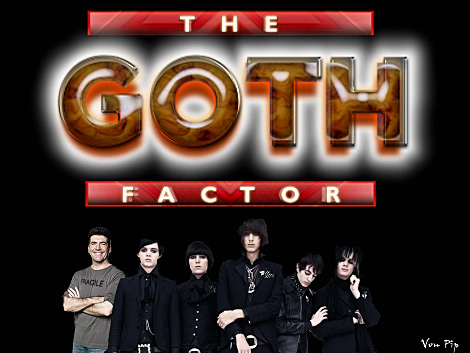 I was genuinely rather looking forward to hearing The Horrors latest album ‘Skying’ based on the lead single ‘Still Life’,a rather wonderful anthemic slice of dark 80’s synth pop. I thought, finally, at last, The Horrors may deliver and justify in some way, the obsequious and quite baffling hype their output has thus far generated.  As I listened to ‘Skying’  it soon became apparent that, as ever, The Horrors have not produced a glittering, dark work of pop noir genius but the usual  dull insipid, stylised grave robbing piffle we have come to expect. It really is a complete cacophony of cock.

Rather like Grawp, ( Hagrid’s simple minded brother in Harry Potter) each song lumbers about haplessly searching for  direction, almost finds it and then collapses on its arse in an undignified heap. After being harrowed to the very core of my being  I decided to peruse a number of online reviews,  I mean surely they too would share my view. It was with abject incredulity that I sat open mouthed as five star review followed five star review!!  Could this really be the same album ? Had I been sent a different recording  in error? Produced by some sort of comedy Bauhaus tribute band in a tin bath?  The very same album  that critics have been positively w*nking themselves into a frenzy over, hailing  ‘Skying’  as some sort of defining moment in the history of rock n roll ? Indeed I almost spat out my tea when the NME boldly stated, sans punchline,  that the Horrors are now ‘the most important band of their generation’ I needed a second opinion; and there was only one man up to the job…

The album was dispatched to the desolate, windswept Yorkshire Moors, or more precisely to ‘Darklands Manor’ home to Richard The Goth, our specialist on all things undead…I mean  maybe I was wrong, maybe ‘Skying’ is in fact an unmitigated masterpiece and I have taken leave of my senses? …. What would Richard make of it …..

CLAAAANG…. the massive ornate brass door-knocker resounds against the 13th century oak cathedral door that guards the entrance to Darklands Manor. CLAAAAAANG… who on earth can it be at this hour of the night?   CLAAAAAANG…. Jesus, they’re making enough noise to wake the dead!  CLAAAAAAANG…. all right, all right I’m coming!.. Hmm, strange, nobody there, just a brown paper parcel left on the gravel drive outside the main portcullis. It’s from the Pipster, whatever can it be?  I retreat to the main drawing room and open it… it contains a gramophone record and a small white carte de visite, hastily inscribed in a trembling hand. Obviously written under some conditions of great distress and trauma, in shaky letters it says “I simply can’t face it. You’ll have to do it, old bean. Love, VP“…. Aw, crap! It’s the new Horrors LP! I’d read somewhere that it was that time of the year again, when assorted members of the press and online community tell us that this sorriest of bands has once again reinvented itself and delivered a stunning artistic meisterwerk. Well, we didn’t fall for it the last two times, so will it be third time lucky for Faris and his friends? Read on, good people, and find out.

In a word, no! I could go all around the houses and build up to it, but sod it, let’s just cut to the chase. For some reason, this clueless mob have an almost invincible “Emperor’s New Clothes” aura about them and in print and on the net otherwise sane people seem to be falling over one another to extol the greatness of “Skying”, their latest offering. Once again, it has been proclaimed as a bold daring sweeping statement, the sound of a great band once again finding a new and enthralling voice with which to captivate us. And, once again, it’s nothing of the sort. I am intrigued by the fact that, when it comes to the Horrors, the word “reinvention” seems to be bandied about all over the place, and yet again “reinvention” just seems to mean that they’ve found yet another sound to plagiarise. They’ve been wannabe Cramps/Gun Club/Birthday Party/My Bloody Valentine/god alone knows who else, and now they seem to have been captivated by a combination of late-period Psychedelic Furs circa “Book Of Days” and boring bland 80s empty bombast.

So many of the songs on this LP seem to follow the same format: approximately 45 seconds of really quite promising-sounding music where they almost make you think they have the beginnings of a decent idea, and then it just either falls apart the instant that Faris opens his mouth and starts to sing, or the music just kind of loses its way and meanders off into a mushy directionless drone. For me, Faris is still the eternal weak link in this whole set-up. He just doesn’t seem to possess his own voice. Every LP they put out, it’s “tonight Matthew, I’m going to be… ” (insert name of whichever leftfield rock vocalist he’s karaokeing this time). On “Skying” he veers between Butler Rep (as he did on “Primary Colours“) and Marc Almond, and once again fails to hit the heights of either.  And his lyrics are just as wincingly poor on this as they ever were in the past.

There are, as with the previous LP, one or two fleeting moments where things sound promising: the intros to both “Changing The Rain” and “I Can See Right Through You” are so Furs-esque that you can’t help but like the way they sound, but within less than a minute the illusion is over, and you’re brought back down to earth with a thud. Whereas the bands they so clearly love (and you can’t fault their taste in as much as they draw on the sounds of  some truly excellent bands) had an innate sense of structure, melody, a pop sensibility, or a direct mainline into the scuzzy soul of dirt-black rock ‘n’ roll, The Horrors simply don’t have it. They never have, they never will, no matter how hard they want it. Basically every track on this record is a lowlight, whether it’s the laughable attempt at arty rock-out weirdness on “Monica Gems” or the atrocious lighters-waved-in-the-air plodding finale of “Oceans Burning” which is so teeth-clenchingly po-faced it reminded me of nothing more than a goth Coldplay. Or there’s “You Said” which not only features the weediest Casio-type naff 80s keyboard sound I’ve heard in many a long year, but also the unbridled horror of Faris sounding dangerously close to Bono territory. Even more distressing is the fact that there’s a great deal of almost-baggy Madchester shuffle-shuffle plodding on a large proportion of the album too, most noticeably on tracks like “Dive In”. Dive in?.. no thanks, chaps, I’d rather dive into a vat of boiling jam than ever have to sit through this wretched waste of time ever again.

There will no doubt be cries of “foul” and “bias” in response to this, but I will state simply here and now, that I care not a jot! I listened from start to finish, and I honestly, genuinely, sincerely, from the bottom of my cold black little heart, hate this album. No wonder Von Pip was so aghast he couldn’t bring himself to listen to it again!  If memory serves me correctly, I gave “Primary Colours,” on a scale of one to ten, “less than one”. Well, I’m taking a point off for “Skying”.

I draw the heavy velvet drapes, I throw the brown paper parcel and its contents onto the roaring open fire, I collapse wearily onto an antique fainting couch and, by the flickering light of a taper candle, try to forget I ever heard this unspeakable thing in the first place.