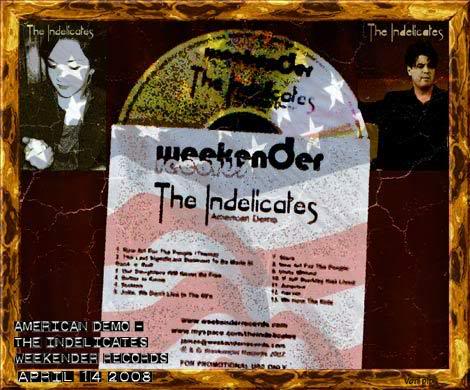 I don’t know about you but I can’t tolerate music reviews which prattle on about things like the “zeitgeist” and “ennui” yet singularly fail to let the reader know if they actually liked a certain album, song or single. I also hate this modern habit of foisting genius or legendary status onto people, who quite frankly don’t deserve it, Bobby Davro is not a legend, Frank Skinner is not a genius, for F**k’s sakes, there’s even a “ Post Office Ken” myspace page, he of the highly irritating TV ads featuring those dreadful warbling Irish wooden heads from Westzone or Boyslife or whatever they’re called. People are actually leaving him messages! “Ken, you legend”, “Ken u iz da Biz”“Ken you genius”etc, etc -. No, No, NO! Have these miscreants had transorbital lobotomies? Ken is an annoying tool, a vacuous corporate marketing tool- a living legend or genius? – I think not. This sort of nonsense fills me with a sense of ennui and surely cannot reflect the zeitgeist?

But back to the subject in hand, is The Indelicates debut album “American Demo” any good? Well, I can say, hand on heart it really does deserve the accolade “ F**king genius.” At this early juncture it’s already a strong contender for album of 2008. I had of course expected something special given the quality of the singles that have been released and the demos that have been floating about online for a while, but this has exceeded my already high expectations by a country mile. In short The Indelicates have produced a stunning debut album that can be enjoyed on many levels and covers a myriad of issues. It’s the sound of a band really finding their voice. They’ve rarely sounded more assured and passionate, and to quote dear old Johnny Rotten they really do seem to “mean it, man.” “American Demo” does that rare thing in music these days and actually challenges the listener’s preconceptions about pop. I can happily report it’s not always a comfortable experience, for example “Unity Mitford” is a beautiful song, musically and lyrically (“Like Romeo and Juliet/In a bunker, shot through the head”) but hang on a minute, should I really find this song moving, after all isn’t this about one of Britain’s most notorious Nazi sympathisers. Yet here I am singing along like Doris Day baking apple pie with a tear in my eye, about the lady, who many believe may have had Hitler’s baby.

“New Art For The People” may initially seem to be a heart wrenching, darkly romantic tale of obsessive love, “And it’s so sad but they’re so glad/ that you’re so bad for me/The dark days ahead and the blood/ on the bed and the cover of the NME” But wait -there’s something else happening here too, it transpires it may actually be more about self importance, selfishness, single mindedness and self harm, an obsession with a new aesthetic and exploitation in the name of art – Yes, let us make this new art and change the world, except ….nothing really changes, the world remains indifferent.

“If Jeff Buckley Had Lived” is an evocative poetic slice of genius which deals with how Jeff Buckley may have been treated if he had not foolishly disregarded the Health and Safety Executive’s prudent advice -“No swimming in rivers wearing steel toe capped boots, whilst listening to Led Zeppelin” “If Jeff Buckley had lived/And his voice still was heard/On the weak second album /And difficult third” Indeed, would Jeff Buckley have been so revered in life as he is now in death, could he have sustained the promise and have earned the iconic status that has posthumously been bestowed upon him- or would he have suffered what is commonly known as “the back lash” “If Jeff Buckley had lived/He’d have been short on the throne/And counted his life out/In an old rockstar’s home”

The album also features the singles, “Sixteen,” “Julia, We Don’t Live in The 60’s” and fantastic reworkings of “The Last Significant Statement” and “We Hate The Kids” all of which seem to take on a new potency within the framework of an album rather than just merely being great tunes in isolation. There is also the new single “America” which could well be an alternative west end show stopper in a parallel universe, complete with dancing soldiers and marching bands. It knocks Bernstein’s and Sondheim’s song of the same name into the proverbial cocked hat.

“American Demo” is powerful, angry, funny (yes kids they do have a sense of humour) poignant, honest, thought provoking, at times incredibly moving, and utterly brilliant. At the end of the day (sporting cliché alert) what more can you ask for from pop music? The Indelicates tackle challenging subjects with a lightness of touch and a subtlety, which, at times, make the Manic Street Preachers tendency for heavy-handed overwrought bombast appear about as consequential as a 2 Unlimited single. They have certainly raised the stakes, and posed the question- can this album be bettered in 2008? –Or is “Everything that follows a footnote?” We shall see, purchase “American Demo,” you won’t be disappointed and of course you could well contribute towards making The Indelicates uncomfortably fashionable.

“America” By the Indelicates