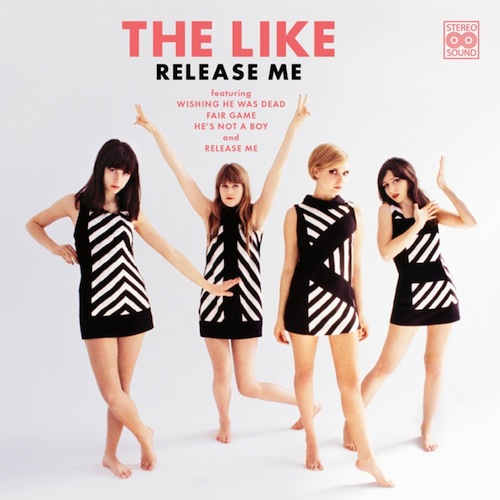 Some cynics may snipe that The Like’s return, replete with  Mary Quant makeover and a  sound that owes much to the girl-groups of the 60’s, is a desperate, slightly gimmicky way to reinvent yourself after a five year hiatus.  But the cynics obviously haven’t heard The Like’s second album ‘Release Me’ which is something of a triumph and shows the girls have both style and content.

Admittedly the news that Mark Ronson had been roped in to oversee production duties filled me with a deep sense of dread. I’ve always had a mental block when it comes to Ronson, both  as a producer and an artist and felt his rapid elevation to  ‘genius’ status to be somehwat premature, (I mean have you heard ‘The Bike Song?’ Surely it’s the fabled lost Cbeebies theme tune written by The Wurzels? )  But on this occasion Ronson has shown a degree of restraint, the biggest shock being the complete lack of his seemingly obsessive love for ‘honking’ ersatz Motown horns! But the real star of this album is the strength of the songs which for most part are chock full of irresistible pop hooks  as the Like deftly update the girl group sound with some style.

The album starts off well enough with the satisfying revenge fuelled romp , ‘Wishing He Was Dead’ , and lyrics such as “If I could kick his head in/  fickle little boyfriend/I’d be satisfied/If I could smack some sense into his senses/I might feel alright’ serve as a warning not to mess with chief songwriter, vocalist and guitarist Elizabeth ‘Z’ Berg.   The abum however doesn’t hit it’s stride until the title track “Release Me” which owes as much to Kirsty McColl’s ‘They Don’t Know’ as it does to Phil Spector or the Brill Building sound.  These songs are not simply sugary confections as the lyrics are often laced with no small amount of vituperation, The Like inhabit a world were men are cast as  duplicitous wastrels and often get whats coming to them. However the most biting  song  ‘Narcissus In A Red Dress’, a  dark song about betrayal, has a female protagonist,  “One minute she’s your best friend, then you watch her take your place” and may or may not be about the bands former bassist Charlotte Froom. ;)

Not everything works and although the album never overstays its welcome, at 12 tracks long it would possibly benefit from losing a track or two.  ‘Fair Game’ expends lots of energy  but  achieves very little  and ‘He’s Not A Boy’ strives for an early Blondie sound without ever really being wholly convincing  but such quibbles are rendered meaningless when they can produce such joyous tunes as the Motown infused ‘In The End’ which would no doubt have the ‘Anti Shake Your Tail Feather Collective’ surreptitiously shaking their tail feathers with gusto.

‘Release Me’ may well be  one of best pop albums of the year and fans of intelligent, well crafted, danceable pop  will surely be smitten with the tunes contained herein.  However one still has a nagging suspicion that if  say Richard Gottehrer had been at the helm to give this a slightly edgier, less polished vibe we might well be canonising ‘Release Me’ as a bona-fide classic.