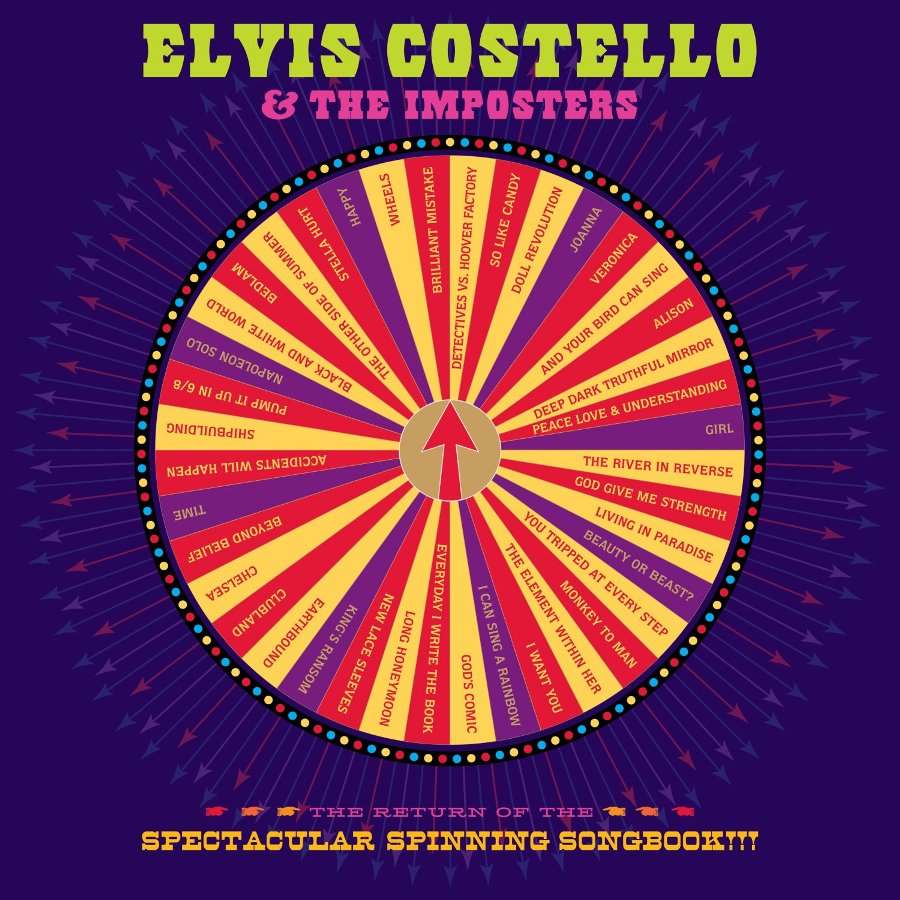 Not many albums are being made these days like the most recent release from Elvis Costello. Feel how you feel about the music itself, but the premise behind the album is not only unique but also wildly adds to its appeal.

Those who caught Costello and The Imposters on tour this past May during his most recent venture “The Revolver Tour” were also greeted with a view of a giant game show spinning wheel on stage. If you’ve ever seen the American game show Wheel of Fortune, it’s like that but with forty of Costello’s song titles to choose instead of money. Fans in the audience were then invited onstage to spin the wheel and pick the fortune of what song would be played next.

The concept is not an original one as the stage show was first introduced in November of 1986. The night involved a MC hosting the performance and featured several surprise artists during the height of its time such as Tom Petty and The Bangles. Hartlepool Museum of Showbusiness Mahcinery is now home to the original donated wheel while the new one was created based on the original blueprints.

Honestly, the album The Return of The Spectacular Spinning Songbook that came about as a result of the tour needs that much background information to be fully understood. In fact, the album came with a great deal of extra memorabilia for fans like vinyl and a hardcover book to make the purchase an entire music experience. But this experience is not a cheap one as Costello himself has been quoted on how unaffordable the collection was when it was first released and pushed to get the price reduced.

Spinning Songbook wouldn’t be what most would traditionally consider a concept album, but it certainly has a concept that shapes the listening experience. The entire sixteen songs are all recorded off a few nights of the tour in LA with oldies but goodies, just not necessarily the ones you’d expect to hear on a Costello tour. While most of the tracks are upbeat and heavy in bass like ‘Mystery Dance’ and ‘Man Out of Time’, the lovely ‘All Grown Up’ offers an intimate moment with only Costello and the piano.

Unfortunately, the sound quality on the album is a bit difficult to listen to at times which is the risk you run when recording live. Elvis Costello has been making music for decades and what has brought about his longevity is that the sounds he creates are always respectable. “Pump it Up” will always be one to put on and turn up. However, Spinning Songbook, at times needs to be turned down because the balance in the recording is difficult on the ear.

All together, Elvis Costello has done it again by creating another new album off the back of his most recent tour. He continues to prove that no matter what music he makes, it’s going to be an experience worth checking out.