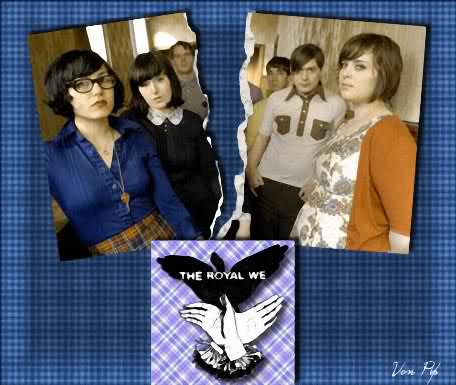 “The opening track of The Royal We is a little misleading. ‘Back and Forth Forever’ doesn’t quite seem to fit the rest of the album, but when a band only has ten songs to their name (including two covers and one b-side on their first and only single), they probably can’t afford to be choosy about what goes on their album. Anyway, the song itself is an adorable, almost sickening, love song, and while the tone is slightly different from the rest of the album, it’s a lovely opener. The main part of the album then kicks off with ‘All The Rage’, that lone single. It’s also one of the highlights of the album, which, although it has a lot of potential, is held back by the fact that every single song on it was recorded as a demo. It’s a shame that potential will never be realised. Jihae Simmons’ twee and witty lyrics do however carry the album well enough to make you forget the recording issues, along with sweet ooh-ooh-aah backing vocals from the other band members.

Another highlight of the album is the song I pegged as a single (and still think would have been a better choice), ‘I Hate Rock N Roll’. With an infectious chorus and such fantastic lyrics as “Ooh, you’re sexy like T-Rexy/Put that body away (hey hey hey)”, I defy anyone to not fall in love with it and find themselves singing it at all available opportunities. ‘Willy’ is a sweet song about a socially-awkward boy on New Year’s Eve, yet the singer seems to like him anyway (“Have a, have a, have a, have a, have a, have a happy new year, Willy…”), and a definite grower. The album ends with one of their covers, Chris Isaak’s ‘Wicked Game’. The instrumentals are certainly fantastic, but Jihae’s vocals leave me feeling slightly disappointed after the brilliance of the previous track, ‘French Legality’, which features Jihae screeching her little heart out for no apparent reason – the best kind of screeching.

As it is, you can hear fully half of the album on the band’s Myspace.  Standing at eight tracks and only twenty minutes and twenty-seven seconds, it feels as if you’re being let in on this fantastic secret and then having it snatched away from under your nose just when you really start enjoying it. The Royal We play their last gig, and the album launch gig, on November 5th in Glasgow.

The Royal We is released by Geographic (distributed by Domino Records) on CD and LP from Monday 5th November, 2007. ‘All The Rage’ can be bought as a limited 7″ or download.”

0 thoughts on “The Royal We – Album Review”