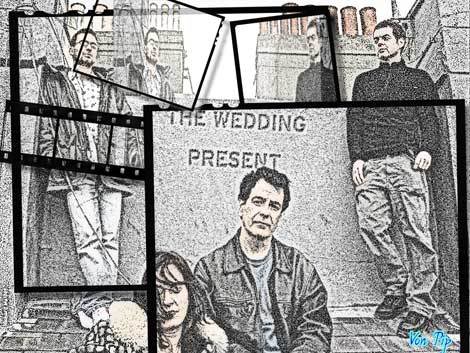 It’s hard to believe its twenty years since the release of The Wedding Present’s seminal “George Best” album, listening to it nowadays you realise what a classic collection of songs it is. If anything, it sounds even better in the present than it did all those years ago,the buzzing hornets nest guitars, the lyrics, which are as sharp as they are witty, all played at a break neck pace…..…….Now I might not believe its 20 years ago, but tonight at a packed Academy the evidence is all around me, hardcore “Prezzie fans” wait in anticipation for their hero, they may be a little paunchier, have a little less hair, but they are as enthusiastic as ever. As I edge my way to the front, negotiating several “well fed” gentlemen, I look back at the packed crowd behind me- I cant help feeling I’ve just wandered through a spec savers promotional photoshoot-(god knows what crowds at Who concerts look like!) and I wonder if the years have been slightly kinder to David Gedge.

When he arrives on stage I’m pleasantly suprised to see he hasn’t changed at all and looks as fit as a fiddle ! “You’re a genius,” somebody shouts, at which he feigns false modesty, “Fat Bastard” laughs another . “Fat ? That’s a bit unfair” retorts Gedge grinning sardonically, “A few pounds over maybe, but surely not…. fat?? – Anyway It’s great to be back in Manchester “ he continues, which always goes down well in Liverpool, as the band launch into a brace of Cinerama (Gedges other band)songs. Then a chap dressed up as a white rabbit holding countdown cards,wanders on stage, eventually stopping the cards to huge cheers with one printed bearing the album sleeve image of the legendary Manchester United booze hound (the only time a Man U shirt appearing in Liverpool will ever get a cheer, I wager ! ), and its heads down as “George Best” is played in its entirety as part of the set . Every song is greeted like an old friend,“Everybody Thinks He looks Daft,” “What Did Your Last Servant Die Of”,“My Favourite Dress” and “Shatner” have the crowd moshing with delight. “Don’t play “Nowhere Fast “ one of the stouter more mature fans breathlessly shouts…. ” I need a rest!!” Gedge and his band are on fire and the songs that where the soundtracks to many of the audience’s youth sound as fresh and as vital as ever.

It really is a case of an old master showing the Indie kids how it should be done,“Let me know when Razorlight sound this good ” deadpans Gedge after playing a newer song “ Don’t Take Me Home Until I’m Very Drunk “ Of course,he’s right, the Wedding Presents buzz-saw guitars, and wry, intelligent lyrics make Mr Borrels insipid, inane warblings seem even more insignificant. Although Gedge has never been blessed with the sweetest of voices he is undoubtedly one of the countries best, yet most underrated lyricists. His beautifully observed bitter sweet songs explore love, loss and the complexities and misunderstandings within relationships that deftly manage to combine both the poetic and the down to earth. They are of course great to sing a long to after a few beers, which tonight’s audience do so with great gusto.

The biggest cheer of the night comes as the set ends ” See you again “ says Gedge “Maybe next year?” He doesn’t bother with ego massaging fripperies such as encores and the crowd go home happy, knowing that even if the lumbago plays up in he morning it was worth it. Gedge’s songs may often lament the fact that all too often he doesn’t “get the girl” but on this evidence he’s still got the charisma, the style and the talent that have made the Wedding Present such an influential act……and long may he continue…