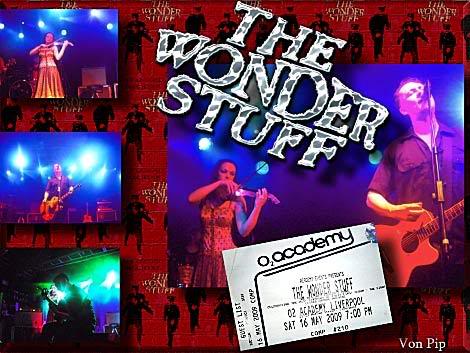 “Unbearable” (Live) By The Wonderstuff

Back in the late 80’s, the Indie scene had lost its sense of humour, it was full of pale, miserable tortured young poets who wore long Macintoshes and hid beneath their fey, floppy fringes in a look that seemed to combine a maudlin  Colombo with Brideshead Revisited.  Their music alas was often a joyless, pretentious exercise in existentialist morbidity, and well, a wee bit up its own arse to be honest.  Enter The Wonder Stuff, a bunch of unruly long haired lads from the Midlands who wrote snarling, witty acerbic pop songs and didn’t really give a flying “fook” what people thought. Fronted by Miles Hunt, an outspoken young fellow who appeared to have mastered John Lydon’s  maleovlant stare down to a tee  and who took  great delight in playing the press at their own game, it  seemed this was just what the doctor ordered.  At  last we had a band who weren’t “arch” art school poseurs but smiling assassins filled with  cynicism and armed with a clutch of  catchy, sarcastically witty indie pop/rock songs,  a band who were about to bring a splash of  colour to the depressingly monochrome late 80’s music scene.  After a string of singles they unleashed an irresistible debut album “The Eight Legged Groove Machine”. It was an instant classic, even the NME gave them a  9/10, and  the band undertook their  infamous  “Groovers On Manouevres” UK tour in order to promote the album.   I was there all those years ago at the dawn of time  and do you know what?  They were f**king fantastic live. It was the first of many Wonder Stuff gigs I was to attend over the years.

Fast forward to 2009, tonight’s show at Liverpool Academy is part of a string of dates to mark “The Eight Legged Groove Machine’s” 21st Anniversary. The “Stuffies”  may have lost a number of original members,( Rob “The Bass Thing” Jones sadly  died in  July 1993 and  drummer Martin Gilks  passed away in April 2006) but the line up still includes founding members Miles Hunt & Malc Treece.  The band arrive on stage without a word and immediately launch into the albums opener “Red Berry Joy Town” which is greeted with enthusiastic howls of delight from the audience who are definitely up for it and here to enjoy the  night. ” No, For The 13th Time” follows at break neck speed as does “It’s Yer Money ” as Miles sings “Forget Your Heart It’s Your Bank I Wanna Break/It’s Just Yer Money I’m after Baby”, rather fitting given the recent banking meltdown.  The set continues and the years haven’t diminished the bands energy or indeed Miles snarling sarcastic stage presence, and strewth ! Hasn’t Martin ” Fiddly” Bell aged well? I don’t remember him being that attractive during the “Hup” years.  My mistake, as I suddenly recall that Bell is still resident on Uncle Miles’ naughty step after throwing his toy’s out of the cot a number of years ago.  Happily his boots have been more than filled  by the elegant, classically trained violinist Erica Nockalls, resplendent in a glittering  gown that was golden, not green as she joins the band on stage.

“A Wish Away” provokes another moshing frenzy from the audience, and “Unbearable” sees the crowd go, well… ape-shit,  for want of a better word. ” I didn’t like you very much when I met  you “snarls Miles through his teeth, eyes glittering with malicious glee  as the crowd respond in time honoured fashion with   “And now I like you even less”. As the band  seek sustenance  from their on stage drinks of choice ( bottles of  red wine) a cretinous oaf  (erm, well, me actually )  shouts “Come on Miles, play fair, lets have  “Dizzy” to which Miles responds “Did some c*nt just shout  play” Dizzy? ” As the set progresses he also gives us the background to a number of songs,  for example “Mother and I” must be one of the few songs in pop inspired by professional Scottish midget and sometime comic, Ronnie Corbett  “Look I was young, it’s not about me,  it was actually inspired by the sitcom “Sorry” ok?” explains Miles.


At times I feel I have been transported back 21 years through some sort of musically induced  worm hole… but not for long.  I soon  realise  it’s not 1988 ,  nor am I  amongst skinny, featherweight teens and  I am brought crashing back into 2009  as a  balding middle-aged mosher, weighing at least 20 stone  lands directly on my foot.  Coincidently “Poison” is just starting and as I hop about in no small amount of  agony  I hear Miles snarling the mantra “Nobody wants to get hurt, nobody wants to hurt anybody“.  Yes, yes,  but tell that to the demented sumo who seems intent on using my foot as some sort of  spring board for his “idiot  manoeuvres”.  I hobble away cursing this klutz but am soon revived as the encore includes “Groove Machine” era  B-sides including  Hunt’s tribute to the  moon faced, man-voiced,  Rick Astley AKA God’s Own Tea-Boy.  “Astley In the Noose” has always been a crowd favourite but apparently it’s not one of  Miles’ as he informs us he “F**king hates it” and has often thought of updating it to include that “vile creature, Robbie Williams”.

Another encore and the band proceed  to play some of their own personal favourites such  as “Circle Square” and   “Golden Green”  which Milo announces was ” the time when we  invented Country and Western”.  The evening draws to a close with the inevitable “Size Of A Cow”, “the song that made us pop stars” sneers Miles, who really seems to be enjoying himself. Once again the crowd dance and mosh wildly  as I carefully avoid the psychotic sumo whose face I note,  has turned an alarming shade of puce and who is now leaping about once more  indulging  in more of his “moves” with all the grace and agility of an arthritic Hippopotamus with constipation. But hey, he’s having fun. We all are.

The Wonder Stuff were always a great band live and tonight’s set proved they are as good as ever, here’s to the next 21 years eh ? Now that would really be “far out.

The Original Line Up

“Astley In The Noose” By The Wonder Stuff

“Unbearable ” (Live) By The Wonder Stuff