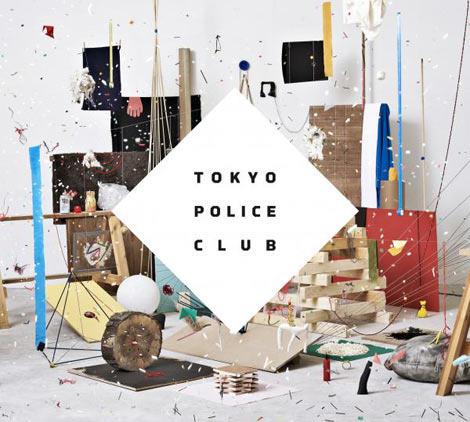 It’s been two years since Tokyo Police Club’s full length debut album ‘Elephant Shell’ and their much anticipated follow up ‘Champ’ proves that they still have the ability to produce ‘arresting’, quirky, indie rock.

However there are at least three tracks on ‘Champ’ that, whilst not exactly spoiling the album, certainly render it some way short of being a classic. This is a shame because when Tokyo Police Club get it right they sound inventive, energetic and achingly cool.  Dave Monk’s laconic drawl, falling somewhere between Julian Casablanca’s and Bob Dylan plus his clever literate wordplay, have always made Tokyo Police Club stand out from the indie wannabe’s and ‘Champ’ is almost a great album. “Favourite Food” is full of tender melancholia that manages to be strangely uplifting,  ‘Breakneck Speed’ is a feisty, angular spirited piece of  rock n’ roll whilst ‘End Of  Spark’ and ‘Wait Up (Boots Of Danger)’ are both  masterclasses in eccentric , intelligent indie.

But alas, and here’s the rub, there are a couple of songs that could be roasted, garnished and served up as the main course on Thanksgiving Day.  The dire Weezer doing cod-reggae horror that is ‘Gone’, the yawn inducing ‘Big Difference’ and  the mesmerically bland ‘Not Sick’, all come across as clunkingly derivative and dance precariously near the precipice of landfill indie.

All in all Tokyo Police Club demonstrate they are neither Chumps nor Champs and have produced an album that occasionally flirts with both mediocrity and brilliance without ever really fully consummating its relationship with either.

With a collective name that sounds like a gang for teenage wizards and screams, in eight foot neon high letters, ‘we’re MAD we are” I admit  to approaching this EP with some trepidation. However the old maxim ‘never judge a book by a cover’, or in this case ‘never judge a band by a dreadful name’ is sage advice indeed as this is quite simply a dazzling EP, bursting with energy and innovation.

It’s a veritable explosion of bliss which embraces many styles from surf to shoegaze, from 60’s pyscheldic rock to a strange form of choral folk. With all six members sharing the vocal duties this is quirky, catchy and at times quite beautiful pop music, not unlike a less melodramatic version of  The Arcade Fire or  the Polyphonic Spree. Beguiling, eccentric, magical and utterly brilliant – forget the name and indeed the acronym- and embrace TBHOTTOOH’s music, for if you have a heart that still beats it will leave you both  bedazzled and bewitched.

0 thoughts on “Reviewed . .Tokyo Police Club- ‘Champ’ /The Bewitched Hands On The Top Of Our Heads- ‘Hard To Cry’ EP”