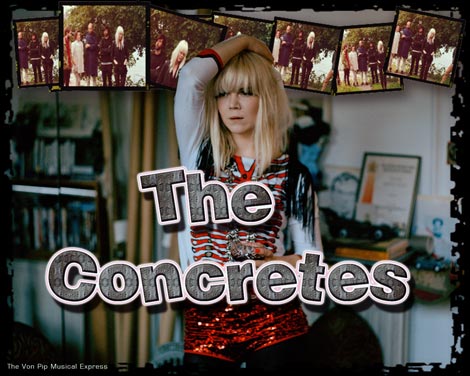 “Apparently the Concretes are embracing that whole 80’s thing” shrieked my not quite enigmatic contact and Sweden’s answer to Gok Wan,  Anders Panders.  Despite my offer of copious amounts of alcohol he resolutely refused to shed any more light on this somewhat sweeping statement, and rather bafflingly seemed to think that continually tapping his nose in a conspiratorial manner was somehow endearing and in no way irritating.  But what on earth did he mean? Surely one of Sweden’s finest musical collectives of recent years were not about to start expounding the virtues of unbridled brutal neo liberal laissez-faire capitalism?  Did ‘doing that whole 80’s thing’ mean that they’d decided to sport ludicrous Kevin Bacon style mullets, replete with leg-warmers worn over skin tight, tie dyed jeans? Even worse had, The Concretes persuaded 1980’s production line (s)hit-makers, Stock, Aitken and Waterman out of retirement to produce their latest album!!???

Thankfully, it transpired that Anders, who is often prone to tabloid style exaggeration and hyperbole had merely discovered that The Concretes have employed  ‘less guitar and more keyboards” on their latest album “WYWH”, which,  let’s face it, hardly constitutes an 80’s makeover.

Rest assured that “WYWH” has about as much in common with the recent 80’s revivalists as George Osborne’s spending review has to do with fairness.  It emphatically proves that anybody who has previously written the band off following the departure of former vocalist Victoria Bergsman will soon be choking on large slices of humble pie because “WYWH” is without doubt, a triumphant return.  The Concretes have reinvented themselves and in doing so produced an album that sparkles with a fragile beauty and a sense of yearning which is perfectly communicated by former drummer and lyricist Lisa Milberg’s airy, delicate ethereal vocals.

They say it’s their ‘disco album’ but it’s more disco in a stylish, sensual European sense, than the hairy chested get your funk on, brash glitter ball variety of the 1970’s. It’s also their finest album to date  and is a wonderful example of how brilliantly written pop music can transport you to another place, or to paraphrase E.W. Howe, WYWH make you feel homesick for something you have  never had, and never will have.  In essence the world  just somehow seems a much improved place for having  this album in it . . .  innit ?  ;)          9/10.

After being enthralled, enraptured and let’s face it, seduced by ‘WYWH’, we wished Lisa Millberg was here and lo !……..

VP:  Hello Lisa, first question has to be,  after a trio of albums in quick succession (2005, 2006, 2007) , three years must  seem like an eternity for fans and indeed the band, why did “WYWH” take longer to produce than previous albums?”

LISA:  Hello VP …Basically the quick succession that came before “WYWH” was our way of coping with all the troubles that happened along the way.  But we could only keep that up for so long. When we did the third album we even named it ‘Hey Trouble’ as if to prove to ourselves that we were still a band after Victoria had left. We needed to know we had something. But after we toured that album I think we felt in a way we had proven that but we also felt we weren’t having much fun. It took three years to get that will back. But once we stopped trying to force it, it really came pouring back. This is the first album we’ve done since the début that I have really enjoyed doing.

VP:  And what’s this I hear of one band member joining the circus during your hiatus?

LISA: Ha it’s true! He was hired by one of those avant garde circuses but sadly as a musician. Waste of talent really, he is very lean and he is also faster than the wind on a fixie so I am sure they could have found much greater challenges for him…;)

VP:  There’s talk that “WYWH” has seen the Concretes go “disco” , but it’s certainly not of the medallion wearing Studio 54 variety . The guitars are certainly less up front, what sort of sound or vibes were you going for?

LISA: I think disco is in the eye of the beholder. I find it can be whatever you like as long as it makes you tap your feet. I’ve always thought Stones made some of the finest disco around. Or Marhall Hain’s ‘Dancing In The City’ for that matter. Grumpy, a little reluctant and a little on the slow side, but really so very excellent. That’s what I like, not the glittery euphoria in wedges and flares, that tells me nothing about anything. There has to be fight in there somewhere, an urge to cover up a sulky mood or to better a night when you’re feeling lonely.

I’ve realised there will always be a sadness to the songs we write but that’s no reason to wallow in it. And that makes disco the perfect aim. Happy and sad, eye to eye on the dance floor.

VP:   And just to confirm, “WYWH” stands for ‘Wish You Were Here” not something obscure such as “Wild Youth’s Wistful Homage”  or “William, You Where Horrid” ;)

LISA: ‘WYWH’ stands for whatever you want it to stand for, which is why we kept it to the initials only. But yes, for me, most days, it stands for ‘Wish You Were Here.’ Or Him. Or something like that.

VP:  Lyrically would you say “WYWH” has an overriding theme?

LISA: Yes, and it’s pretty much summed up in the album title. It’s about love, loss, longing. About the wandering mind and heart.

VP:  You’re touring the UK in December , you took over lead vocal duties in 2007 and at the time said you’d  never planned to become the bands singer, and that the thought of being at the front of the stage ‘petrified’ you. Has this fear recede somewhat or does it still make you nervous?

LISA: It’s true, I was petrified for at least a year. Now, I kind of love it. But it’s got to do with expectations and making it your own I think. When I started I felt I had certain expectations on me to be a certain way. I think it was mostly from myself but that really doesn’t work at all. Then I just stopped trying to be something I’m not and now it makes much more sense. Having said that, it can still be quite intimidating.

VP:  Not only do I love the album, but the art work seems to perfectly convey the atmosphere. Who designed it and what was the idea behind it?

LISA: Oh thank you. It’s a century old painting by Swedish artist Arthur Bianchini. I do all the art direction for us and with this album I knew I wanted Stockholm on the cover and preferably a painting. I searched everywhere and had people take photos, send me drawings, stamp collections, old posters, etc but nothing felt right until my Mom sent me a photo of this painting, which belongs to her boyfriend. The moment I saw it I knew it was perfect. It’s such a stunning image and the view is the best representative of our Stockholm. It’s the view from up a hill right next to our studio and it shows the southern part of town where we know every brick of every pavement. I also love that it’s so blue,  it’s got that perfect shade of blue, like one of Dennis Wilson’s old t-shirts. The perfect colour for ‘WYWH’ I think.

VP:  What sort of music have you been listening to / getting influenced by in the last couple of years? Which bands /artists have impressed you most?

LISA: There are so many brilliant bands and we all consume a lot of music but from the top of my head, and if we’re talking contemporary bands some of the ones that stand out to me are Dirty Projectors, My Morning Jacket, James Blake, Ariel Pink and a lady I discovered only the other week: Katell Keineg.  I have only heard her most recent album ‘The Mermaid Parade’ but it blew me away.  I also love Idiot Glee, How To Dress Well and the Shangaan Electro comp, with mad South African electro, that Honest Jon’s just put out. I could go on for days. There are so many great things around.They don’t influence me in the way that I wanna do what they are doing,  I just think they are all excellent and I think they all do their own thing, which would be the inspiring bit…

VP:  As a band The Concretes have now been together in one form or another since about 1995 , what do you think have been the biggest changes you’ve seen on the musical landscape over that period?

LISA: I suppose that would have to be the physical albums vs download thing of course. When we started out the album sales pretty much reflected how many people were listening to your music. These days they will only show you who’s got exceptionally high morals or bad computer skills. But musically things have gotten very interesting in recent years. Whilst I find the blogosphere to be a little too narrow-minded at the moment- it’s all palm trees and witchy glow wave? I think music generally is quite challenging compared to ten years ago.  Even some of the billboard stuff is quite elaborate in terms of sounds and production. I like that, I think it’s good that people still feel the urge to be creative and push things forward, whatever the reasons may be. So I think it’s all good and what’s not will be. Fear not for music.

LISA: ‘It is really very good.’

VP: ‘I certainly agree with that!’

“You Can’t Hurry Love” -The Concretes