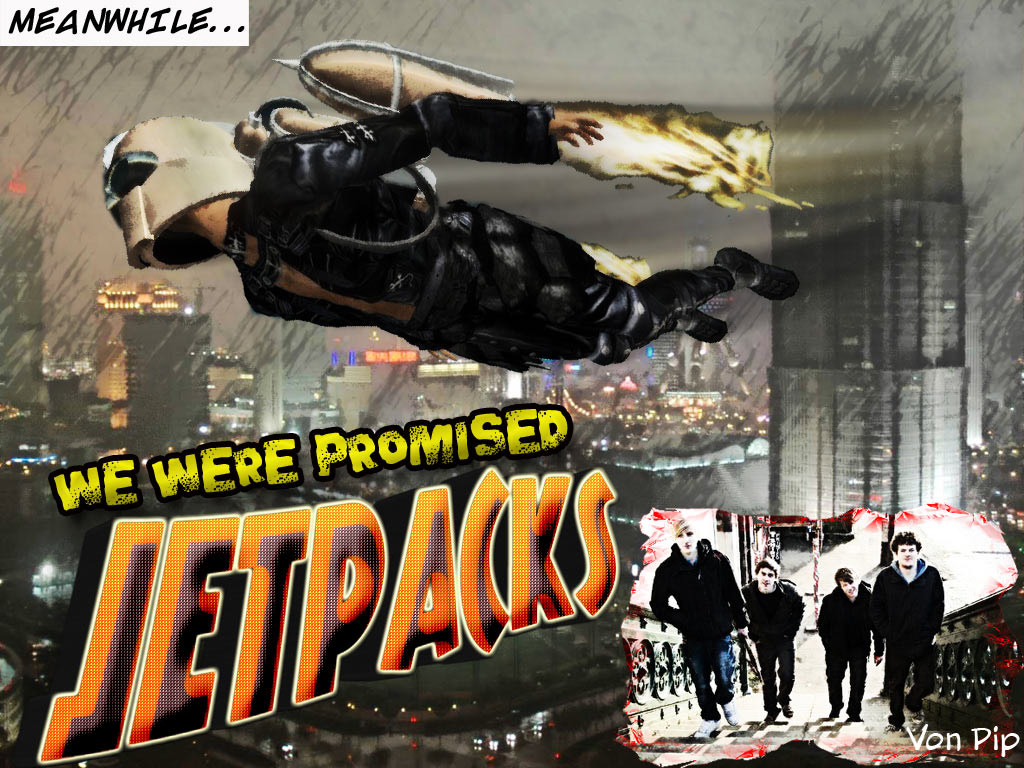 People tell me that choosing a band name can be quite a difficult process. However as a former member of a thrilling musical ensemble I actually found bestowing a collective name upon our venture the least of our worries, our problems derived from an acute lack of musical ability and the fact that we weren’t exactly overwhelmed with a surfeit of decent material or even anything that even resembled a tune.  As songwriter I take full responsibility for penning such cringe worthy epics  as “Global Chernobyl”, “Bryan Ferry, A Cross, The Mersey” “Hair Like Bill Oddie “, “Multi-Coloured Sweat Shop” and the rather moving, evocative tale of unrequited love  “You Can’t Leave Me If You’re Dead.  Yes Distant Echos failed for one reason and one reason alone -we were utter shite. The lesson? Having a quirky, interesting or cool name and songtitles simply won’t cut the mustard; it’s the tunes that matter!

Mercifully Scottish band “We Were Promised Jet Packs” have no such worries and have songs every bit as interesting and exciting as their name might suggest.   The Scottish 4-piece came to FatCat Records attention whilst they were having a gander at one of their signings, Frightened Rabbit’s, myspace chums.  A subsequent tour as main support for Frightened Rabbit followed and earned WWPJ rave reviews.   They have  been  featured in  NME, The Fly, WIRED, Vanity Fair and Clash, were chosen as Q’s Track of the Day and played by the unintelligible, hyperactive, kiwi fruitcake, Zane Lowe.  A demo version of ‘Quiet Little Voices’ also recently won Zane’s  ‘Fresh Meat’ vote.

Hot off the heels of a successful SXSW jaunt (performing alongside Glasvegas and Primal Scream) and with a debut album in the offing, 2009 looks set to be an exciting year for WWPJ . We had a word with lead singer/guitarist Adam Thompson about all things musical.

VP:  What was the motivating factor in forming a band?  Was there a catalyst or was it just something that seemed a natural thing to do?

ADAM: It just happened.  We were all friends who happened to be able to play instruments. There was no big meeting, or mission statement or anything like that!  We’re all pretty happy we did now though!

VP:  The band name is pretty unusual, did you have other names and what made you settle on this one?

ADAM: We had some more names that were floating about. We set ourselves a deadline, and when it came we had to settle on what we’ve got now. It’s worked out well, I suppose. It’s really hard thinking up band names! Everyone always goes “Aww that’d make a great band name” when they hear stuff, we all still do it now, but to pick one for your own band is pretty hard.

VP:  You’ve played SXSW , how did you get on the bill and how did you enjoy the experience?

ADAM: We applied for funding from the Scottish arts council who were amazing. They gave us and a bunch of other bands a pile of money so that we could buy plane tickets over and find a place to stay, they were brilliant. As they were sending us, that’s how the Scottish arts showcase came about, the other shows were all sorted by the guy who’s in charge of the U.S branch of  Fatcat, our label. Playing there was loads of fun! We didn’t really get a chance to take in many other bands, as we were pretty busy, but we got a real taste of the festival and enjoyed it a lot.

VP:  You have a single out, “Quiet Little Voices’ on May 4th, as the lead up to your debut album. How the process of choosing a lead single work does, do the band chose, the label, or is it a case of a consensus between the two?

ADAM: I think most bands just get told what it is, but Fatcat are such an artist-centred label that we have a compromise. This one was a natural choice anyway I think. It was good for the label as the demo had done pretty well; it’s been played on a few radio stations and all that. For us, it’s our oldest song, so it will be good to have it out of the way! We still enjoy playing it live, but can’t bear to hear it! We did a video for the song and had to stand in a room and listen to it 10 or so times. Not a fun day!

VP:  What have you got lined up for the rest of the year?

ADAM: The album comes out June 15th. We’ve got our first ever headline tour in June which is very exciting. We have a couple of summer festivals lined up and we have our final exams at university, getting them out of the way will be fantastic! We’re planning another single for after the album comes out, but anything beyond that will depend on what doors are opened with the album release, if any. Hopefully a couple of people will like it and we can have a bit of fun…

VP:  What sort of music has been an influence on your sound?

ADAM: A lot of our friend’s bands in Scotland, obviously Frightened Rabbit and Twilight Sad, like everyone else. Nothing that really goes back too far, we tend to listen mostly to music from the last few years, bands like Hot Club De Paris for the picky guitar stuff, or the Longcut for the soundscapes…

VP:  It’s a cliché, but have sites like myspace been influential in helping you get off the ground whilst awaiting your jetpacks?

ADAM: Definitely. One of us once said in an interview that it basically managed us for a few years, which is a good way of putting it. It was just so easy to find promoters in your city, and as soon as you find them they can instantly hear what you sound like and book you or not. Also, for finding local bands in a similar situation as you and keeping in touch with them, booking your own shows. it’s been incredibly useful.

VP :  What’s the music scene like up in Scotland these days? Any upcoming bands you’d recommend?

ADAM: It seems to be really good. In Glasgow, where we’re based, we’re not really part of a “scene” as such, it’s more just a bunch of friends who all play in bands. we thoroughly recommend Endor, Lyons, John B McKenna, Dupec, Big River. There are loads…

ADAM: For me, the newest Spinto Band album. I always loved the one before last, and we supported them in Edinburgh recently,  I was embarrassed that I hadn’t bought the newest one. We then saw them at SXSW and I still hadn’t bought it.  But I have now. Don’t tell them I didn’t have it all along…

ADAM: We hope it’ll be alright.

“Quiet Little Voices” By We Were Promised Jetpacks

0 thoughts on “Light The Fuse -We Were Promised Jetpacks Interview”